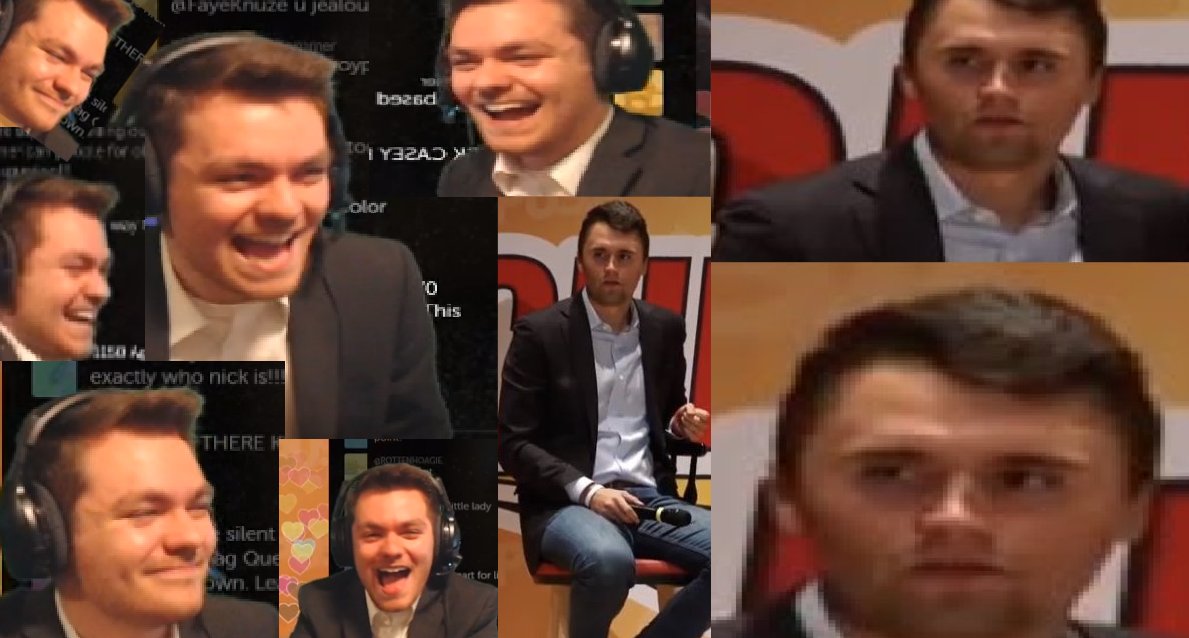 Over the past several weeks a wave of memetic energy has moved from the internet to the real world and it has been incredibly entertaining to say the least. The dissident America-First right, which represents the values, principles, and ideals of hundreds of millions of Americans, has clashed with the beltway gatekeeper Conservative Inc right, which represents the interests of big business among other globalist elites while pretending to represent The People.

Charlie Kirk represents the youth of the beltway Gatekeeper Right. He is featured on Fox News. He hangs out with the President. He has big donors who fund his organization. He has, and always has had, the power of the Conservative Inc machine behind him.

Charlie and other gatekeeper beltway types hide behind the MAGA movement as a shield. They support mass legal immigration. They do not care about the demographic change happening in the United States of America and the inevitable outcomes of that change. They support nationalists, as long as they aren’t American nationalists.

Charlie has also never been banned or dealt with any form of Big Tech censorship on any meaningful level. Big Tech does not see him as a threat, because he’s not. In the end his ideas are the status quo of the globalist beltway gatekeeping insiders in the swamp.

Charlie also claims to be a Christian, yet his “libertarian” ideals seem to outweigh any principled conservative Christian stance on social and political policy issues. People like Charlie Kirk are why the right has been steamrolled on social issues for decades.

My own personal experience with Charlie Kirk on a professional level was abhorrent. In November and December 2018 Charlie Kirk texted me and asked me if Gab was interested in sponsoring an upcoming TPUSA event. I ended up writing a check for thousands of dollars to sponsor the event only to be pulled as a sponsor last minute.

At first, Gab was added to the event website as a sponsor. When folks on the left found out about this, a few of them tweeted about it but had little fanfare. To my surprise, within a few days our logo was removed as a sponsor. When our lawyer contacted Charlie and TPUSA we got no response. Thankfully our check was never cashed.

Shortly after this experience Charlie started promoting a “free speech” app, which then made the rounds through the rest of the Gateway Right channels like Fox News. That app has since tanked in usage while Gab has exploded in growth over the past year.

I will forgive Charlie for all of this, as Mark 11:25 instructs, but I will certainly never forget.

Nicholas J. Fuentes represents the youth of dissident America-first right. He has been wrongfully smeared by gatekeepers on both the left and the right. His policy positions and political beliefs are held by millions of Americans.

Nick talks about the issues that everyone is thinking about, but no one will dare speak about. He doesn’t have wealthy donors. He is not part of the beltway “cool kids club,” which makes him cool. Nick and his fans, along with the millions of Americans who hold their beliefs, are the real counter culture and the future of the American right.

The Gatekeeper Right has been attempting to subvert this populist and nationalist movement since it started in 2015. They put on big events around the country, ramped up funding from big money donors, and totally ignored and even no-platformed the America-First dissident right.

When Memes Move To The Real World

The America-First right has discovered that memes are incredibly effective offline if channeled properly. Taking memes to the real world and using them to mock the Gatekeeper Right is an effective strategy. Asking these gatekeepers the difficult questions that no one in their echo chamber media bubble is going to ask is how the America-First right will win hearts and minds.

The Gatekeeper Right is dismissing this strategy as “trolling,” and guess what: it is! The reality is, it doesn’t matter. The America-First right is everywhere. They are at your events. They are in your organizations at every level. They will be everywhere that you are and will challenge and meme on you to expose your hypocrisy and gatekeeping.

This is only the beginning.

The America-first right has three years of built up memetic energy and that energy is pointed at the Gatekeeper Right.