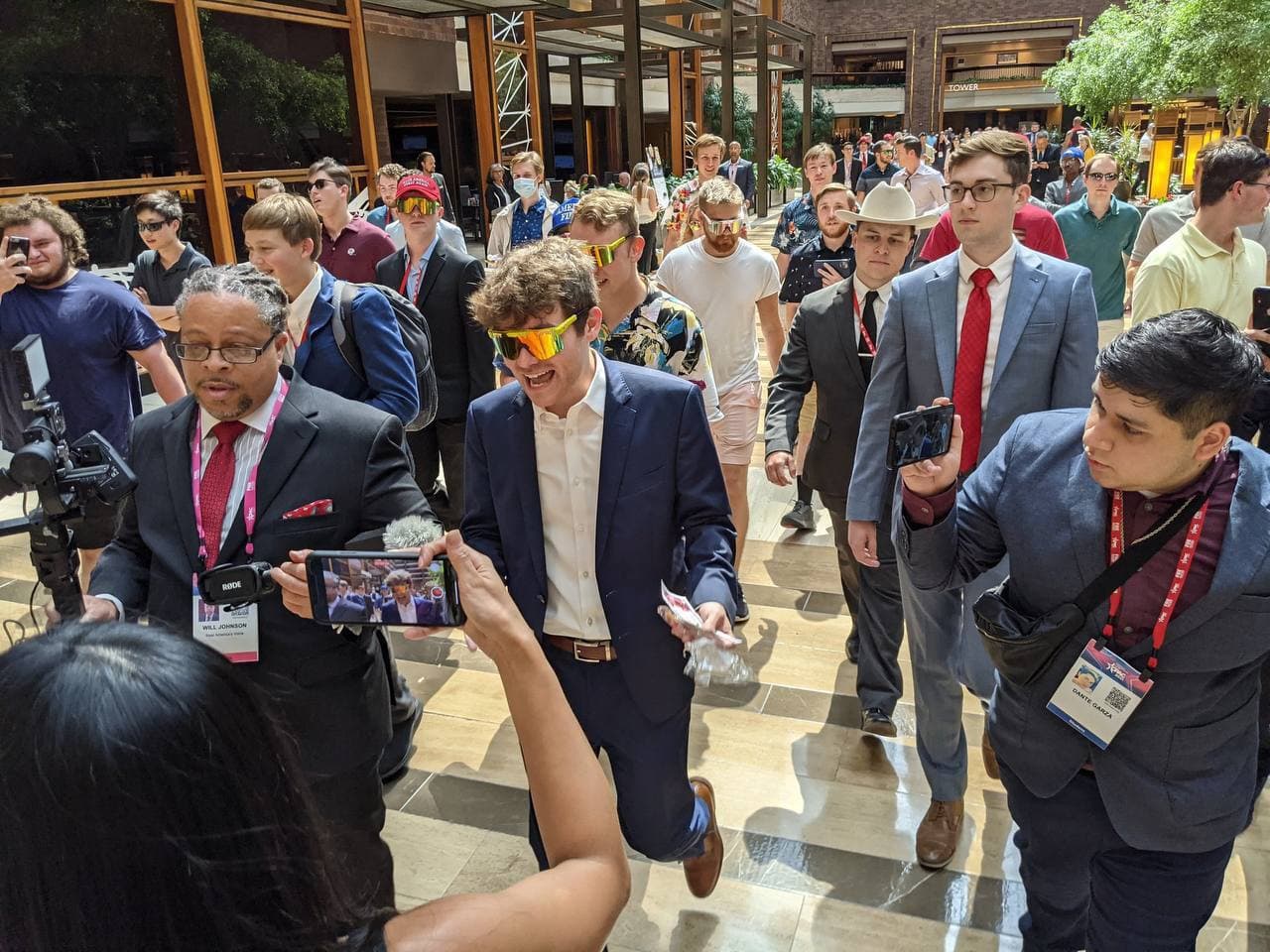 You may have heard that CPAC, the establishment right’s cool kids club conference for “conservatives,” was going on in Texas this weekend. President Donald Trump was there among many Republican members of Congress and the familiar faces of Paul Ryan’s controlled opposition network Fox News.

The most powerful speech wasn’t delivered at CPAC, not even by President Trump. Instead it was delivered from a hotel across the street by a 22 year old college drop out who was banned from Twitter and thrown out of the “Uncanceled” CPAC event.

I encourage you to watch his speech in full before your rush to any judgement and see what the “most dangerous man in America” has to say for himself.

Is Nick Fuentes what the talking heads on Fox News and the controlled opposition at Breitbart said he is, or is he perhaps saying something compelling that very powerful people, on both the left and the right, don’t want you to hear?

In an age where young, straight, White, Christian men who hold Biblical values are being treated as second class citizens for their political and religious beliefs, Nick Fuentes is a voice of reason.

In an age where Christians of every race are being silenced and censored by Big Tech oligarchs, Nick Fuentes is a shining example of where things are going for us all if we dare to simply say “no” and crack a few jokes about the American Regime.

Nick is banned from flying in airplanes, banned from all of Big Tech platforms and payment processors, he had his money seized by the feds, he is defamed by special interest groups and media outlets with billions in assets, and worst of all he is attacked by fake “conservatives” and swiftly judged by fellow “Christians” who conserve absolutely nothing and serve as mere pawns of the Satanic elites.

You have to ask yourself: why is this happening to Nick and what are they so afraid of a 22 year old young man for?

Nick has never advocated for violence. He has millions of fans and followers from around the world from every race and creed. He advocates for putting our country and its people–all of its people, first in our political policy, and for proclaiming his faith in Jesus Christ as King. Nothing more, nothing less.

Nick is a Christian young man who openly proclaims Jesus Christ as King in front of millions of young people. At a time when it seems like the youth have all but abandoned Christ, Christians should be rejoicing that a bright and talented young man is speaking God’s Truth to the wicked and demonic powers of this world–-and bringing souls to Christ in the process.

You may not like his style and he certainly makes mistakes as we all do, but the Holy Spirit sometimes uses people we least expect in ways we least expect to do magnificent things for the Kingdom of God.

Nick is a young guy who is having fun, making jokes, and capturing the attention of millions of his peers in a new cohort of voters and political activists.

More importantly: Nick is building a new generation of young Christians who are undoing 100+ years of false and deceptive theology in American Christianity, blatantly wrong and purely fictional false eschatology, and the fundamental lack of Biblical understanding and Christian leadership in every branch of the faith.

I believe that these two things are what make the Satanic Elites so angry. Nick is a young kid in the prime of his youth having fun, glorifying and bringing young people to Christ, while running intellectual and rhetorical circles around people twice his age and making fools out of trillion dollar multi-national corporations and spineless politicians.

You may not like it, but Nick Fuentes and the millions of young Christian men and women like him are the future. Get used to it. We’re not going anywhere and we grow stronger by the day. America First Christian Nationalism is inevitable.

Nick is single handedly shifting the Overton Window further to the right than any “conservative” thinker in the past 100 years with a live stream show from his childhood bedroom. Only in America is this possible. Only through the power of the Holy Spirit is it happening.

In a just and civil Christian society, we do not judge individuals based on what other much more powerful people say about them. We take the time to listen to what it is they have to say with an open mind and an open heart.

Regardless of what you may have heard from your “trusted sources” of information and news about Nick Fuentes, you need to pause and reflect on what is happening to him, who is doing it, and why.

If you are a Christian, the things that have happened to Nick will most certainly be happening to you very soon.

I know this because they have happened to me. As a Christian technology entrepreneur I’ve faced tremendous challenges from the Enemy over the past five years. I’ve been banned from payment processors, app stores, hosting providers, email services, multiple banks, and even VISA. I’ve been defamed and smeared by media outlets all over the world.

Why? Because I built a website that allows people, including Nick, to speak freely on the internet. Because I openly proclaim that Jesus Christ is King as the public CEO of a social network that is used by tens of millions of people every month.

What is happening to Nick, and what has happened to me, will eventually happen to you. Now is the time to start caring about what is going on here.

The Enemy wants to gaslight us into violence. They want to paint us all as “violent extremists,” “racists” and “anti-semites.” In reality we are just normal Christian people with families who are fed up. This is a peaceful movement and Gab is a peaceful community.

We are builders, reformers, men and women of God. We do not destroy things. We build civilizations. We build roads, bridges, airplanes, space ships, and the internet. We explore the world and the stars. We spread the Gospel to every nation.

God is righteously judging our county, but do not be tempted by The Enemy’s deception and lies, including about Nick Fuentes and Gab. We are going to sit back and watch as the woke American Regime consumes itself. While this happens we are going to peacefully rebuild and we’re going to have fun and glorify God doing it.

We are building new channels of communication. New sources of information. New marketplaces. New economies. New cities. We will rebuild it all, just as we’ve done many times before.

Get out of the cities, get your kids out of woke schools, stop watching controlled opposition media, stop using Big Tech services, stop buying products from brands who hate you, shop local, start a small business, get involved in your local community, and sit tight.

God is in control, and Logos is rising.