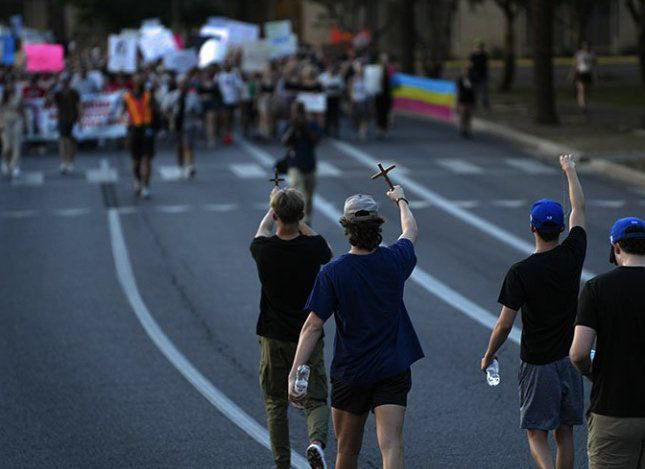 From the heights of the New York Times, a watchman named Tim Gruber has espied out upon the fringes of the liberal-democratic wastes a rowdy band of “Far Right Christians” in a “Quest For Power”. Grubbs intends it as a warning, but this sounds like the beginning of a really rad story. Tim is afraid that the Global American Empire (GAE) is under attack by radical right-wing “christo-fascist” extremists. He’s probably upset that they’re having fun, too.

I was going to write an article about the contradictions in Grubbers’ piece, but I instead thought it more enjoyable to lean into his fears and mock his alarmism, for the fact that the great Tower of The New York Times even notices our mannerbund of ruddy warriors betrays their weakness. Tim calls us conspiracy theorists – a worn phrase that induces yawns. Such has always been the complaint of critics and skeptics.

Yet, Christ’s resurrection was the first Christian “conspiracy theory”, in the eyes of the antiChrist Jews and pagan Romans. It was a lie that Jesus was the Christ. It was domestic terrorism that this God-Man was King. And it was an insidious conspiracy that this King had risen from the dead. But it was all true, and Jesus also ascended into heaven and sat down at his Father’s right hand until all enemies will be made as a footstool under his feet. Enemies, like, say Grubbs here. Jesus now bids all men, and especially rulers and kings to bow and kiss the Son, lest he be angry with them and them perish in the way.

So, do not fear, brothers and sisters, when the world slanders you; for it first did so to your Lord and Savior and his immediate followers long ago. They mean it for evil, but God will use it for good. Very often the thing which brings judgment upon the wicked brings salvation for the righteous. The flood of Noah was salvation to God’s covenant people but judgment on the wicked and their entire world order. The fall of Rome and the rise of Christianity happened simultaneously. Tim Grubbler and the New York Times are just scrawling scribes in a dying empire soon to be replaced by the eternal City Of God. They fear the inevitable collapse of what they call “our American democracy” at the hands of the “Christo-fascists” and “far-right” wackos. The Romans, too, accused the Christians of famine, military defeats, orgies, atheism, and for the fall of their political power. But Augustine of old wrote in his City of God that it was the Romans’ own cosmic wickedness that caused their empire to collapse.

Sure, all unbelievers incur the wrath of God. But, said Augustine, there is a special evil that rejects even natural order, natural law, moral norms known and honored among all mankind which, when forsaken, bring about cosmic curses. The Canaanites filled up the measure of their sins and the land literally “spewed them out”. Nature itself expelled them. The cities of Sodom and Gomorrah likewise were destroyed with fire for their unnatural desires. Spengler wrote about the moral decline preceding the fall of civilizations: decadence, unnatural desires, and finally a gluttonous lust that devours itself. Yes, there are some sins which Nature itself rectifies. Horace said that if you drive out Nature with a pitchfork, she comes right back in – good and hard. St. Paul said that when people reject God they themselves become rejected by the natural order of things.

Don’t worry, friends. The meek shall inherit the earth. The wicked will perish from the land. And what shall we do with it once we come into our inheritance? What, indeed, would we do now if the gospel actually won in our land and in our time, and our nation bowed its knee to Christ? Such thoughts scare liberal journalists, not because we would do anything nasty to them, but because they and their world are small and cannot comprehend the greatness of Christian civilization, much less heavenly life. In C.S. Lewis’ “The Great Divorce”, the people in hell couldn’t withstand even the laughter of the people in heaven. Heavenly joy is too heavy and oppressive for devils. The mere political success or domestic flourishing of Christians looks to the pagans like tyranny, fascism, conspiracism. This is why they want to stamp out families raising children. There’s truth to the meme that a man and wife with children in a home minding their business is, to the left, “right wing extremism.” Our laughter is their nightmare. The mere existence of the godly is “terrorism” to the wicked.

So, the Grubman is more right than he knows or fears: Christianity itself is a grand conspiracy, as C.S. Lewis said, “Christianity is the story of how the rightful King has landed, you might say in disguise, and is calling us all to take part in His great campaign of sabotage.” The enemies of Christ call it “fascism” or whatever but we know it as a holy campaign of sabotage. Christianity is indeed engaged in a quest for power – holy, eternal, and joyful power of the righteous sings over the entire earth. It’s the greatest, most enthralling effort imaginable. Liberals are worried that Christians are plotting to take over the United States. They should be more concerned that Jesus is plotting to take over the United States.

The correct response to the liberal establishment’s wailing and weeping is that we Christians are going to convert their future kids & teach them to overthrow their own parents’ idols and worship the true God in holiness and righteousness and sing songs of the glory and victory of Christ.

Thomas Achord is the headmaster of a Christian Classical academy, the co-host of Ars Politica Podcast, and the co-author of “Who Is My Neighbor”.