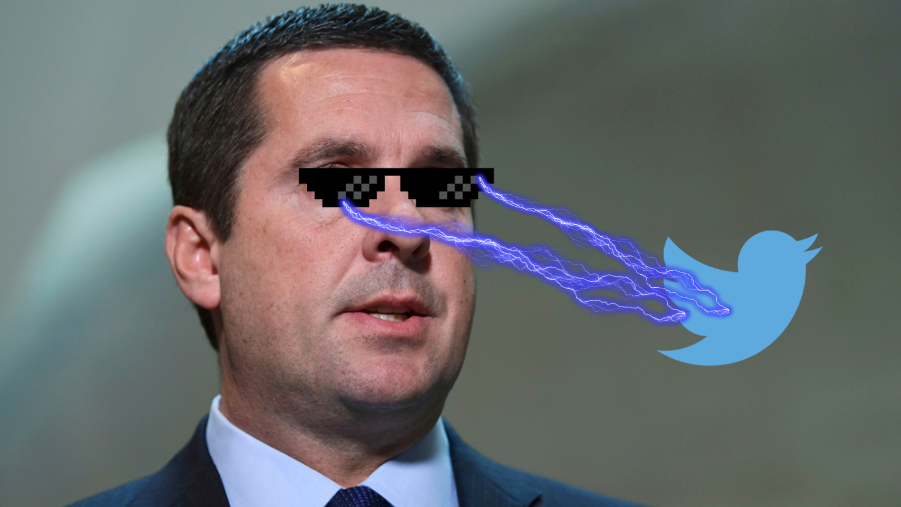 Devin Nunes’ Twitter case is one of three lawsuits in which he argues that activists conspired to damage his reputation in 2018. He also argues that Twitter shadowbanned him, although it’s unclear where these claims stem from. There have been several attempts to sue Twitter by many conservatives over the years. Inevitably they all fall short and only end up making lawyers a bunch of money.

The real solution to Silicon Valley bias is not silly lawsuits that go nowhere and accomplish nothing, but rather to build decentralized and viable alternatives that stand for free speech. Like Gab.

Further, it seems that Nunes’ defamation case is anti-first amendment. I haven’t seen all of the content posted by the clearly labeled parody accounts on Twitter, but what I did see didn’t appear to cross the line into defamation. It seems more like Nunes’ is super mad online that people have parody accounts mocking him, which are certainly protected by the first amendment and by Twitter’s terms of service. All Nunes’ did in the process of suing them was make them dramatically more popular.

All in all this seems like a giant waste of time and a big win for lawyers, who will make some nice bank off this drama.

The Twitter case alleges that the company “shadowbanned” Nunes’ social media posts, meaning he believes the company diminished the reach of his public messages. He also alleges in the case that Twitter allowed Republican political strategist Liz Mair and two parody Twitter accounts authored by anonymous writers to defame him.

The parody accounts, known as Devin Nunes’ Cow and Devin Nunes’ Mom, remain anonymous five months after Nunes sued them, although their influence has swelled. Each previously obscure Twitter account now has legions of followers, and each is urging its followers to to support Nunes’ political adversaries.

Mair, a former Virginia resident, and the writers behind the parody accounts are not expected to attend the hearing. Breitbart, the conservative online news site, has reported that Nunes plans to be in court.In its initial motion to dismiss, Twitter focused on Nunes’ filing in Virginia rather than on his substantive allegations.“All claims against Twitter should be dismissed for lack of personal jurisdiction and improper venue,” lawyers for Twitter wrote.Outside of court filings, Twitter has challenged Nunes’ contention that its platform was biased against him.“Twitter disputes the claims raised by Congressman Nunes,” a Twitter spokesperson said. “We enforce the Twitter Rules impartially for all users, regardless of their background or political affiliation. We are constantly working to improve our systems and will continue to be transparent in our efforts.”

Nunes’ complaint argues the case can be tried in Virginia because extensive activity by Twitter occurs in the state. Twitter counters that it does not have an office there and any argument made for why the case should be heard in Virginia could be applied to any state in the U.S.Lee Berlik, a veteran Virginia defamation attorney, said Twitter likely will succeed in having the case dismissed because courts have generally ruled corporations need to be sued in their “home” states.“Twitter can probably only be sued in Virginia on causes of action that arise out of specific activity conducted in Virginia,” Berlik said. “Nunes’ lawsuit does not appear to me to be based on any such activity, so I would expect the court to allow Twitter out of the case.”If it is dismissed, Nunes would be free to file the complaint somewhere else and restart the process.If he files in California, he’d encounter laws discouraging frivolous lawsuits that would allow Twitter to demand that he prove his lawsuit has merit.

If a California judge finds the case to be frivolous, Nunes could be responsible for Twitter’s legal fees.“That difference in state law seems to be the only reason Nunes brought his case in Virginia,” Berlik said. “If the court finds that Nunes intentionally filed his case in an inconvenient forum solely to evade an unfavorable California law, the court will likely find good cause for dismissal.”There’s a possibility the court will transfer the case to a venue it feels is more appropriate rather than outright dismissal, according to Albro, but that’s unlikely.“Usually a judge will essentially say, ‘You have no business in my court, go figure it out,’” Albro said.

If the court allows Nunes’ case to move forward, the congressman will be able to request information from Twitter and the other defendants through the discovery process.Twitter requested a protective order so it did not have to respond to discovery requests until after the hearing and it has not complied with discovery requests in the meantime. Nunes’ lawyer, Steven Biss, disputed that request.

Nunes’ discovery requests appear to be focused on proving Twitter does extensive business in Virginia, on identifying Mair’s clients and on identifying the authors of the parody Twitter accounts.Biss, Nunes and the other defendants either did not respond or declined requests for comment.In a separate case, Nunes in Virginia is suing Sacramento-based McClatchy alleging that The Fresno Bee defamed him in a news article focused on his partnership in a winery that was the subject of an employee’s lawsuit. McClatchy intends to fight the case and has called the lawsuit a “baseless attack on local journalism and a free press.”