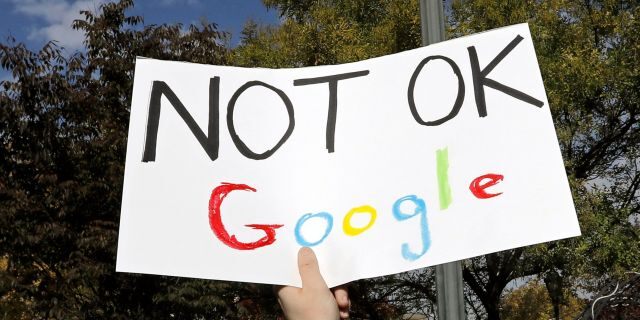 Google Tells Employees To Cool It With Political Speech At Work

Google is trying to put an internal fire out at their baby sitting facilities in Silicon Valley. It turns out that a company run by whining mobs of children isn’t the best approach to keep employee morale high. Of course when your employees spend all day long crying to one another other about the bad orange man, It’s hard to imagine that much is getting done.

There’s some irony in Google executives telling their employees to shut up at work about politics. They are doing the same thing to millions of people around the world so why wouldn’t their employees expect it to happen to them too?

Google is cracking down on political speech among its workforce amid a widespread backlash from lawmakers, activist groups and its own employees over a host of issues.The Mountain View, Calif. company, is well known for having fostered a very open environment in which its army of workers is encouraged to communicate, disagree and share views on thousands of internal messaging boards and groups.

Google, however, is putting new restrictions on political expression and discussion of the company’s activity. Google CEO Sundar Pichai explained the tech giant’s new guidelines, which now discourage workers from discussing politics on internal communication forums, in an email to employees Thursday night.

“While sharing information and ideas with colleagues helps build community, disrupting the workday to have a raging debate over politics or the latest news story does not,” the guidelines state, as reported by Recode. They warn employees that their primary responsibility is to “do the work” that they’ve been hired to do — “not to spend working time on debates about non-work topics.”

Over the last few years, the company has faced waves of internal dissent over projects with the U.S. government and military, as well as accusations of political bias against conservatives from President Trump and other Republicans.At an all-hands Friday meeting not long after Trump’s victory in 2016, co-founder Sergey Brin said he found the results “deeply offensive” and lamented that it was “probably not the most joyous TGIF we have had.”

Video of that meeting was leaked two years later, which fueled claims on the right that Google is biased against conservatives. The company has consistently denied any political bias, stating that its ubiquitous search engine can’t be tampered with based on ideology.

According to Recode, the new policies will prevent employees from making statements that “insult, demean, or humiliate” co-workers, business partners or others, including public figures. Google said those public figures include elected officials like Trump.In addition, employees will not be allowed to engage in debates that encourage or organize fellow colleagues to vote for or against a specific candidate.

The company is also reportedly creating a central flagging tool where employees will be able to report one another’s comments as inappropriate — and those in violation could face disciplinary action.

The rules also will prohibit employees from sharing “need-to-know” information or making “false or misleading statements” about Google’s products or business. Over the last few years, at least two projects that prompted a backlash, Project Maven and Project Dragonfly, became publicly known only because of employees who leaked the information to reporters.Even so, a spokesperson told Recode that the company would first try to educate the employee before disciplining them.Google did not respond to a Fox News request for comment on this story.

Source: Google cracks down on political speech among its workforce | Fox News