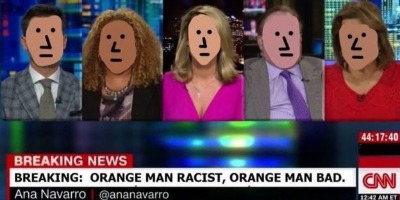 A new study is confirming what anyone with half a brain already knew: liberal media bias exists and it has for a long time. It should come as no surprise to anyone who has turned on a television in the past forty years that a strong and obvious liberal media bias exists. Apparently according to this new study mainstream news outlets tend to uphold “liberal values,” whatever that means.

With the decline in television and thus the decline in the mainstream media’s ability to control and influence narratives, the rise of the internet and social networking has become a direct and positive challenge to this clear and obvious bias.

Which of course is why the media is lobbying Big Tech to censor conservative viewpoints more and smearing conservatives as every “ism” in the book. Rest assured, their days of power and influence are numbered. The echo chamber of mainstream media news coverage is coming to an end.

In 2019, Media Research Center analyzed 540 hours of news coverage on CNN and MSNBC over three randomly-selected weeks. The two networks conducted nearly the same number of interviews with members of Congress.

In total, they interviewed 284 Democratic members of congress compared to just 40 Republican. MSNBC leaned even more to the left, as they interviewed 148 Democrats and only 11 republicans.Both networks gave opposing questions to the Republicans but gave friendly questions to the Democrats. Meaning, they focused on Democratic talking points and agendas.

It’s common practice to ask a political interviewee to give an answer to the argument of the opposite side, but consistently asking Republicans to answer to Democratic talking points, while hardly ever asking Democrats to do the same thing, speaks to the fact that the networks are actually choosing sides.

A 1981 survey that found that 80 percent of journalists in the mainstream media identified as liberals.S. Robert Lichter, then with George Washington University, and Stanley Rothman of Smith College, released a survey of 240 journalists at top media outlets, including the New York Times, Washington Post, Wall Street Journal, Time, Newsweek, U.S. News & World Report, ABC, CBS, NBC, and PBS.The journalist were surveyed on their political attitudes and voting patterns.

They found that the vast majority of journalists surveyed voted Democrat and agreed with liberal values.Eric Merkley, a contributor to the American Politics and Policy website who specializes in public opinion and political communication, recently studied 400,000 news stories on economics published over three decades and found that the mainstream portrayed liberal politicians in a better light than their conservative colleagues.

The news stories were on unemployment and inflation between 1985 and 2013 from the Associated Press and a variety of mainstream newspapers, including the New York Times, USA Today, and those with histories of backing the Republican Party, such as the Dallas Morning News and the San Diego Union-Tribune.He found that the tenor on economic news is more favorable during Democratic presidencies compared to Republican.

He also found that only Republican administrations are treated with more negative coverage in response to short-term increases in unemployment or the inflation rate.To illustrate a step further, there is a Harvard Study by Thomas E. Patterson, Bradlee Professor of Government and the Press, which highlights how media bias was at an all-time high during the first 100 days of Trump’s presidency.According to the 2017 study, most mainstream media including, CNN, NBC, ABC, Washington Post, New York Times, BBC covered President Trump negatively over 80 percent of the time and only Fox News came close to giving him overall positive coverage.

“Studies of earlier presidents found nothing comparable to the level of unfavorable coverage afforded Trump,” the study said.With the mainstream media networks being predominately liberal, it’s not surprising that when it comes to news about politics and government, liberals and conservatives trust very different sources.

According to a 2014 Pew Research Center study, about half of “consistent conservatives (47 percent) name [Fox News] as their main source for government and political news, as do almost a third (31 percent) of those with mostly conservative views.” These conservatives also “express[ed] greater distrust than trust of 24 of the 36 news sources measured in the survey.”

The “consistent liberals” on the other hand are “more than twice as likely as web-using adults overall to name NPR (13 percent vs. 5 percent), MSNBC (12 percent vs. 4 percent) and the New York Times (10 percent vs. 3 percent) as their top source for political news.” These folks “express[ed] more trust than distrust of 28 of the 36 news outlets in the survey.”