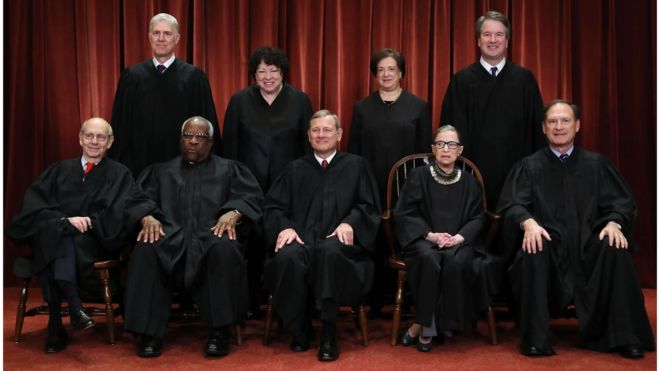 Facebook details its “supreme court” that will handle controversial posts, here is Gab’s

Facebook announced this week that they would be creating a new group, which some are calling their Supreme Court, that can overturn Facebook’s own company content moderation decisions. This is a scapegoat for Facebook. It creates a facade of accountability, but in reality it’s all smoke and mirrors to justify their censorship and social engineering of billions of people.

Big Tech companies are seeking to rewrite the rules of freedom. To draft their own judicial branches and disregard the American judicial branch and freedoms in the country that made their companies so successful in the first place. This is unacceptable. It’s only happening because we allow it to. We lie to ourselves and say there are no other alternatives. There are always alternatives. There are always choices. The answer is to build. Build in a way that defends and protects the free and open internet for all people.

We cannot allow these Silicon Valley oligarchs to create their own judicial system to decide who is allowed to speak on the internet. They are already more powerful than many governments. They are even attempting to create their own money with Facebook’s Libra. We are rapidly approaching a hellish dystopia ruled by a bunch of effeminate beta males in San Francisco.

So in light of Facebook’s news announcing their “Supreme Court,” Gab wanted to take the time to introduce our Supreme Court. We have always used the rulings from the Supreme Court of the United States of America to guide our moderation decisions. The First Amendment, and rulings on it, have led to the creation of the greatest country on the planet. So we think this Supreme Court is the best the world has to offer in terms of guidance on online content moderation.

Facebook on Tuesday released its plans for the new board previously likened to a “Supreme Court” that can overturn the company’s own content moderation decisions.

The new “Oversight Board” will govern appeals from Facebook users and questions from the company itself. The board will eventually consist of 40 members with three-year terms drawn from a diverse array of backgrounds, according to Facebook. Panels of five members will deliberate on cases it chooses to take. A minimum of 11 members will be required for the board to function. Facebook said in a press release it plans to have the board in place and making decisions in early 2020.

Facebook CEO Mark Zuckerberg first wrote about his conception of a new body to govern the company in November of 2018 as Facebook faced mounting scrutiny over its privacy and content moderation practices. Conservative lawmakers have accused Facebook and other tech platforms of displaying ideological bias in its content removal practices. In December, The New York Times reported that Facebook’s content moderators relied on inaccurate and outdated guidelines to approve and reject flagged posts.

To create a level of independence from the company, Facebook said it will establish a trust to compensate board members. The board will be able to hire staff to support its functions, Facebook executives said on a call with reporters, but in the interim, the company has weighed the possibility of lending its own staff to get the team up and running. The board’s decisions will be binding except in cases when Facebook determines that implementing the finding would break the law.

The member selection and governing rules incorporate feedback from Facebook’s public consultation period on its draft charter. The new body will be empowered to pass binding decisions on content moderation. The board will prioritize cases that are deemed significant based on the severity of the content, scale of distribution and public discourse that it prompted. Priority will also go to cases based on the difficulty of the questions the content raises, Facebook said. A case will be deemed difficult if Facebook’s decision has sparked disagreement or the decision involves tension between different and important values, according to the company.

After a selection process that will include gathering candidates from a diverse set of backgrounds and vetting them for potential conflicts of interest, Facebook said it will extend offers to a “limited number” of candidates to become co-chairs, formally appointed by the trustees. Once the co-chairs are in place, they will help select the rest of the board members. Later, the board will lead the membership selection process itself, Facebook said.