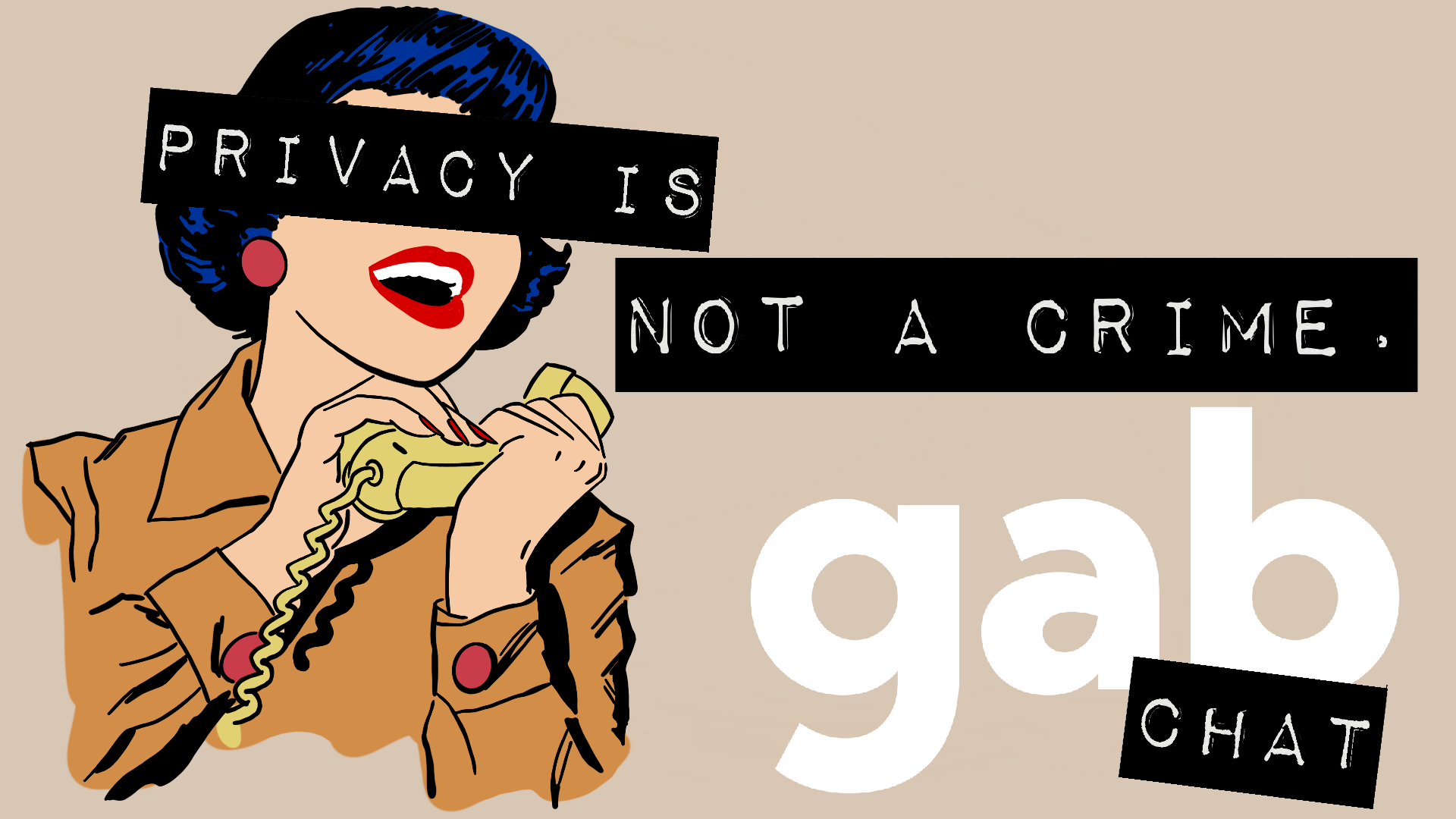 Today Gab is pleased to announce the release of the beta version of our encrypted messaging service: Gab Chat.

Gab Chat is comprised of both public interest-based chatrooms and private encrypted chatrooms. Encrypted rooms cannot be read by anyone outside of the members in the chatroom, not even Gab.

Gab Chat is also not dependent on any App Stores and therefore does not need to censor on behalf of Apple and Google like Telegram does for example.

Gab Chat is free to use and puts privacy and free speech first above all else.

You can sign up and login to Gab Chat here.

We are cognizant we do so amid a ferocious debate in Washington and across the country about the use of end-to-end encryption in communications.

Gab’s mission is to empower everyone to speak freely. We do this by developing open source code which anyone in the world can use – free of charge – to develop and host their own social networks, their own encrypted chat servers, and more, free from woke left-wing Silicon Valley morality policing. Once our code is open source, as many cryptosystems are, anyone, anywhere will be able to use that code, with or without our permission.

They will also be able to use our services, provided that they follow our rules. Put simply, we essentially ask our users to follow one simple rule: don’t use our platform to exceed the boundaries of the First Amendment.

We cannot control what people do on their servers with our code. On our own servers, all legal political speech is permitted. We operate a strict policy that no obscene pornography or criminal activity of any kind is permitted. Violations are aggressively policed by ourselves and our users. We cooperate promptly and fully with US and international law enforcement to the extent we are able to ensure our platform is not used for the commission of serious crime.

Attorney General Bill Barr is an opponent of strong cryptography such as that used by Gab Chat. He wants tech companies to backdoor, or compromise, our services so law enforcement can access the content of encrypted communications data. The issue, of course, is that the only encryption worth placing on private communications is that which tech companies themselves cannot break, as we do.

We do this to protect their users from third party attackers, including ourselves, but also including cybercriminals and hostile foreign actors like the Russian or Chinese governments.

Encryption creates a digital version of a private space for conversation that humans have had for millennia, much as a walk through the park would have been one hundred years ago, or a shredded letter or unrecorded phone call would have been fifty years ago.

Privacy is an important aspect of free speech and one that is protected by the First, Fourth, Fifth and Fourteenth Amendments to the US Constitution. We consider it part of our mission to expand privacy rights around the world.

As drafted, the Barr-backed proposal – known as the EARN IT Act – would destroy privacy online by making Section 230 conditional on adhering to the governance recommendations of a federal commission. This would force tech companies to make a very uncomfortable, nearly impossible, choice: either compromise the security of all our users by denying them the encryption they need to stay safe online, or get crushed into oblivion by vexatious lawsuits filed by every person who doesn’t like something someone else said online using our platforms.

Apart from being an unconstitutional infringement of the First Amendment rights of tech companies and their users, this proposed law will destroy the US tech industry, or drive it offshore, if passed. The bill should therefore be scrapped, and Americans’ rights should be respected.

As the EARN IT Act is specifically designed to address corporate policies regarding child exploitation online, we have received several press inquiries asking about our view of the use of online platforms by minors.

From our point of view, we comply fully with our requirements under the Communications Decency Act and the mandatory reporting provisions of 18 U.S. Code § 2258A.

As a matter of policy Gab aggressively polices illegal conduct. Gab also does not, per our terms of service, permit use of our platform by minors, nor do we market our platform to them, unlike Snapchat, Tiktok, Facebook, Instagram, and more. As a result, we see very low levels of criminal behavior on the platform, and what behavior we do detect results in immediate and permanent account bans.

Other companies have put their growth ahead of safety. Based on open source reports, companies like Facebook appear to be where the bulk of online child predators congregate, seeing as of the 18.4 million reports of child sexual abuse worldwide in 2018, a reported 12 million traced back to Facebook Messenger.

Facebook Messenger is not encrypted by default; neither is Snapchat, Twitter DMs, etc.  Widespread, unsupervised access to the internet, and the immoral distribution of obscene pornography to young people by internet smut peddlers, is the larger issue.

Encryption is not the problem here. Forcing technology providers to throw out the Constitution and render the entirety of the U.S. population vulnerable to Chinese and Russian cybercriminals and spies is accordingly not the solution.