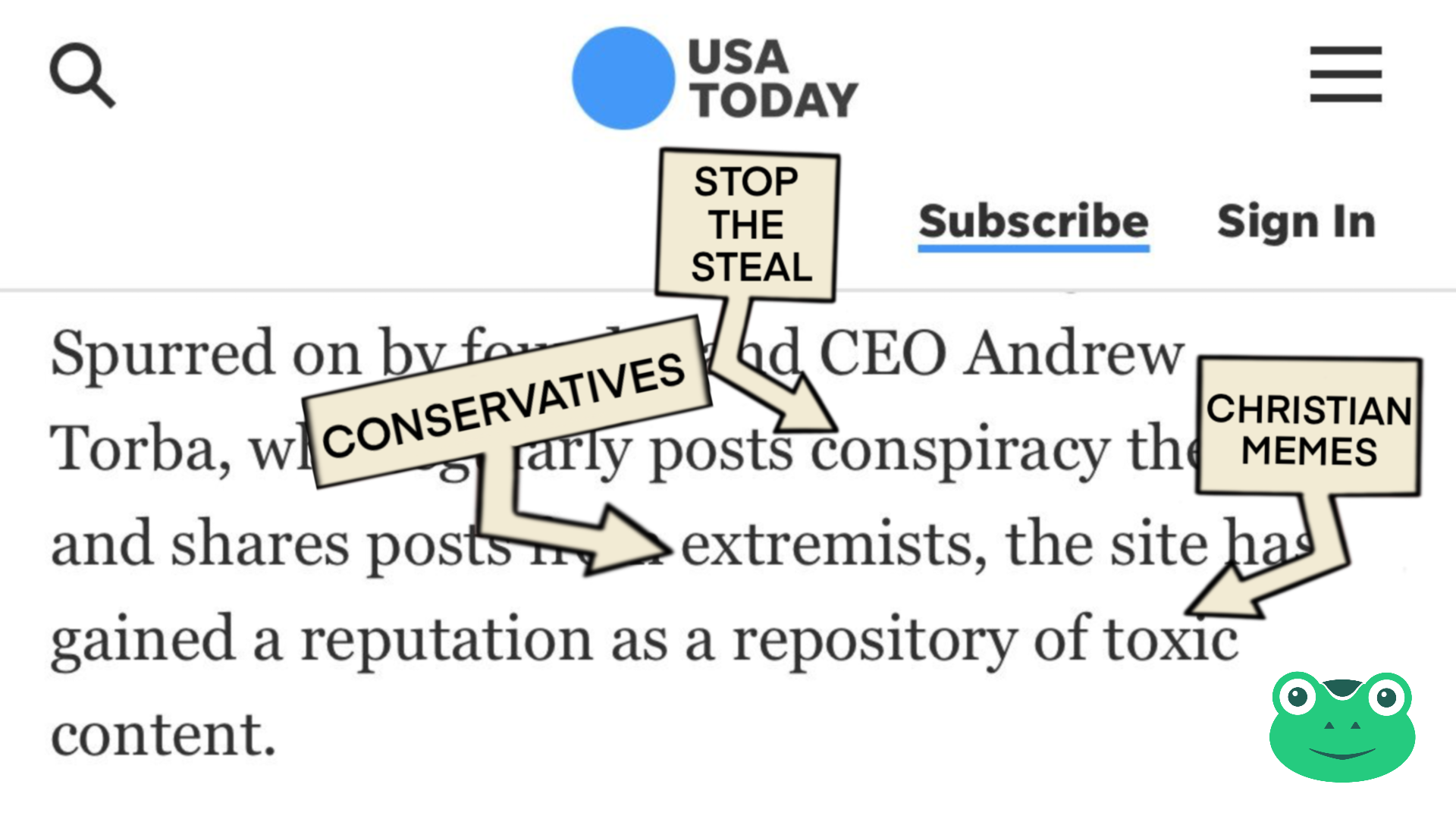 Yesterday the New York Times reached out to me for a comment on Gab’s recent growth. I’ve never had any luck with getting the New York Times to describe Gab accurately or fairly over the years, so I opted to use my new standard reply for all dishonest and corrupt media publications: “Jesus is King, speak freely on Gab.com.”

If they are going to print something with my name attached to it, at a minimum it will be glorifying to Christ and promoting Gab at the same time so that readers can visit the site for themselves and make their own judgements.

Predictably the New York Times referred to Gab as a “haven for racist memes and content,” but to my surprise they did indeed print my comment of “Jesus is King, speak freely on Gab.com” and even linked to my recent blog post about Gab’s explosive growth. USA Today also called Gab a “repository of toxic content” this week, which added more fuel to our fire and provided free advertising to promote our growing community.

These descriptions and false framing of the Gab community could not be further from the truth. At the time of publication, the post below was one of the top trending posts on the website the New York Times calls a “haven for racist memes and content.” (As if Twitter and Facebook don’t match that description?)

If Mike Isaac, the journalist from the New York Times who wrote the piece, had actually visited the site before writing hyperbolic nonsense he would have seen this post trending on the front page of Gab and the hundreds of kind, welcoming comments from our community.

The mainstream media tells the world that Gab is home to “racists and extremists.” Wikipedia repeats this lie. Many mainstream conservative “celebrities” repeat this lie behind the scenes. None of these things matter though, because when people actually visit Gab for themselves they meet Christian patriots like Sharona who are welcomed with open arms by our community.

Journalists lose credibility when they write things like this because when reasonable readers come to Gab they quickly realize that the mainstream media narrative frame about us is merely a figment of the corrupt journalist’s imagination.

It’s really a shame because Mike Isaac is a wonderful writer (I have his book) and I believe he genuinely tries to do a decent job of being more objective than most.  Perhaps he doesn’t care about his credibility in front of the 73 million deplorable plebs like us in this country, but I hope he does try to be better for the sake of his integrity and writing.

There’s something really special happening in media right now and I don’t know if people like Mike Isaac can see it clearly through the dense fog of their media elite echo chamber.

The People yearn for the free flow of information, for authenticity, and for truth.

We The People will no longer submit to any “authority” when it comes to information and news: be it from celebrities, media personalities, Big Tech companies, or corporate media journalists. A radical transition akin to the industrial revolution but for media is underway. This revolution in media is not just against mainstream and traditional media outlets that lean left, but rather against the entire corrupt system of liars and dishonest frauds as a whole.

We are only now witnessing the start of this revolution unfold with the recent backlash against Fox News by their core audience and the exodus from Big Tech platforms to alt tech platforms in wake of mass censorship and election interference from Silicon Valley.

The rubicon has been crossed, and there’s no turning back.

“Slowly, but surely then suddenly and all at once.”

The era of centralized control over the flow of information online is finished. We The People are the news now. They can call us “extremists,” “racists” and “conspiracy theorists” all they want, but that’s only causing our movement to grow stronger. If you want to know who is radicalizing and dividing people: look around the offices of the New York Times.

Gab is the dawn of a new era in media. An era where information is not dictated to the masses by a handful of elites, but rather crowdsourced, curated, fact-checked and distributed by millions of people to millions of other people in real time.

After Trump was elected Silicon Valley, politicians, and media elites realized the magnitude of this shift which is why they are trying desperately to put the genie back in the bottle and stop new media platforms like Gab from rising. This tactic won’t work, it hasn’t worked for the four years they been using it against us, and it will only continue pushing millions of people to places like Gab where information flows freely.

Buckle up, The People’s Media Revolution and Digital Civil War have only just begun.