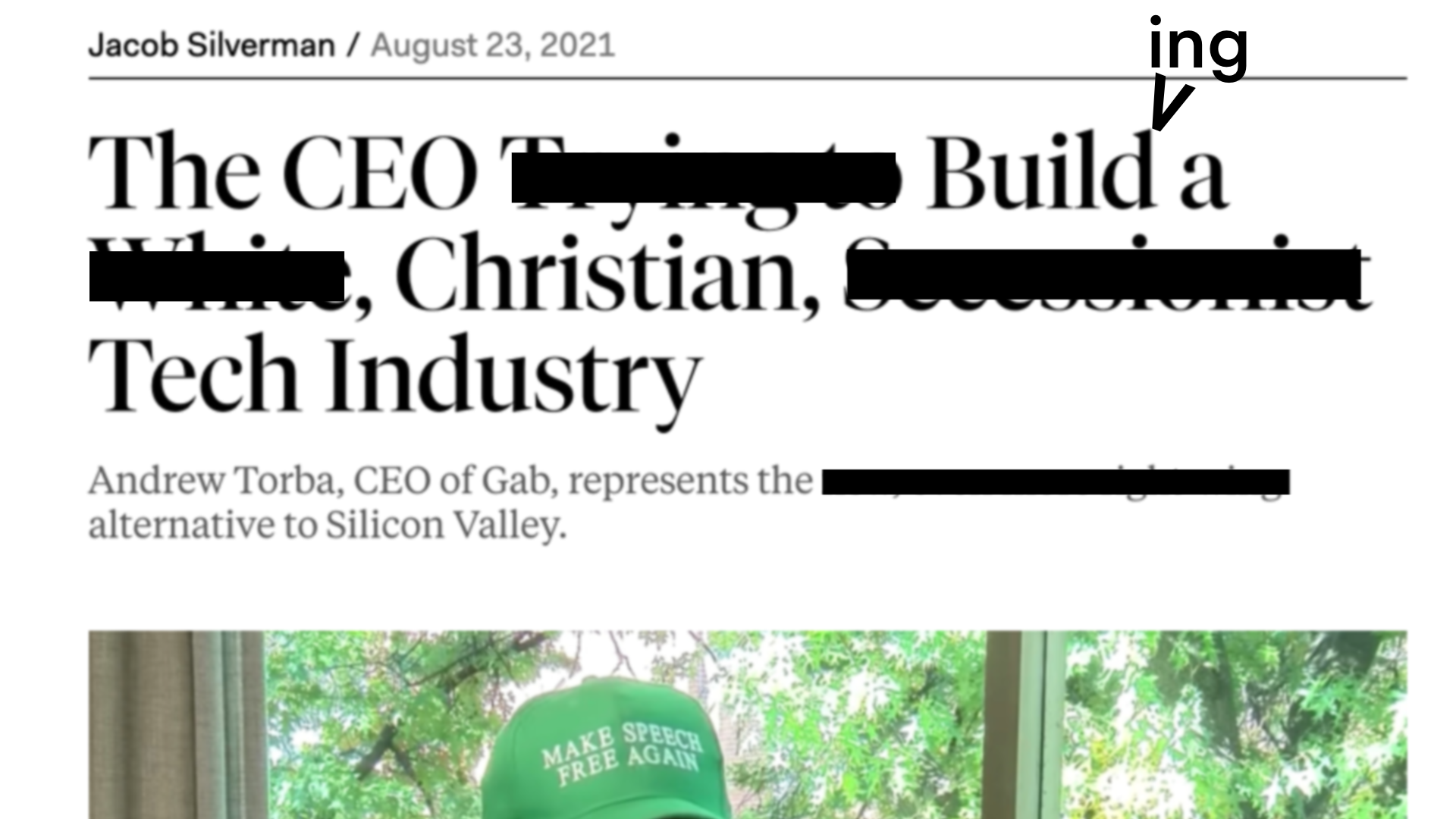 I woke up to yet another hit piece about both Gab and myself this morning. You know you are over target when you’re taking flak on a weekly basis. The funny thing is the “hit piece” actually made Gab look pretty great.

The journo who wrote it admitted that Gab is positioned for success, admitted that Gab doesn’t answer to the powers that be, and admitted that I am personally authentic with my belief in Jesus Christ, free speech, and defending Christian values. It’s nice when even your enemies can’t help but to admit that you are authentic and poised for success if nothing else. You can watch my full response and breakdown of this latest attack on our community below.

This hit piece follows the recent defamatory attacks from the New York Times and the Washington Post after I dared to remind people that they have religious liberty and bodily autonomy in this country. Sharing vaccine religious exemption forms, which can be found here, is apparently “disinformation” according to the powers that be. Many people have reached out to let me know that the exemption forms worked at their school or place of employment, praise God for that! Maybe they will work for you too.

So I’m going to keep sharing them and I encourage you to do so as well, especially now that employers seem likely to force vaccine mandates after the rushed FDA “approval.” Note that 100 million people who are already skeptical of every branch of government aren’t likely to be compelled by the approval of another three letter government agency which has so often in the past approved dangerous drugs that were later recalled.

FDA approval means nothing to me. I don’t look to our failing secular and wicked institutions for validation, I have God for that.

Remember when the FDA approved Quaaludes, which are now considered a Schedule 1 drug like heroin?

The FDA also approved DES, a “synthetic form of estrogen, was marketed to the expecting mother who preferred to have a healthy baby. It claimed to prevent spontaneous abortion, miscarriage, and premature labor. Studies soon showed that mothers who took DES during the first five months of pregnancy were more likely to suffer from complications with their reproductive systems. The FDA finally banned it in 1971.”

The FDA approved Vioxx, “an anti-inflammatory medication intended to treat arthritis, was the subject of one of the largest recalls in history. After it was approved in 1999, it was prescribed to over 20 million people and was one of the most widely prescribed drugs of 2003. The following year, it was recalled. One of the FDA’s own scientists, Dr. David Graham, estimated that Vioxx had been associated with more than 27,000 heart attacks or deaths linked to cardiac problems.”

There are many more examples that you can research yourself. The bottom line is that this is predicatably being used as an excuse for the government and employers to force experimential vaccinations on people. Meanwhile Israel, one of the most fully vaccinated countries in the world, is struggling with a surge of the Delta variant of Covid.

The best part about all of these attacks is that Gab is so big now that this post you are reading will get more views than all of these hit pieces on us combined. That’s really what they are mad about: our distribution is now larger than some of the top “news” outlets in the world and there’s nothing they can do to stop me from hitting the publish button on this blog.

I’m getting private messages from hundreds of people on Gab who are afraid of what these vaccine mandates will mean for their families and personal health. I don’t have all the answers, but I do have faith that God is using this time of trial to draw us closer to Him. Please know that I am praying for each and every one of you and am doing my best to share your stories and make sure that Gab is the one place on the internet where you can get access to information that is banned everywhere else.