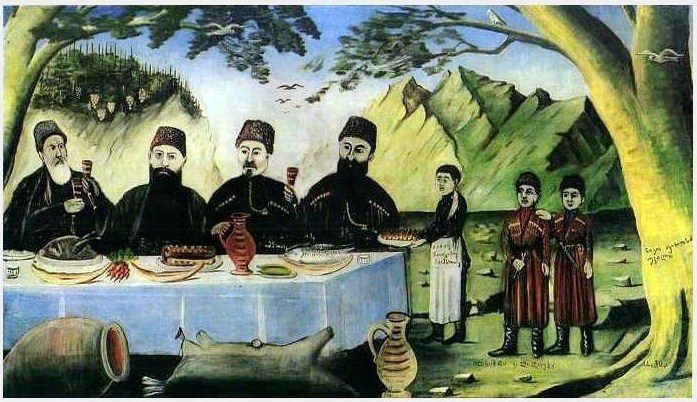 The Supra is essentially a banquet feast in which the tamada, the toast master, leads the table through various themes by speaking words in the form of poetic toasts. The nature of the toasts, the food, and the embedded rituals of the Supra deeply reflect the ethos of Orthodox Christianity, the religion adopted by the nation in the 4th century. It is said that the Supra emerged from the ancient Agape feast, the early church tradition commemorating the Last Supper shared by Christ and his disciples.2 The Supra did not supplant the fundamental Christian ritual of the Divine Liturgy but should rather be understood as an overflowing of sacred liturgical life into the world. Therefore it is no coincidence that the traditional cosmic symbolism of Genesis permeates the Supra, and hence Georgian culture, even today. Like many traditional rituals, the Supra is a way for participants to be united in community, cultivate awareness of cosmic forces, partake in the beauty and wonder of the universe and recognize when created things fall out of line with their ultimate spiritual ends.

This essay will explore the cosmic symbolism of the Supra, using Matthieu Pageau’s commentary on the traditional cosmology of Genesis, The Language of Creation as a guide.