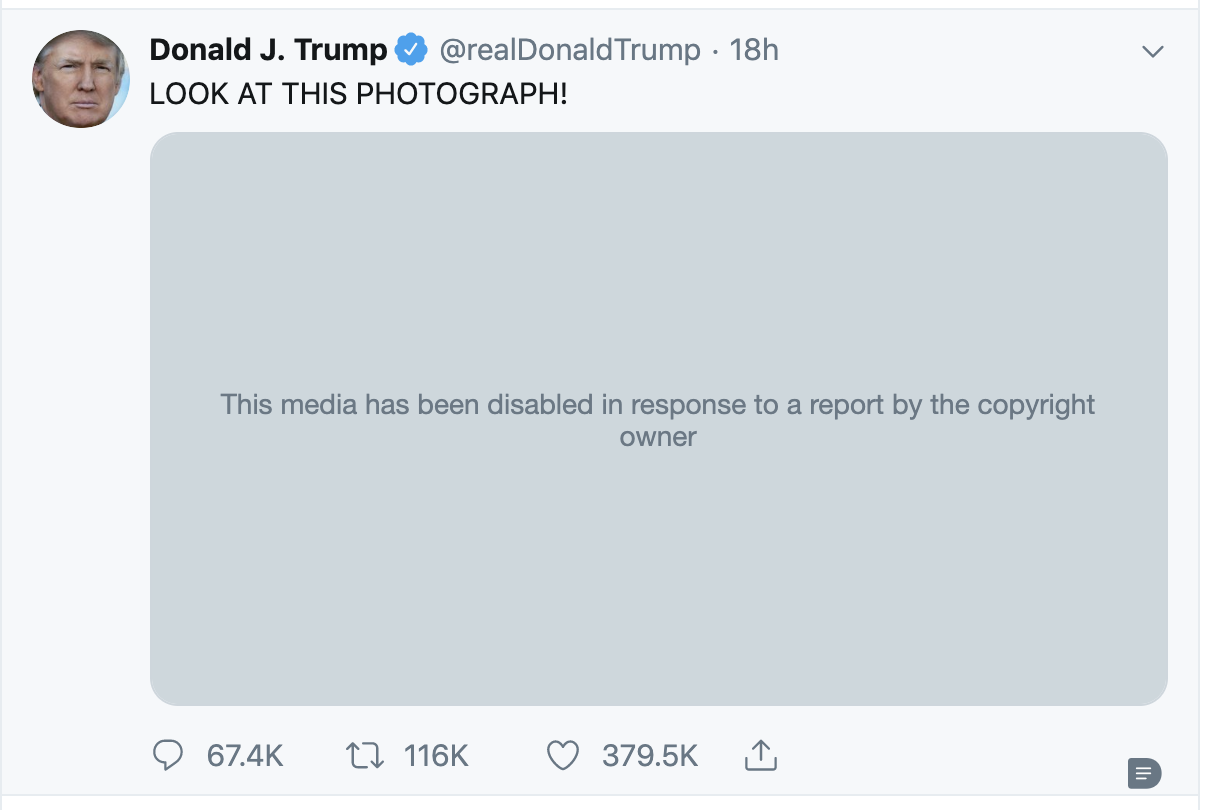 Yesterday, President Trump posted a video of (the absolutely awful band) Nickelback’s song “Photograph,” replacing a picture of one of the band members in their youth with a picture of Democrat presidential candidate Joe Biden, his son Hunter Biden, and a Ukrainian oil and gas executive.

In all probability the video was removed pursuant to the provisions of the Digital Millennium Copyright Act (DMCA), 17 U.S. Code § 512, which says that online service providers such as Twitter (or Gab) are not liable for copyright infringement on our platforms if we respond promptly to takedown notices sent by copyright holders.

In other words, here, Nickelback gave notice to Twitter that Nickelback believed President Trump was infringing their copyright with the Trump version of “photograph,” Nickelback sent Twitter a so-called “DMCA Takedown Request,” and Twitter responded by taking the video down.
This is a move which is designed to limit Twitter’s liability but does so at the expense of President Trump’s speech. But Twitter had the ability to push back against this frivolous request, and did not do so.

A DMCA takedown request, to be valid, must include certain specified information. This includes identification of the copyrighted work alleged to be infringed, identification of material claimed to be infringing, information sufficient for the service provider (i.e. Gab or Twitter) to contact the complaining party, and a statement, under penalty of perjury, that the complaining party is authorized to act on behalf of the owner of an exclusive right that is allegedly infringed.
Sending in a false DMCA request exposes the sender to potential criminal penalties for perjury and civil damages incurred by the online platform provider, including attorney’s fees.

The issue with an account like the President’s is that it is very unlikely that any use of the account to disseminate political or satirical messages will constitute copyright infringement in the United States. In the U.S., we have a doctrine known as “fair use” whereby copyrighted material which is adapted “for a limited and “transformative” purpose, such as to comment upon, criticize, or parody a copyrighted work” will not constitute copyright infringement and, as a result, “[s]uch uses can be done without permission from the copyright owner.”

There are a number of factors which go into a fair use determination, including, e.g., the purpose and character of the use “including whether such use is of a commercial nature or is for non-profit educational purposes,” the nature of the copyrighted work, the amount and substantiality of the copying, and the eventual effect on the work’s value.

Without going into too much detail on the IP analysis, it strikes us that a parody tweet sent by the President of the United States utilizing (and arguably making fun of) a short, ten-second segment of a goofy song by an awkward Canadian pop rock band is likely to constitute fair use in the United States.

Keeping in mind that the DMCA Notice regime is a safe harbor to shield companies from liability, rather than a mandatory regime which must always be complied with, companies like Gab and Twitter have to to take a view with regard to DMCA complaints we receive to determine whether a use is or is not fair.

Companies can push back on DMCA abuse. Gab does so by immediately contacting our lawyers when we receive a takedown requests that strikes us as unreasonable.

In the case of “Photograph,” however, it strikes us that the President’s use of that content, in this context, is almost certainly fair. Twitter has the financial resources to fight a copyright action with a music label if it wanted to, and the legal resources to scare off a frivolous DMCA Takedown request directed at the President of the United States.

Put differently, in our view, Twitter had a choice whether to allow what was, from the perspective of the Democrats, a highly damaging piece of political rhetoric to stay on its site, or be removed. Faced with that choice, Twitter chose to disable access to the content rather than to stand up for their users (keeping in mind that Donald Trump is a Twitter user). Twitter will hide behind copyright law to justify their actions, but if they’d had even the slightest bit of backbone they could have, and should have, put up a fight.

Twitter doesn’t, of course, have a backbone, seeing as they once took down the EFF’s tweet *about* a DMCA Takedown by way of *another* DMCA Takedown.

Censorship of ideas comes in different forms all around the world. In the United States, censorship tends to be aimed at conservatives and libertarians fighting for people’s rights against the establishment. When Gab is as big as Twitter is, and hopefully when the President of the United States is on our platform, we promise to maintain a list of politically exposed persons and entities in relation to which we will have a lower tolerance threshold for abusive DMCA requests.

There is more than one way to silence political leaders and political messages with which a company disagrees. Acquiescing to bogus DMCA requests directed against the President of the United States of all people, as Twitter has, is censorship just as much as if the moderators had deleted the tweet themselves on their own initiative.