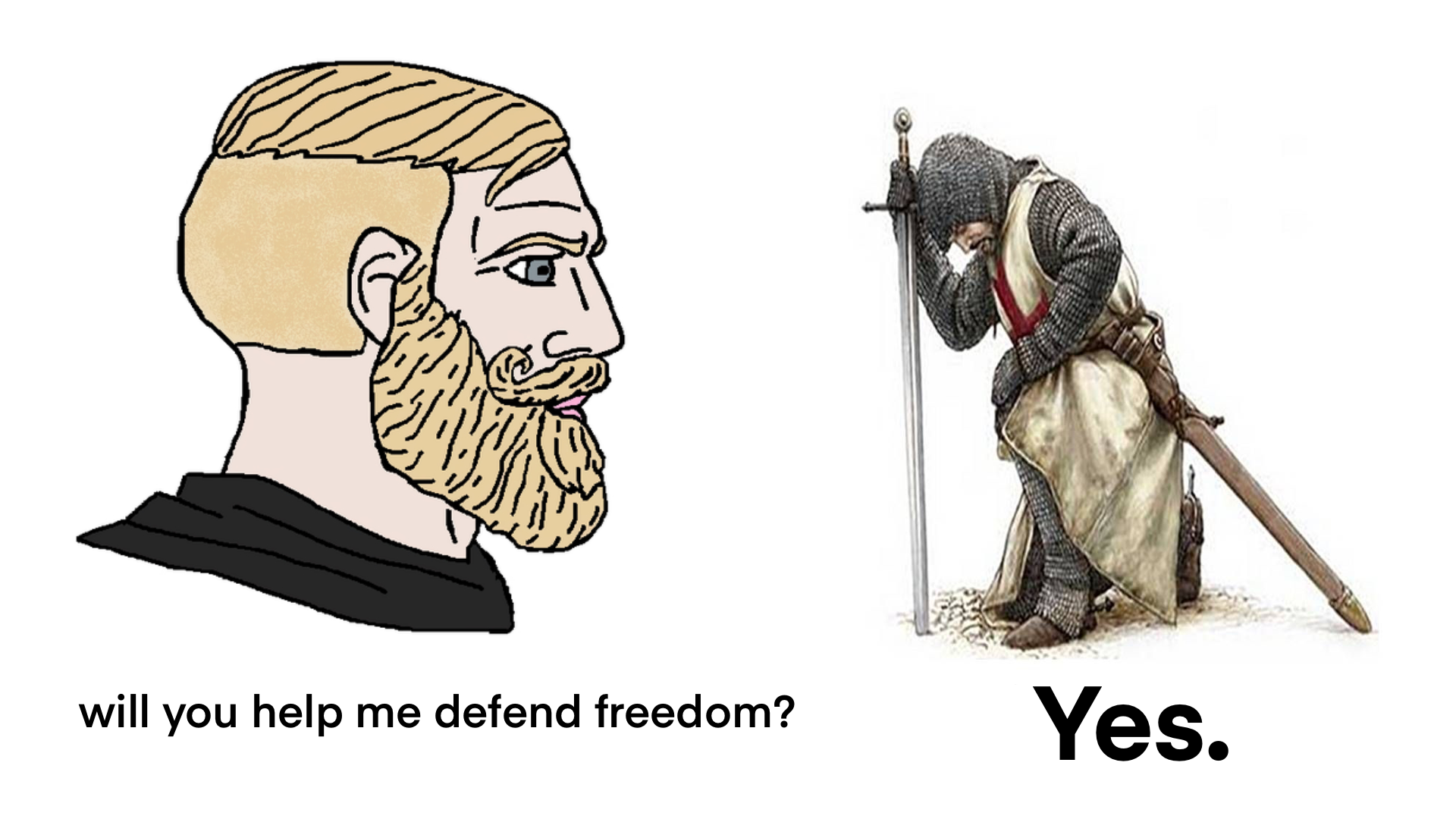 The Christian Crusade To Save Free Speech, Again

“Freedom cannot be exported to a nation that has no marketplace ​for ​the Gospel.​“ -David Chilton

Freedom is rooted in the Christian worldview. There’s no denying this fact. As Christians our faith in Christ frees us from the chains of slavery to sin in a wicked, corrupt, and fallen world.

History shows us that Christians are the forefathers and defenders of all types of liberty including but not limited to freedom of speech, religious freedom, private property, and the creation of freest nation in the history of the world: the United States of America.

Bible-believing Christians have always been defenders of the right to say “no.” We have a sacred duty as Christians to dissent against all forms of evil, wickedness, and terror be it from kings, demagogues, tyrants, or even from within the church itself.

Now the Lord is that Spirit: and where the Spirit of the Lord is, there is liberty. 2 Corinthians 3:17

The word dissenter, from the Latin dissentire, “to disagree,” originates from the Protestants who separated from the Anglican church of England. More generally speaking it is “one who disagrees in matters of opinion and belief.”

Dissent requires freedom of speech to exist. Without it, tyrants quickly work to make any form of dissent illegal. We see this at work even today with the Communist Chinese Party, which treats Christian dissenters with contempt and disdain. Unfortunately we also see it in the United States of America, a Christian nation that has been subverted by a handful of secular ruling class elites that demonize Christians at every turn.

“When the Puritans left England, they did not wander over the earth; God brought them into a land and made them rulers, and though the foundation they built has greatly eroded, it is still very much with us after 300 years. What will people 300 years from now say​ of ​the accomplishments ​of today’s shallow, retreatist evangelicalism?” -David Chilton

From Martin Luther, to the Puritans, to the Founding Fathers: Bible-believing Christians have and always will be the holiest crusaders and defenders of freedom.

The spiritual battle of today is no different than the one Martin Luther or the Founding Fathers faced in their time.

Luther stared in the face of the church at arguably its peak of power in world history and dared to say: “no.”

The Founding Fathers stared in the face of England and its King at arguably their peak of power in world history and dared to say: “no.”

Gab is staring into the face of Silicon Valley, the mainstream media, billionaire oligarchs, and the political establishment at arguably their peak of power in world history and daring to say: “no.” We’ve built a digital Noah’s Ark to escape the tyrannical flood of censorship from the Silicon Valley elite and those in power have spent years trying to destroy us for it.

Christians must once again become Dissenters in today’s world, but in order to do so they must stop being wimps and rise up to the battle God is calling them to fight.

“The unbiblical idea of “spirituality” is that the truly “spiritual” man is the person who is sort​ of “non-physical,” who doesn’t get involved in “earthly” things, who doesn’t work very much or think very hard, and who spends most of his time meditating about how he’d rather be in heaven. As long as he’s on earth, though, he has one main duty in life: Get stepped on for Jesus.

The “spiritual” man, in this view, is a wimp. A Loser. But at least he’s a ​Good ​Loser. The teaching ​of the Bible is very different. When the Bible uses the term​ Spiritual, ​it is generally speaking​ of the Holy Spirit ​(which is why I use a capital S). To be Spiritual is to be guided and motivated by the Holy Spirit. It means obeying His commands as recorded in the Scriptures. The Spiritual man is not someone who floats in midair and hears eerie voices. The Spiritual man is the man who does what the Bible says (Rom. 8:4-8).

This means, therefore, that we ​are supposed to get involved in life. God wants us to apply Christian standards everywhere, in every area. Spirituality does not mean retreat and withdrawal from life; it means ​dominion. The basic Christian confession​ of faith is that ​Jesus ​is ​Lord ​(Rom. 10:9-10) – Lord​ of ​all things, in heaven and on earth. As Lord, He is to be glorified in every area (Rom. 11:36). In terms​ of Christian Spirituality, in terms ​of God’s requirements for Christian action in every area​ of ​life, there is no reason for retreat.” – David Chilton

The time for emasculated, retreatist, “tolerant” Christianity is over.
We will not tolerate our destruction and persecution in our own countries.

The time for being Christian in name only is over.
Practice what you preach and live it. Lead by example.

The time for attending a church that compromises on the Gospel and the work and life of Jesus Christ is over.
Get yourself in a church that glorifies God instead of glorifying the world.

The time for being a Christian wimp is over.
Now is the time for a masculine, patriarchic, crusader “Jesus is King” Christian revival.

All heathen cultures have been statist and tyrannical, for a people who reject God will surrender themselves and their property to a dictator. ​ (1​ Sam. 8:7-20) -David Chilton

-We must refuse to accept or embrace the evils of critical race theory, cultural marxism, and “wokeness.” We must hate these things and all forms of evil that seek to destroy us. (Psalm 97:10)
-We must refuse to compromise on the Gospel and the teachings of Christ in the name of the false gods of “tolerance” and “acceptance” and “diversity.”
-We must protect all life, most especially the unborn and the innocence of our children.
-We must speak the truth in love and share the Gospel boldly. (Ephesians 4:15, 6:19)
-We must expect to be persecuted and shunned for these things. (John 15:20)

It’s time for you to take a leap of faith, brothers and sisters, and fully embrace Jesus Christ as King or risk being conquered and destroyed by the false god of woke marxism and its pagan army of lost souls. We must rise up and defend our freedom in the name of God or risk being destroyed from within our own nations.

Christians must once again defend, preserve, and conserve the freedom of speech at any and all costs. We’ve done it before and by the grace of God we will do it again.