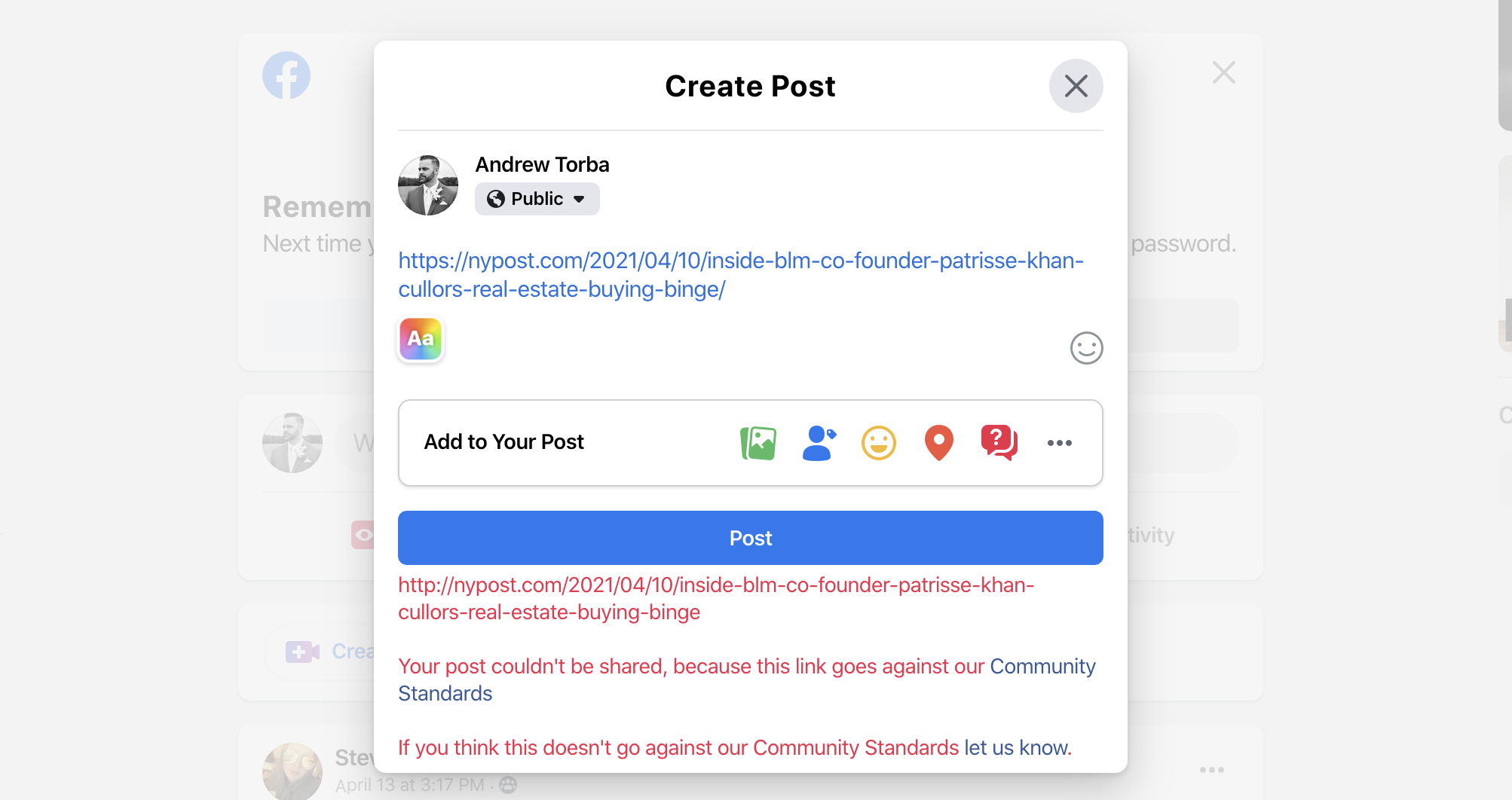 This week two incredible stories broke from real journalists who report uncomfortable truths that are of great importance to The People. The only problem is tens of millions of people won’t have any clue about these important stories, including many of our family and friends.

It’s not from lack of coverage or attention on the stories, but rather because Facebook and Twitter scrubbed the stories from the Big Tech internet and Big Media scrubbed them from the airwaves.

The first story is the explosive reporting into Black Lives Matter Co-Founder Patrisse Khan-Cullors. For two years in a row our cities have been being burned to the ground by radical domestic terrorists who seek to destroy the United States from within over perceived problems they have been socially engineered to accept as “reality.”

While the foot soldiers of the Black Lives Matter movement are out destroying the country, Co-Founder Patrisse Khan-Cullors is buying multiple high-end homes for millions of dollars. It pays to be a Marxist only when you are in an elite “privileged” position like Patrisse, the rest of us suffer and watch our country burn.

The New York Post wrote an explosive story covering the facts of this not-so-surprising story, which quickly started to go viral across Gab, Twitter, and Facebook early this week.

When this happened DailyMail.com’s additional coverage of the story started to also go viral. Almost immediately Facebook did the same thing to the DailyMail’s story telling users that it went against “Community Standards” when they tried to share the link.

At the same time Twitter locked out journalist Jason Whitlock over a tweet criticizing Patrisse Khan-Cullors in response to this coverage. Apparently from her privileged position of power, Patrisse can have her Silicon Valley friends shut down any criticism of her on the internet.

This same privilege was given to the Biden Campaign back in October. As the Hunter Biden Laptop From Hell story was being broken the New York Post was locked out of their account and users were unable to share their coverage. Twitter later reversed this admitted it was “unacceptable,” but only after the story was successfully shut down when it mattered most. Not to be left out, privileged Chelsea Clinton demanded that Facebook censor a video by Tucker Carlson.

James O’Keefe and Project Veritas broke a massive story with video recordings of CNN Technical Director Charlie Chester boasting about that “fear is what drives the numbers” at CNN and that their ratings are “gangbusters” with Covid coverage which is why they continue to “constantly have the covid death toll on the side.”

This story was dominating Twitter all week as O’Keefe ran the classic daily drip campaign leaking different clips everyday to capture the entire week’s news cycle. It was working flawlessly, that is until Twitter permanently suspended his account. You can follow Project Veritas on Gab here.

We live in a world where tens of millions of Americans will never see these incredible stories specifically because Big Tech and Big Media don’t want them to. Think about that. A handful of people at a handful of companies decide what billions of people are allowed to see online and on TV.

If your family members, friends, and co-workers have never seen anything about these stories due to censorship from Big Tech imagine how much more they haven’t seen and for how long.

If they are zoned into the fear propaganda of CNN as their primary source of “news” and “information” what common ground can you possibly stand on with them? This is the result of the divide and conquer strategy of The Enemy.

Many minds are enslaved to the Oligarch’s systems of control, but they are not beyond saving. I believe the Holy Spirit is opening many hearts and minds in regards to everything that is being done by the demonic oligarchic elite of our world.

We need to approach people with love, humility, and kindness. Please remember that our family members, friends, and co-workers are not The Enemy. They are victims of The Enemy’s destruction and we should not blame or attack them for that. This is a spiritual battle and The Enemy wants us divided and conquered.

The first step is talking to them about Big Tech’s Ministry of Truth and breaking them out of the Big Tech and Big Media mind prisons. If you can get your friends and family to remove Big Tech platforms from their lives or watch less TV that would have a dramatic impact on “flattening the curve” of tyranny and destruction that we see rising to the surface.

Keep the faith my friends.