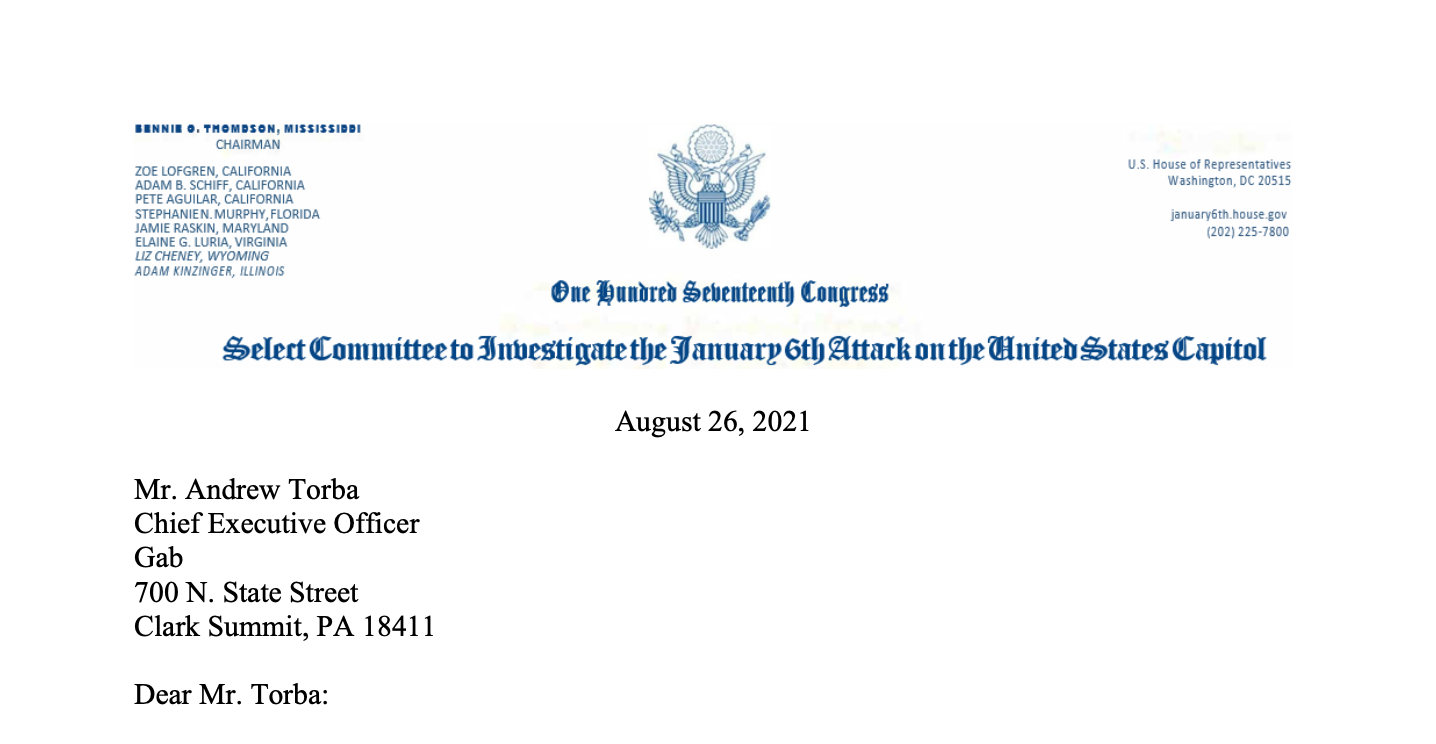 Gab Receives A Letter From Congress

Yesterday evening Gab received a letter from the Select Committee to Investigate the January 6th Protest at the United States Capitol.

You can read the letter here:

By way of further background about our company, Gab exists to promote freedom of speech, by which we mean all speech which is protected speech under the First Amendment of the U.S. Constitution. No more, no less.

Accordingly we have a zero-tolerance policy towards threats of violence and unlawful speech. As to controversial but nonetheless legal speech we believe, as Justice Brandeis did, that “sunlight is the best disinfectant, electric light the most efficient policeman.”

We have been boycotted by virtually every company in Silicon Valley because of our adherence to this moderation policy. In their zeal to bend to “woke” political agendas or outside pressure groups, our contemporaries in the Valley forget the social importance of letting off steam and of exposing bad ideas, and bad people, to public scrutiny.

As we are a free to use online publishing platform, it is inevitable that criminal actors will seek to abuse our services, as indeed they abuse all online services.We work hard to ensure that our services are denied to these bad actors.

For example, in the lead-up to the inauguration, we were made aware of a number of accounts which sought to spread division and fear through the use of unlawful threats. All accounts of this type that have been discovered have been banned on discovery, including at least one account which published threats against a number of U.S. election officials and was the subject of significant media coverage, including media coverage which incorrectly stated that we failed to take action against the subject account.

We look forward to getting in touch with the Committee in the coming weeks especially given the recent news that the FBI has found “scant evidence that the Jan. 6 event at the U.S. Capitol was the result of an organized plot to overturn the presidential election result, according to four current and former law enforcement officials.”

We anticipate that responding to this letter will cost a significant amount of money for legal expenses. If you would like to help us cover these costs we would appreciate you making a donation or upgrading to GabPRO to support us.