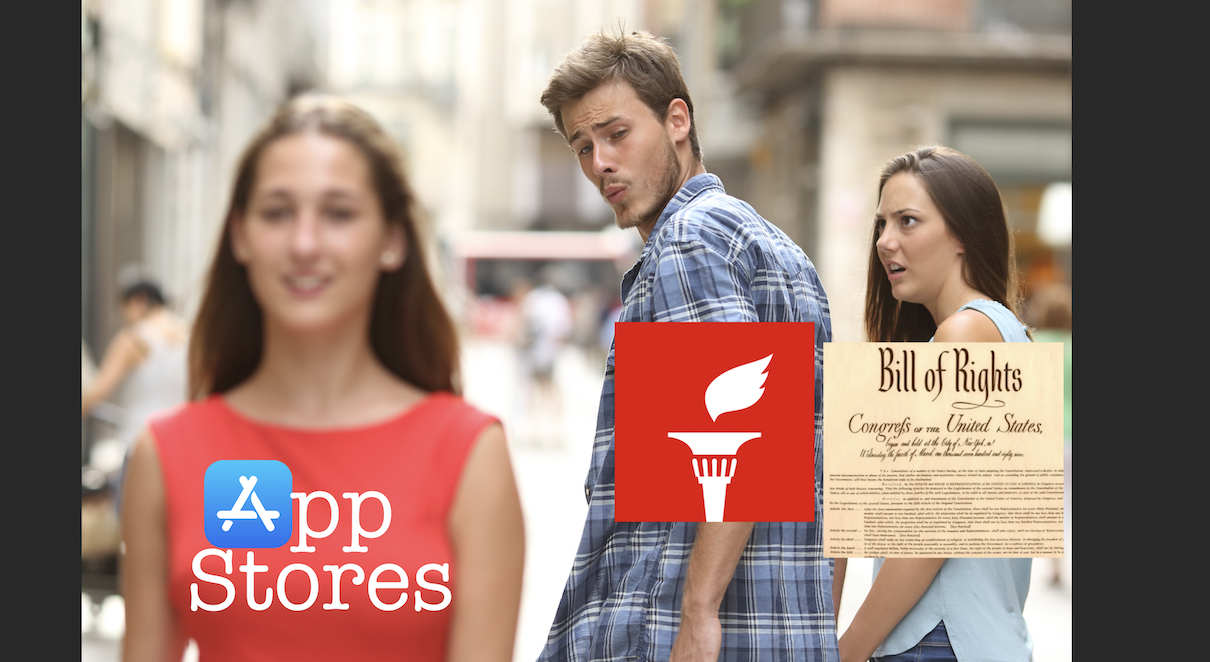 Both of these events were the shots heard around the internet and shocked millions of people into finally taking action and leaving Big Tech platforms for good. Gab was their only option and Gab remains the only option for those seeking a true unwavering commitment to free speech online.

These events weren’t a surprise to me. I knew from first hand experience that Parler stood no chance at challenging Big Tech platforms while being fully dependent and built on top of Big Tech infrastructure. I had already tried this with Gab early on and failed when the Regime banned us from App Stores, hosting services, payment processors, and much more back in 2018. Any platform that depends on Big Tech hosting and Big Tech app stores is doomed to failure. You must unapologetically stand firm in your principles and build your own infrastructure separate from Big Tech systems completely in order to have a free speech platform.

Months after being removed from the internet Parler returned, this time with a “troll filter” and artificial intelligence to remove “hate speech” on demand for Apple. They bent the knee, and they paid the price for it. Today Parler’s traffic is a mere shadow of what it once was. This blog you are reading right now gets more views every month than all of Parler. It turns out that censoring “hate speech” in order to get back into Apple’s good graces wasn’t the best business decision.

Yet only a year later it seems that conservatives have still not learned their lesson. Up pops former CNN contributor Jason Miller’s Chinese billionaire-funded Gettr claiming to be a “free speech” platform. What Miller doesn’t tell you is that Gettr depends on Amazon AWS for hosting along with Apple and Google App Stores for distribution, just like Parler did.

To Gettr “free speech” is nothing more than a marketing slogan to lure you into their beltway establishment hug box run by leftists pretending to be conservatives.

Gettr is already banning America First patriots for no reason.

Gettr is shadowbanning reporters who ask why.

Gettr is banning certain words they do not like.

The real Big Tech Exodus is authentic and it has staying power.

Our movement is not some astroturfed grift by billionaires who do the same things Big Tech does.

Claiming to be a “free speech” platform for marketing points isn’t going to fool anyone for very long, as Parler learned the hard way and as Gettr is learning now. If you are going to actually defend free speech online for all people then you better be willing to pay the cost of doing so. It’s not as simple as building your own social network and slapping some “free speech” marketing on it. You have to be willing to build your own parallel internet in order to defend a terms of service that explicitly protects all political speech and that’s exactly what Gab is doing. In fact, Gab is the only one doing this.

I’m glad that more Big Tech alternatives are being created, but as I have written in the past I won’t stand by and watch good people be lied to and misled by billionaires trying to grift them. I have been praying for five years that others find the courage to build on top of the same principles that Gab has, the principles that make America great. Thus far all that has been presented by the market is astroturfed grift by shadowy billionaires.

I’m not some DC insider. I don’t come from money. I’m a blue collar dad running Gab from the middle of the woods on a homestead with my family. I’m not building Gab to make more money for some billionaire. I’m building Gab to defend free speech on the internet for all people. Our mission has been the same for five and a half years now and our commitment to that mission is why despite having multiple billionaires trying to subvert our movement they have all failed and will continue to.

If you want to help us continue to grow and provide the only true free speech alternative on the internet then please tell a friend or family member about Gab this week. All of our growth is powered by word of mouth advertising. If you tell three people about Gab and they tell three people suddenly Gab starts growing very quickly in a way that the Regime cannot stop. They can ban us from running ads in all of the usual places to get the word out about Gab, but they can’t ban you from telling your friends about us.

If you want to help us expand our servers, hire more engineers, and grow the site please consider upgrading to GabPRO or advertising your business on Gab. We don’t have billionaires to fall back on.

Gab is years ahead of anyone else trying to imitate what we are doing. This quarter we will be launching GabPay, our Paypal alternative as well as Gab Marketplace. These two projects are going to introduce the world to the Parallel Economy that is thriving on Gab. We can’t wait to continue building and growing with you, so be sure to tell a friend about Gab today and join the real Big Tech exodus.

Also please save this link for how to get the Gab app on your phone. It will be crucial to help your friends and family get on Gab especially since we are banned from both app stores.