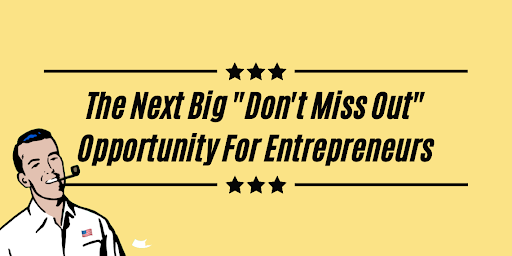 The Next Big “Don’t Miss Out” Opportunity For Entrepreneurs

The parallel economy is the most exciting opportunity for entrepreneurs since HTML and the dot-com boom. Some Americans have realized this, and have built their latest ventures on alternative tech in states that value freedom and prosperity. Others don’t see this massive gold mine of opportunity yet, dooming their businesses to the inherently rigged games hidden behind big tech infrastructure.

I’m writing this post today because I want more people to wake up to this once-in-a-lifetime opportunity. Forget all the politics, censorship, lies, and corruption with mainstream platforms for the moment, and think about building something that lasts in the parallel economy. Gab has already proven there to be a market for alternative technology, so ask yourself:

By the end of this post, I hope you feel inspired to create solutions for our society and its problems, instead of just complaining about them as most people do. This is your sign.

Entrepreneurship should be fun and exhilarating. It’s where opportunists seek problems and solve them through competition, grit, trial and error, determination, and patience. Creating a product or service to benefit the masses.

A flourishing society is one where this process is free, nurtured, and encouraged. But sadly, entrepreneurship has been under attack for years. Woke institutions, big tech, and socialist-leaning governments have created barriers and obstacles that paralyze innovators, instead of creating a better playing field for founders and their next venture. Some of these obstacles include political correctness, centralized control over the flow of information online, and disincentivizing tax structures that deter aspiring entrepreneurs from participating in the game of entrepreneurship entirely. Fortunately, all of these areas have improved upon in recent years, with free-market pioneers emerging from the woke ruble to create something brand new known as the parallel economy.

The motivations of those leading this movement are simple; If mainstream outlets are going to alienate half their consumers by pushing anti-America, anti-family, and anti-capitalist agendas, then we will just build our own infrastructure!This future was taken seriously by Gab’s CEO, Andrew Torba, but has since become popularized thanks to other institutions like The Daily Wire and GiveSendGo, amongst many more alternative tech platforms and America First initiatives.

As I’ll touch on more later, these leaders have helped paved the way for other entrepreneurs by rejecting the heavily monopolized, undeniably convenient infrastructure of big tech and woke institutions. And taking on short-term sacrifices that, over time, have created new-found opportunities for entrepreneurs who share their same priorities. The road towards the parallel economy has been built, now it’s our turn to follow in their footsteps.

When Big Tech Goes Too Far

Entrepreneurs around the world have grown increasingly aware of the formidable power big tech wields in how they control the flow of information. Not to mention the data personas they have created and held onto for every user. Organizations like PayPal, for instance, have been caught taking sides in the ongoing culture wars numerous times, teaming up with entities like the Anti-Defamation League to address “misinformation” and “hateful rhetoric.” These are two vague topics that are notoriously viewed as slippery slopes for censoring content, which oftentimes favors viewpoints that correlate with progressive and secular values over conservative and Christian ones. This big brother approach to who controls information in our modernized public square of Facebook, Twitter, Instagram, and other big tech platforms, is literally shaping and distorting our realities. People who have caught on to this plaguing side effect want out.

Sites like Reddit have been known to automatically downvote posts and comments that go against mainstream talking points. And have also been accused of artificially manipulating what content rises to the top of its main page. This is why users often complain about seeing seemingly random and out-of-touch woke ideas that most users find offensive or inappropriate. Who knows what is ultimately going on behind the scenes at Reddit, but one thing is for certain; there is an enormous lack of faith for balanced moderation in today’s digital world.

The good news is parallel economies have created an alternative marketplace for the ideas our big tech overlords deem “inappropriate.” So now, instead of cowtailing to the Silicon Valley cronies behind computer screens, entrepreneurs can feel confident in investing their time, money, and energy into platforms and emerging industries that are more sustainable and supportive. This is critical because alternative technology used to be considered unreliable. Since those early days, alternative tech has been improved upon routinely thanks to massive increases in users and funding, resolving many of the biggest complaints such as buggy features, security concerns, and lack of trust.

Ironically, all three of those areas have since shifted from alternative tech’s court, and on to mainstream platforms. Making business owners reconsider their vulnerabilities with sites like Facebook and Twitter at higher levels than ever. For example, a company can be tanked overnight if Zuckerberg were to permanently ban its account. Entrepreneurs know this, and have begun operating their marketing efforts more cautiously to avoid massive revenue hits from algorithm or terms and condition changes. One shift in narrative could be detrimental to business and its engagement capabilities if its enterprise is built on Facebook infrastructure alone. Just look at how big tech hinders the Babylon Bee’s outreach potential.

Even worse, entrepreneurs face growing fears of losing their banking rights for demonstrating opposing political beliefs. What we’ve seen from banks in recent months has been a form of economic warfare that would have been unthinkable just a few years prior. Banks have been reportedly freezing and closing bank accounts of citizens who simply support ideas that break elitist rules or go against the ruling class. Mike Lindell had this happen to him when he was de-banked because of a “reputation risk,” just like how freedom convoy donors had their assets frozen for the heinous crime of attributing a handful of dollars towards a cause they believed in.

The parallel economy softens all these concerns. It rejects mainstream institutions and their views on what is considered appropriate and puts that power back into the hands of consumers. Platforms like Gab have reinstated the free market system we once had, by not bounding company profits to the constantly changing rules that get trickled down from political correctness and centralized controllers on a seemingly daily basis.

Gab has built its entire infrastructure on this model, citing that all its funding comes from its users and their GabPRO subscriptions, instead of through advertisements and data harvesting. Two avenues that are often known to eventually get messy, especially in today’s political climate. We are already seeing these problems in new sites like Trump’s TRUTH Social, where Apple has instituted a set of rules the emerging platform must follow to remain on its app store. This is what led to the app using AI to auto-moderate sexually-explicit content and posts that include violence, bullying, hate speech, and spam. Which all sounds like the same slippery slope we see sites like Twitter and YouTube falling victim to constantly. Torba has been vocal about his strategy, claiming any app in the app store is inherently built on big tech infrastructure.

Blockchain technology has also played a massive role in how these new platforms are designed and monetized by integrating decentralization and community-powered voting systems to create a better moderation system for content. Instead of linking users to their personal information, emerging platforms like Minds allow for anonymity. Which greatly removes any concerns for data privacy altogether. Payments can be made with cryptocurrency, which increases the level of security users have when navigating their feeds.

All these improvements are revolutionary. They create a better opportunity for users in regards to privacy. All the while, they remove profit structures that have been taken advantage of by crooked founders over the years, as our world collectively learns more about the internet and its capabilities. Alternative technology separates real people from their accounts. Providing them with an extra layer of protection in today’s hyper-politicized environment. Sure there are downsides, but they are minimal, and better moderated when community-powered over-centralized. Individual players have less authority over what content gets published and deleted. Which is paramount.

These emerging opportunities give entrepreneurs an alternative to the mainstream industries that were once regarded as go-to spots for career growth. For example, filmmakers used to feel obligated to move to Hollywood for any chance at success in their field, but all that is changing ever since The Daily Wire decided to migrate its headquarters to Nashville, Tennessee. As Dallas Sonnier, the man behind all of The Daily Wire’s latest movies puts it: Up-and-coming creators, writers, producers, content creators, and marketers now have a parallel opportunity to build a career for themselves alongside a $100 million-dollar company with the same values and beliefs. This is a major incentive for any individual who is fed up with the woke-ness plaguing Hollywood, allowing people to choose the best route for their families. In short, The Daily Wire has provided options for millions of people.

Think about what this will do for the culture war, too. With even more stars like Gina Carano and Allison Williams choosing to play a part in a movement that ditches the whole leftist progressive agenda entirely. It’s only a matter of time before more talent migrates away from blue states like California and New York for places like Tennessee and Florida. Thus creating new hot spot hubs for creativity and innovation in states that are less susceptible to the whims of governors and political hacks.

Gab has already announced that it will be backing tech startups that oppose Silicon Valley woke-ism. Creating a new vein of funding for entrepreneurs to tap into when building their next venture. This is the kind of encouragement our society needs to attract talent from all fields, equipping all those who are enthusiastic with the tools, resources, and infrastructure they need to be successful in these new realms of technology. Why would someone aim to become a famous YouTuber on its heavily partisan and saturated platform, when they could create a name for themselves on Rumble? If the rewards and incentives are there, more entrepreneurs will be inclined to pursue them.

By now, you should feel motivated to start building in the parallel economy. People are fed up with the way things are being run on mainstream platforms. Just like how they are tired of progressive ideas flooding every product and service from the razors we use to the shoes we buy. To the companies who have subscribed to those messages for years upon years; You have dug your own graves. The following is a step-by-step guide for getting your next idea up and running. Think big!

Like I said at the beginning of this post; this is your sign to be a part of something bigger than yourself. Build something you know you will be proud of, and don’t miss out on this incredible opportunity to play a vital role in the development of the parallel economy.

For more of this kind of stuff, you can:

I started The Hungry Beaver because Americans want solutions. So we’re building a parallel economy. Follow along for content on culture, business, and alternative living.