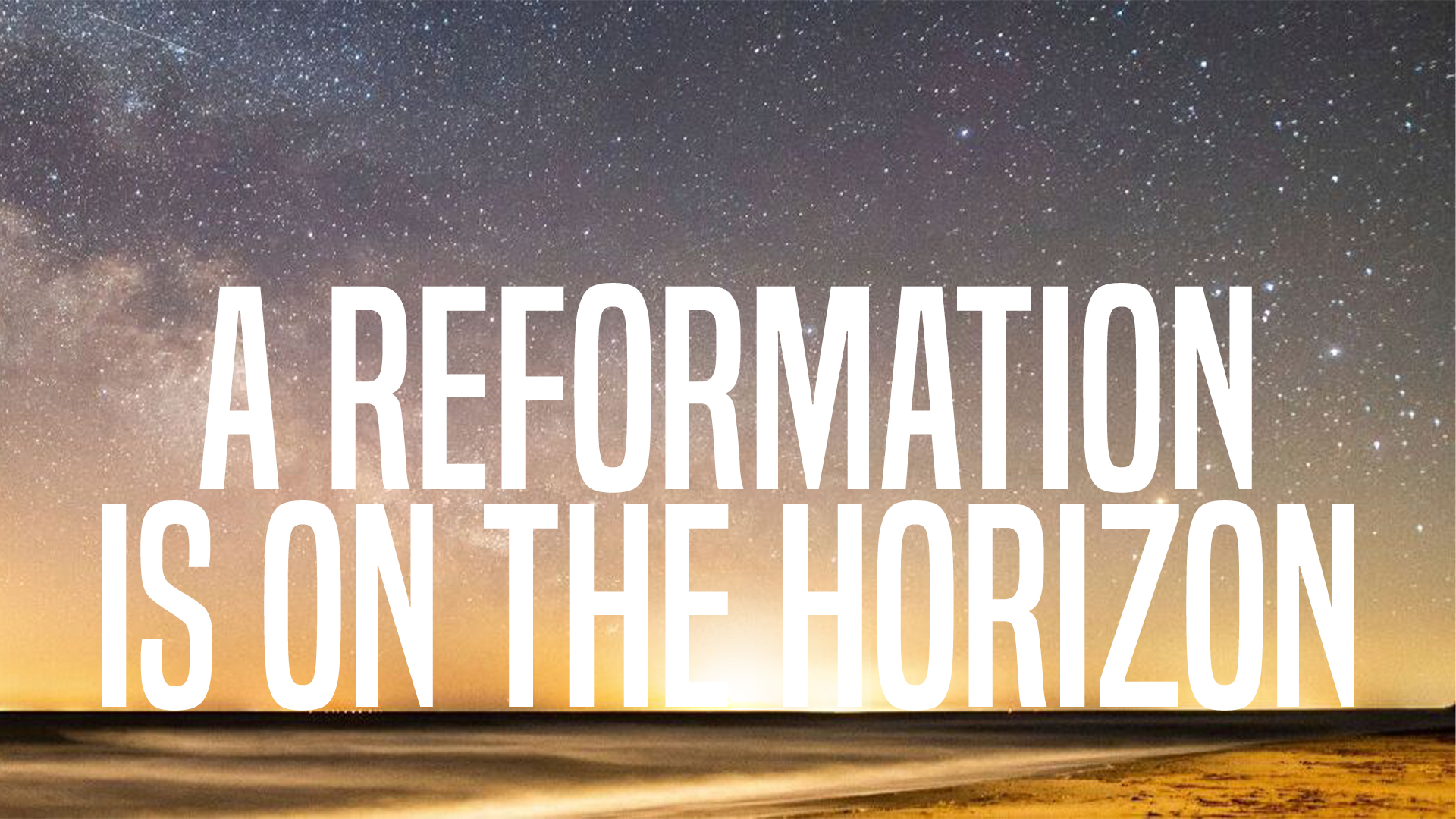 A Reformation is on the Horizon

…I think we can see it now

The cataracts from over a century of fractured theology and eschatological disappointments are beginning to fall from our eyes. The cloudy haze of escapism that would subconsciously govern our outlook on life now and in the future, the same haze which has played a role in blurring our sights on the Great Commission of discipling the nations, is finally dissipating.

A return to a robust, no-frill historic orthodoxy, along with an optimistic, hope-filled view of the future will characterize the theological framework of a reformation in this country and the world. Our lack of civil engagement, our almost unanimous withdrawal from higher education, our surrender to secularism, our lack of focus on the arts, entertainment, and even politics are all coming to an end. Our world has suffered too long. The ambassadors of our culture and the representatives who were meant to change it and bring it to Christ have been preoccupied with escaping the world instead of engaging it.

I’m speaking of course, about one of the most pessimistic eschatological systems ever created. A system that has dominated our culture and world for at least the last century: Dispensationalism.

I am not being overtly unfair by calling it pessimistic. Some of Dispensationalism’s most vocal proponents have essentially said just that:

In his book “He Shall Have Dominion”, Dr. Kenneth L. Gentry Jr. bemoans this mindset:

“We should lament the omission of the gospel victory theme in most of the modern eschatological speculation. Its replacement with a defeatist scheme for Christian enterprise paralyzes the Christian cultural enterprise, empties the Christian worldview of practical significance, and gives Christians a sinful “comfort in lethargy,” because it tends “to justify social irresponsibility.” It leaves the earth (which is the Lord’s, Ps 24:1) to a conquered foe: the enemy of our Lord and Savior, Jesus Christ. This paralysis is all the more lamentable because it forfeits the great gains made by the tireless and costly labors of our Christian forefathers, particularly from the Reformation era through the early 1900s.”

William Westfall, writing about the dangers of Dispensationalism said similarly, that it “had a devastating effect on the institutional structure of the Protestant churches, which bore the brunt of the onslaught . . . According to contemporary accounts, the prospect of the end of the world caused many people to abandon the routines of their daily existence and adopt watchful inactivity in secular and sacred affairs.”

We’ve been raised in a metaphysic of loss, hopelessness, and no future in the physical world. Our biblical hermeneutic, the lens by which we view the entirety of Scripture, God’s plan to restore this world, and our role in it, has been completely jaded by this system.

We’ve buried our talents. We’ve hidden our lights under a bushel. We’ve temporarily been fooled into thinking that engaging culture is a lost cause. “It’s all gonna burn anyway”, or as one Dispensational pastor once said, “why polish the brass on a sinking Titanic?”.

Let it not be for us, brothers. Our pessimistic paralysis is being healed. A major catalyst for that healing will be regaining a long, victorious view of the kingdom of God within the church. Much like the Puritans, who widely held to a Postmillennial and optimistic eschatology. In their eyes, the Kingdom of God is present and ever expanding on Earth. They rightly saw it all as their inheritance and their responsibility as vicegerents. The form they chose to fulfill this duty was to establish our cherished American institutions, to found our most prestigious schools, to establish mission ventures and organizations, and to participate in the transformation of our culture through social, sacred, and political means. It is high time for us to regain that vision. A new puritanism with a postmillennial, optimistic, hopeful vision of the Kingdom of God and His victorious conquest.

Jesus told us plainly, that the kingdom of God would have humble beginnings but would continually grow to maturity and dominance:

He also said in Isaiah that “the increase of His government and of peace there will be no end”. Isa. 9:7

Humble beginnings. A long time to mature. Slow growth. No interruptions. Never ceasing. Sounds like a long game to me.

A correct view of Jesus as the victorious King, not just spiritually, not just in the “Already, but not yet”, but in history, in the earth’s timeline, right now and for all time, will drastically shift our collective subconscious from one of loss, fear, disappointment, and escapism, to one of victory, courage, patience, and engagement.

The message of Christ’s Kingship and victory is meant to be heralded from the mountain tops! A message delivered to a once conquered and enslaved people. A message that the old regime has been defeated, and a new King has been crowned! A King that has liberated them from the curse of the old. A King who ascended to the right hand of the Father and now rules and reigns. That message must be actualized in reality, not spiritually contextualized because it’s hard to see the progress in our timeline. We belong to the King…our charge is to press the crown rights of Christ, to claim ground already purchased for the Kingdom. Not by might, nor by power, but by the Spirit of the living God.

A reformation is on the horizon, can you see it? It’s art, books, media, institutions, technology, businesses, publications, sermons, editorials like this one, and a thousand other mediums that will help foster the change needed in our eschatological framework, and get us busy again about transforming this world, discipling the nations, and preparing this world for the coming of it’s King.

Doug Wilson describes how a torrent of content is one of the notable points that distinguishes a reformation, he writes, “when God’s appointed moment for real reformation came, Luther was the sluice gate that lifted, releasing a torrent of truth. He became a geyser of goodness. He wrote, and he wrote, and he preached, and he wrote. And it seems to me that this is one of the distinctive characteristics of genuine reformation. This is because reformers have something to say, and they are hot to say it.”

We have something to say, friends. The opportunity is now. I think it’s the perfect time to reap what Dispensationalism accidentally sowed. The church is filled with disappointment, confusion, and eschatological agnosticism. It’s harvest time for the truth, simplicity, structure, and clarity that an optimistic Postmillennial hermeneutic provides. So join me as we consider adjusting our lens. Join as we cast off the short-term pessimistic view of the future and consider a different outlook, one of optimism, hope, and definite victory.

If we truly belong to the King, if our charge is to press the crown rights of Christ, if our task is to claim ground already purchased for the Kingdom, then we must cast off our pessimism, we must remember our scepter, we must grab hold of our spade, and we must get to work. We have been commissioned by our King to do just that.

So strap up lads, play the man. This may actually take longer than we thought. Govern your families, your churches, your cities, and your nations well. Take dominion of His creation and bring it under the submission of Christ and build, casting off all fear for we shall be victorious!

His dominion shall be also from sea to sea, and from the river unto the ends of the land. They that dwell in ye wilderness, shall kneel before him, and his enemies shall lick the dust.” Psalm 72:8-11

Chris Jenkins is Deacon at Soli Deo Gloria Church in Newbury Park, CA. He is a Creative Director by day, as well as creator and Editor-in-Chief of Scepter & Spade magazine by night. He and his wife Jenn have two children, and live in Camarillo, CA. He can be found on Gab @jenkydesign and his portfolio at http://jenkydesign.squarespace.com