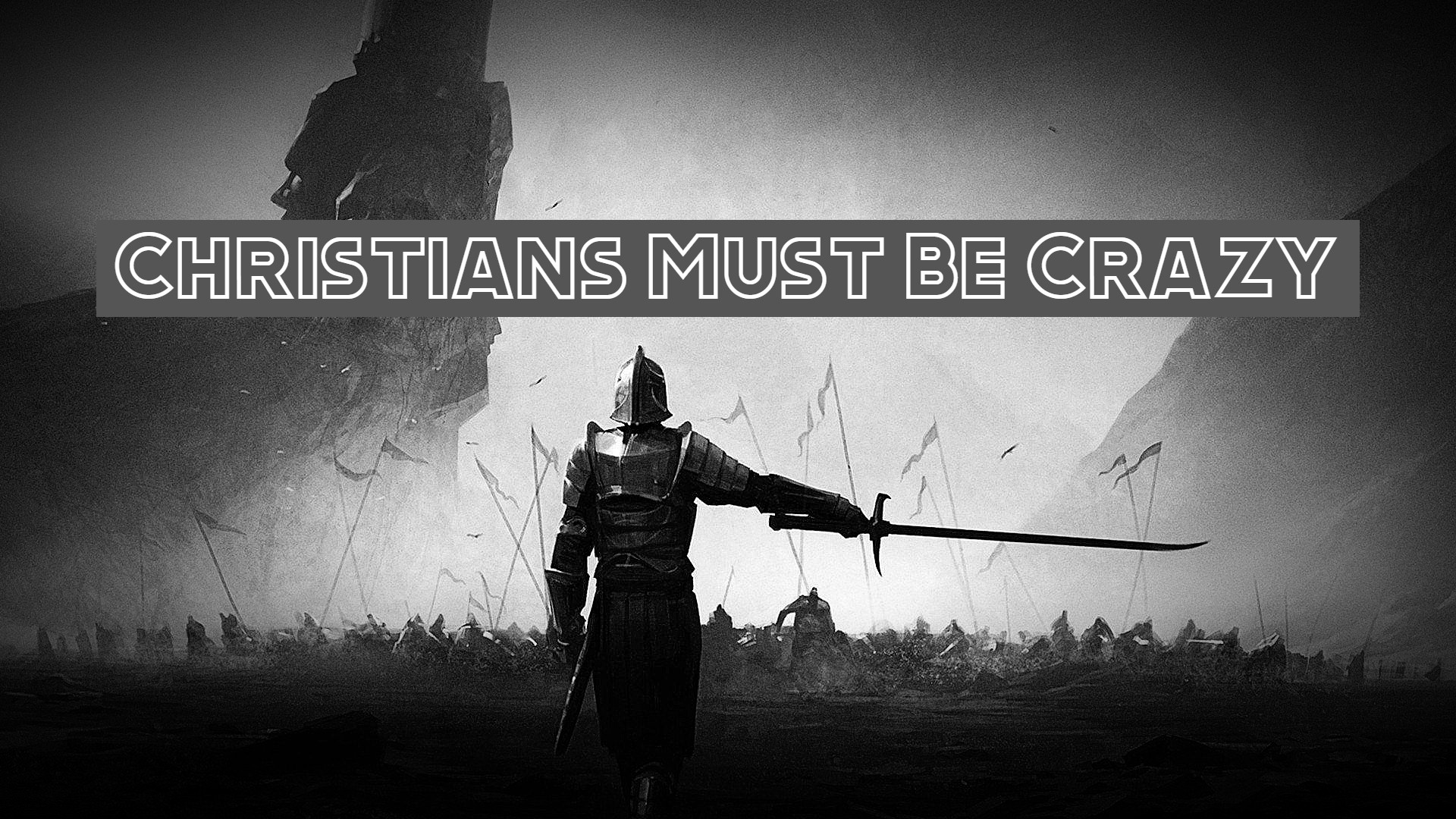 Christians Must Be Crazy

The above quote by St. Paisios reminds me of the quote from St. Anthony the Great, “The time will come when men will go mad, and when they see someone who is not mad they will attack him saying, ‘you are mad, you are not like us.’”

A Christian must be willing to be thought of as “crazy” by the world. St. Paul put forth this spiritual principle at the very beginning in these terms, “Did not God make foolish the wisdom of this world? For since, in the wisdom of God, the world knew not God through its wisdom, it pleased God through the foolishness of the preaching to save those who believe … We proclaim Christ Who hath been crucified … to the Greeks … foolishness” (1 Cor 1:20-23). And again he explains, “But the material-minded man receives not the things of the Spirit of God; for it is foolishness to him, and he is not able to come to know it, because it is spiritually examined” (ibid. 2:14).

When the madness of the world becomes the standard of “sanity” then Christians must be crazy.

The world operates heavily upon the fear of men. It seeks to control persons through the fear of being thought of as “crazy.” And yet, when we, as Christians, embrace Christ as our Lord and Savior, we embrace that which the world considers foolishness, craziness. So, the true Christian is destined to be called “mad” by those that are ruled by the real madness of the world.

St. Paisios tells us that to be “crazy” we must acquire bravery, courage (all subsequent quotes from St. Paisios are from the book, “Spiritual Awakening”). I found it very interesting, in light of current events, that he emphatically teaches that a true Christian will be brave and not fear death in the true sense (there is a vast difference between seeming “thrill-seeking” and the true Christian state of fearlessness before death). If we as Christians act out of fear then we are adopting the madness of the world through which we become cowards and lose the spiritual “craziness” needed to follow bravely after Christ the Lord.

He tells us, “Today, for one to be able to face the difficulties he encounters, he must have Christ in his heart, from Whom he will receive divine consolation n order to have a sense of self-sacrifice.” Spiritual “craziness” is rooted in bravery, which is founded in self-sacrifice. Self-sacrifice is perfectly exemplified in Christ our Lord, who, it is written, “for the joy that was set before Him, endured the Cross, despising the shame, and is set down at the right-hand of the throne of God” (Heb. 12:2). The joy was the knowledge of those many who through the Cross will be reconciled to God. He endured being thought a fool, a criminal, and the shame that follows with it, so to offer the greatest “self-sacrifice,” which is an image for all who will follow Him. He did so first and foremost to set persons spiritually free.

For this reason, St. Paisios teaches, “If anyone has not made the decision about death and is not prepared to die, nothing can be achieved. It all starts from here.” And with words that hit very close to our modern worries and cares, he proclaims, “If people do not think about death, they are living outside of reality. Those who fear death and love the vain life of this world also fear germs and are constantly overcome by a timidity that always grips them in a state of spiritual death. Daring people are never afraid of death, and that is why they struggle with philotimo and self-renunciation. Because they place death before them on a daily basis, they prepare themselves more spiritually and they undertake daring discipline.”

And what can we say of a world that trembles before a virus? Or Christians who are willing to whole-sale the holy things of the faith to “keep people safe” from a virus? This quote made me wonder about that. Is God allowing current events, in part, so to expose our possible state of lukewarmness and spiritual cowardice? How have we, as Christians, behaved in the face of the threat of death (in the form of a virus)? I believe we must contemplate this deeply. Have we shown spiritual heroism or cowardice?

As we now all face a daily and constant assault of propaganda and “information,” much of which is purposely intended to destabilize and confuse people, St. Paisios gives use much needed spiritual advice, “We mustn’t lose our cool at critical times. We must stay calm and let our brain think. Because, if the brain doesn’t think, one simple foolish move can become an act of betrayal. No matter what is happening, we must pray, think and act. The best way to try and face a difficult situation is by spiritual means. But today, unfortunately, we lack both types of bravery, both spiritual and the natural.”

Again I would challenge us all to ruminate, have we, as Christians, been facing the current crisis by spiritual means, or have we abdicated and placed our hopes on merely the means of men? (This is not to create a dichotomy, but rather to ask what is evident as primary in our actions?) Have we truly responded spiritually, or have earthly fears become more authoritative than our spiritual life and traditions?

The saint goes on, “Spiritual bravery is born out of sanctity and a boldness before God, that enables us to overcome a difficulty by spiritual means.” It seems very clear that any crisis is overcome, in reality, by first and foremost spiritual means. This is the primary and most vital work of believers and the Church.

What is the source of spiritual bravery? “Let us fear God, not men, no matter how evil they may be. Fear of God transforms even the most cowardly person into a brave hero. The more we are united to God, the less we are afraid of anything.”

And conversely, I believe one may say, that the more we fear things of this world the more this exposes that we lack true fear of God. Fear of the world transforms us into cowards; in such a state we may well surrender heavenly things to keep worldly status.

Offering us hope with sternness he says, “If you are not somewhat spiritual, you will not be able to endure.” Somewhat! Glory to God! We have hope! For any of us, through our desire and the grace of God, may be “somewhat” spiritual. Let us be somewhat brave and fearless!

The saint also identifies the modern lack of zeal as a symptom of spiritual cowardliness, a very real peril in our times. It seems the word apathy could be given to this state. Frequently, dangers are seen, to some degree, and no one wants to do anything about them nor even warn others. He elaborates, “Today most people prefer that others get the snake [image for danger, my note] out of the hole. Fine, but if they are unwilling to get it out, at least they could give a warning, ‘Be careful, there may be a snake in that hole.’ This way one can approach an issue with some degree of caution and preparedness. But even that is not done.” Thus we see, if we are not willing to take on the “snake” ourselves (by God’s grace), he says at least let us warn others. I noted this spiritual principle in my article about being a spiritual watchman. Yet, lamentably, even that rarely happens. Somehow it seems a false mentality has crept in. Even many Christians believe that “leaving the snake” alone is somehow the more virtuous way. “Just focus on the positive!” “Don’t frighten people about snakes!” But to do so is, in reality, to cause greater harm to people (that’s not to say everything must be a warning but that there is, as in all things, a balance.)

Then St. Paisios gives us modern Christians a strong rebuke, “If we had lived in the times of the martyrs, given the rationality we have, we would probably say, ‘I only deny God externally, not internally; this way I’ll have my position and be able to help some poor soul” – as a side, note how the enemy frequently uses the delusion of “care for others” to deceive people; consider how “care for neighbor” is being manipulated in current events – “Back then, even if only incense was thrown into the fire of idol worshippers, the Church would excommunicate them, making them penitents in tears … Or, during the Iconoclastic controversy, people were forced to burn or destroy Icons, and they preferred martyrdom rather than desecrate the Icons …” And what should we think as many forbid, in our times, the veneration of icons for fear of spreading a virus? Or the other massive alterations in holy church practices? What would the saint say unto us?

Have we lost our spiritual bravery? I ask with a deep desire that we all, myself included, meditate on these courageous words from St. Paisios.

Thus, what must we acquire so as to spiritually endure these times? We must be willing to be thought of as crazy. We must have spiritual (and even natural) bravery. We must live above the constant fear-mongering of the world, most of all as it seeks to control people through the fear of a virus, death, and so forth. It seems very evident that to act out of a position of fear of worldly things, and thereby adapting worldly madness, will bring nothing but spiritual disaster in the end.

May we hear the instruction of this saint. May we fear nothing but God alone. Let’s risk being a little crazy.

Originally posted On July 15, 2020 on inklesspen.blog