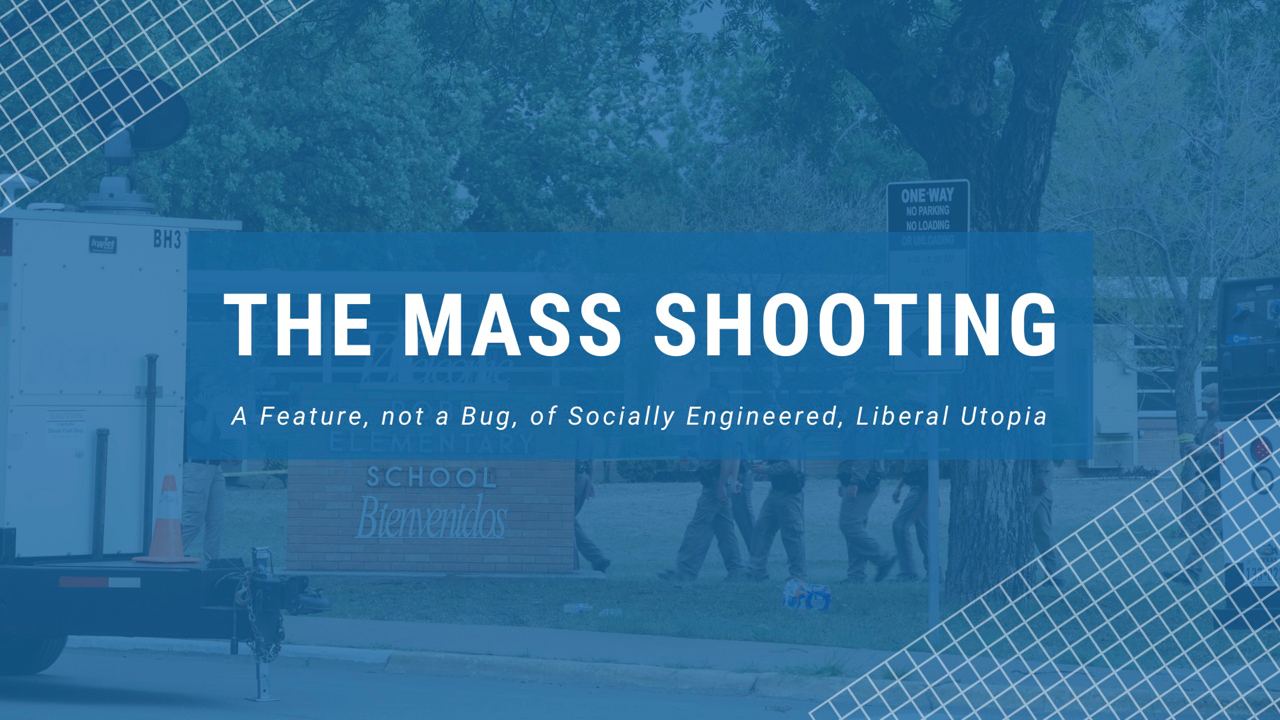 It is hard to fully comprehend just how totalitarian such designs are. But these are the very same sadistic freaks who successfully locked those 330 million people in their homes for weeks or months, and then (mostly successfully) restricted their ability to provide for their families if they refused to get an extremely dangerous mRNA injection that does not even accomplish its intended purpose. All you are to them is a guinea pig or a rat in a social experiment. You do not matter. Your children do not matter. You only exist to provide them with power.

You must understand that school shooters and other mass shooters are an extremely acute symptom of the disease that horribly afflicts the American nation. You live in an incredibly sick society, and since you are born into it and live in it every day, you go about your life mostly unaware of just how dreadful things really are. It is imperative for the people who manufacture the inversion of reality that you perceive everything through the lens of the now. This is why “The Current Thing” has such memetic power: it attacks reality distortion at its source, where obsession over what is, right now, cuts you off from any sense of historical perspective. In the case of mass shootings, the exclusion of historical perspective keeps the masses from noticing that mass shootings are a very recent phenomenon and that decades ago, when the United States had vastly more liberal gun laws, and anyone could even purchase fully automatic submachine guns in the mail, this never happened. The question you should ask is, why not? What exactly was different about America 90 years ago compared to today?

The answer to that question is fairly obvious. Modern American society is a factory for psychopaths. The young man in the North American Continent is planted in a field fertilized by atomization, loneliness, and hopelessness. Many have never met their father, and most do not have anything remotely close to a “good relationship” with him. Most have no meaningful connection to the community in which they live, nor even the nation they inhabit. In school, they are social outcasts, driven to niche internet communities for the only semblance of human interaction in their lives. They are marinated in hardcore pornography from before they have even reached pubescence. They know (or at least perceive) that they will never know the love of a flesh-and-blood woman. They are on the kind of pharmacological cocktail that any premodern society would only ascribe to witchcraft and demon possession. They have nothing to live for and no one who loves them. Given how many young men our nation is producing like this, the question we ought to be asking is not “why does this happen?” but rather “why does it not happen a lot more?”

America is an incredibly sick nation. There is a spiritual sickness that pervades everything like a dark cloud. The people who dominate every institution in our nation have held this power for at least sixty years. For these sixty years, they have treated this nation as a grand social experiment. They have made the natural family, the very bedrock of human civilization, an antiquated, outdated institution that we have progressed beyond. They have financialized and commodified all of human life, uprooting people from their homes and extended families, and making them mercenaries chasing after a rapidly devalued dollar. They have exported the industry of the nation impoverishing the heartland of the country and leaving them to languish in despair. They actively cheer the deaths and replacement of the hated population, while at the same time denying this was ever their intent. They have introduced racial and ethnic strife, and in the chaos actively undermined rule of law. Sixty years of full-spectrum control by utopian social engineers have transformed the most affluent society in human history into hell on earth.

This did not happen by accident. These people are motivated by a deep hatred of humanity. Like the geriatric that currently occupies the Oval Office who well represents them, they simply do not care how much people suffer. You might think the progressive is merely mistaken, deluded by ideology. This is not the case. They have had more than sixty years to see the full extent of human misery their ideology produces when applied to the healthiest and most prosperous conditions. They know what they are doing.

But what is to be done? The utopian bugmen that dominate our nation must be overcome. You must personally re-capture the same spirit of Christian America that built a great nation. You must do all within your personal sphere of influence to rebuild the things that our enemies have destroyed. You must rebuild churches dominated by liberals and weak-willed conservatives. You must rebuild neighborhoods and communities with people who, like you, love the nation that their great, great-grandparents built and who want to worship the same God who gave them such strength. You must devote your life to both retaking what institutions you can, and creating alternatives for the institutions you can’t. It is not simply enough to decry that the libs have ruined everything—of course they have, they are like cancer! You must have a vision for your people, you must provide for them the thing they have taken away: hope for the future. We can again have the world that the liberal globalist regime has destroyed. A world where the fear of the Triune God pervades the land and not hopelessness and despair. You can have a world where things like mass shootings never happen again, but you must devote yourself to a life of repentance, faith, and an unquenchable passion for the true, good, and beautiful things God has given.