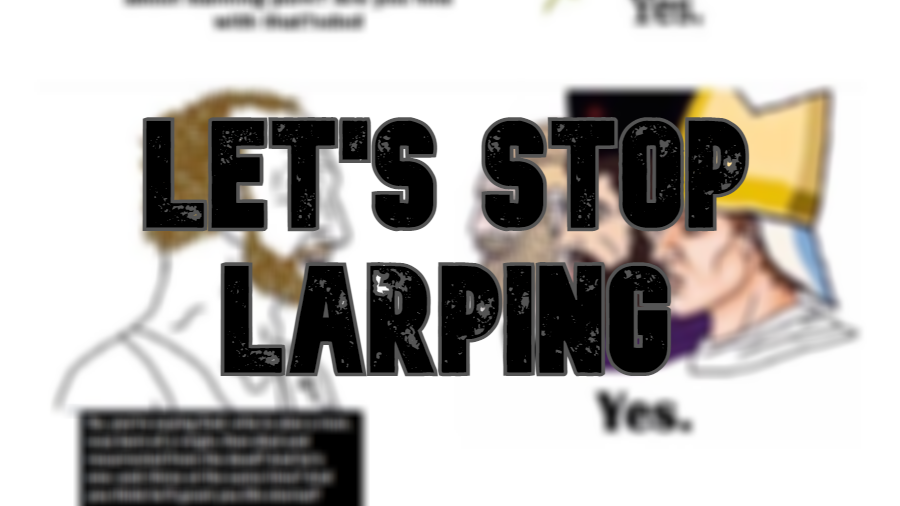 Ever since I first encountered the dissident right on 4chan, I’ve noticed a trend of what we can call BASED Christianity, or LARPing. (Live Action RolePlay, a term used these days to denote someone pretending to be something that they really aren’t for shallow purposes).

If you spend a lot of time on right wing social media, you’ve definitely noticed it. If I were to sum it up, it’s becoming a Christian for the wrong reasons – aesthetic, reactionary, or political reasons. I’ve seen it all.

One who converted “because of Touhou” (a Japanese video game). Many who converted because their favorite political streamer said it was “based”. Many who saw so-called “Little Dark Age edits” and thought they looked cool.

And most egregiously of all, a young man who said that watching Japanese V-tuber Gawr Gura sing “The Last Stand” by Sabaton spurred him to look into and convert to Roman Catholicism.

“What’s wrong with those reasons?” some may ask. “Isn’t it good that people are being led to Christ no matter the reason?”

Yes and no. Some have found true peace, forgiveness, and reconciliation to God after maybe having a carnal start. But unfortunately, some don’t mature past this stage and forever have a stunted view of Christianity.

Let’s break down exactly what’s happening. We live in a period where atheism and apathy are at an all-time high. There’s no regard for God’s rulings on life or marriage. The youth have mostly been lured in by the siren song of hedonism, but not all.

A remnant has turned down the popular path and decided they want nothing to do with fornication and partying. Some were raised with good morals, some were self-educated. (I remember being young and reading studies on the negative effects of premarital sex on 4chan, good times!)

But what’s the alternative? For young people, it’s bodybuilding, outdoorsmanship, other hobbies, and of course, politics. After all, the handwriting is on the wall. America is under attack and we aren’t happy about it. You’re on Gab, you know this. And the youth with the wisdom to avoid the mistakes of their peers also have the wisdom to understand what’s happening in this sick world.

Unfortunately, even right-wing politics have become just as secularized as the rest of America. Supposedly 55% of Republicans support homosexual marriage, according to Gallup. This is an atrocity!

So within the right wing, many are becoming disillusioned with the “mainstream”. They understand that we’re missing something. Something foundational, something that made us great to begin with. That, of course, is God. The Christian (and only) God, to be exact. This is where it starts to get ugly, however.

Don’t forget the ancient error of the Pharisees. They expected a Messiah who would overthrow the harsh Roman yoke and establish a Davidic kingdom of prosperity and peace. Jesus subverted their expectations by instead rebuking their hardness of heart and hypocrisy. So they killed Him.

The crux of the issue was, they wanted an earthly leader, not a spiritual one. This error is still alive and kicking.

I’ve witnessed that for some, Jesus is King, but not quite their Sacrificial Lamb, High Priest and Prophet.

Let me explain. They want Jesus to crush all their evil enemies, but they aren’t washing their robes in the blood of the Lamb – also known as sanctification.

Secondly, Jesus, our High Priest, allows us to enter into the presence of the Almighty. “Let us therefore come boldly unto the throne of grace, that we may obtain mercy, and find grace to help in time of need.” – Hebrews 4:16

But few LARPers take advantage of this privilege. Their Christianity does not manifest in a practice of prayer – except for maybe a quick plea that they could find a girlfriend.

Finally, they ignore what Christ revealed to us as the greatest Prophet to walk the earth. They do not practice, for example, the tenets explained to us on the Sermon of the Mount. Jesus’ teachings are very dangerous to ignore.

“I will raise them up a Prophet from among their brethren, like unto thee, and will put my words in his mouth; and he shall speak unto them all that I shall command him. And it shall come to pass, that whosoever will not hearken unto my words which he shall speak in my name, I will require it of him.” –

But amazingly, they consider themselves fit to debate doctrine on Discord, Gab, 4chan, Twitter, etc. How can one argue about a religion that they have not even read the foundational, God-breathed text of?

My plea to everyone reading this who considers himself a Christian is to please finish the Bible if you have not already. If you are tempted to engage in an unfruitful argument with someone from a different denomination: stop, put your phone down, and go read three chapters of Scripture that you haven’t already.

So what is my point here? Am I saying that Jesus isn’t King, or that it’s not so important?

Quite the contrary. Jesus is King, indeed! His rule has already begun. It actually even extends to your personal life. If we want to be subjects of the Most High, we must obey His law – the 10 Commandments, for example. So, let us be wary of proclaiming Christ as our King if our behavior shows that the Devil is really the one we follow.

For instance, I recall recently seeing the most ridiculous tweet on Twitter. It went something like this: “My allegiance is to the Holy Trinity first….but I will kill, rape, and destroy for Nick Fuentes.”

Needless to say, this is not Christian in the least! This is idolatry, this is hatred, this is condemned by God’s Word.

On the other extreme of wicked lawlessness, we see Pharisaical behavior rear its ugly head. Men and women who instead of using Christianity as a cloak for their sins, they use it to show to the world how righteous they are.

Unfortunately I see a fair bit of the opposite. Even something as universal as baptism is turned into a virtue signal by some internet Protestants. “I’m better than the Baptists because I baptize my babies. Those Baptists hate babies because they won’t baptize them!” is an extremely common undercurrent of so-called “high church” theological discourse.

Ironically, even humbling doctrines such as original sin are twisted. “I’m the worst wretched sinner of all time that God has ever saved. You’ve never met anyone as bad as me!”

To further the disharmony, all interdenominational discourse is reduced to “dunks”. After all, that’s what Christianity is about: owning and dunking the other guy, who is “cringe and bluepilled”.

You could spend 20 minutes peacefully and carefully explaining your theological position in a long post that no one will read, or you could spend 10 seconds, totally own your opponent, epic and based style, and be rewarded with internet glory forever.

This is exactly how Jesus intended our debates to be, right? No wonder every interaction devolves into just slinging the same sorry meme phrases.

That brings me to my next point: while theology is fun, important, and can be fruitful, it is not a substitute for personal holiness. LARPers will think, “Well I want to become a real Christian…” but they think that the way to do that is learning complex scholastic theology and arguing in the Jay Dyer discord server. But the Bible teaches us, “Thou through thy commandments hast made me wiser than mine enemies: for they are ever with me.” – Psalm 119:98

We grow in wisdom primarily by obeying God, not by reading Aquinas or Calvin. Keep in mind that these theology books were written by very holy men who practiced what they preached. When you obey God, then He will open your mind to understand Him and His Word. Winning debates online gets no one closer to God. But prayer, fellowship, mortification of your sin, and worship will.

On a related note, when the day of judgment comes, God will not ask you, “Can you tell me the distinction between Augustinian soteriology and Calvinist soteriology?”

No, He will ask, “Did you visit widows and orphans in their affliction? Did you do mercy and execute judgment? Did you abstain from immorality? Did you forgive your enemies?”

If you’re reading this and you feel as if maybe you’ve been LARPing a little (or a lot), no worries. Just stop! It’s God’s gift to you and your privilege to have a faith that saves you from sin, not just the globalists.

To conclude, with this advice for all of us, Christianity is a very serious thing. The Son of God was brutally killed for our sins. Let’s not dishonor Him by using Christianity to glorify ourselves. God has greatly blessed all of us with much light regarding Him and His will. “For unto whomsoever much is given, of him shall be much required: and to whom men have committed much, of him they will ask the more.” – Luke 12:48b And please, don’t call yourself a “based trad zoomer monarchist”. That’s just embarrassing.

Skorr is a member of the Seventh Day Remnant movement, and an amateur satirist. You can find him terrorizing Twitter @tyrannoskorrus.