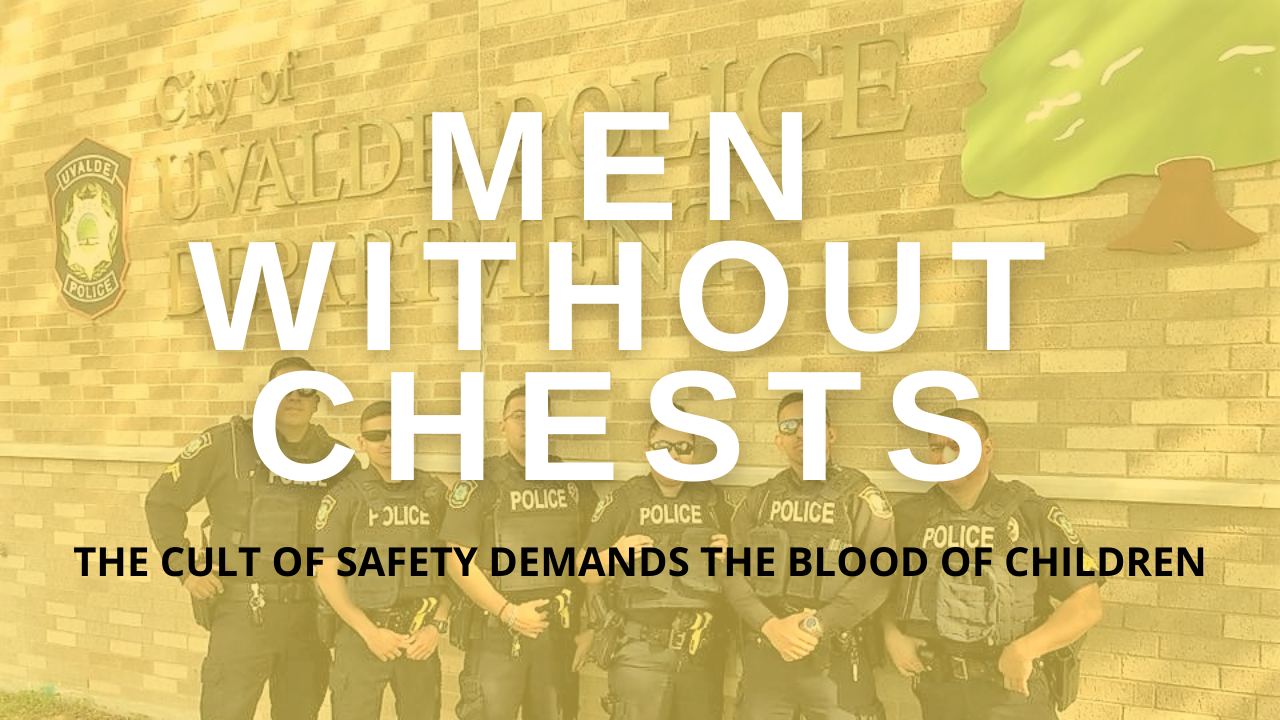 Despite changing their story more than a meth-head begging for money, one thing has remained certain: the police waited nearly an hour to go into the room where a psychotic murderer unloaded on a class of fifth-graders, dooming any wounded children to bleed to death. Allegedly, the Uvalde chief of police had personally ordered his officers not to breach the door of the classroom the killer was in, due to the danger he presented to his officers—officers with shields, helmets, and body armor, no less.

This level of cowardice is astounding, even for a society that has done all that is possible to stamp out any display of courage and masculine virtue. That not one, single officer would disobey the most egregiously cowardly orders is still something truly shocking. But we have suffered under two years of Wuhan Flu biomedical tyranny. The most basic rights of Americans were flagrantly violated with almost no resistance from anyone bearing authority, and the idea that men—who occupy these positions that require courage—are instead filled by those without a single shred of it, is not something that should be difficult for us to recognize. Everyone who had the authority to say “No! You may not do this!” Is someone who lacked the masculine virtue to say “No! You may not do this!” There were no sheriffs who told their tyrannical governors to pound sand. There were no judges who had the backbone to apply the law that respects the rights of the people. There were precious few pastors who dared to declare the prerogative of the church to meet to worship in obedience to God, over and against the diktats of an authoritarian state. There were very few doctors who were willing to break protocol when doing so would mean the difference between life and death (and also quite possibly the end of their careers). Anyone who had legitimate power to wield, to tell these tyrants “NO!”, refused to wield it. I had an elderly congregant who was refused access to his wife suffering from Alzheimer’s, who, without him had no idea where she was, and because of this isolation and intense anxiety, died days later. Doctors “just following safety protocols” killed her and countless others.

Just as the phenomenon of the mass shooting demonstrates the social, cultural, and spiritual collapse that has taken place in the last two generations—these things never happened before the 1990s despite even more widespread availability of even more deadly firearms—the cowardice shown by the Uvalde Police Department is an indication of just how far we have fallen. Safety is the driving force of everything. Officer safety. Public safety. And of course, who can forget the much-maligned safe space? Everything about the life of the American is dominated by safety above all else. The German WWI veteran and author, Ernst Jünger, wrote in his essay “On Danger” that:

The bourgeois person is perhaps best characterized as one who places security among the highest of values and conducts his life accordingly. His arrangements and systems are dedicated to securing his space against the danger that at times, when scarcely a cloud appears to darken the sky, has faded into the distance. However, it is always there: it seeks with elemental constancy to break through the dams with which order has surrounded itself.

Now, it might seem like the use of the term “bourgeois” sounds like something a filthy communist swine might say, but we should understand it in the mode of the soft, pudgy, suburbanite man whose main concern in life is whether he has enough entertainment to consume in his free time. That is the man that Jünger describes. The man whose existence bears a close resemblance to the obese, androgynous humans hovering around on futuristic mobility scooters sipping on bottomless big gulps in the movie Wall-E. Such a man’s chief end is to dwell in safety. Forget the fact that an existence within the world God has created, particularly after The Fall, is an existence that must grapple with the reality of danger. The danger is inescapable. Modern materialistic, consumerist man believes our society has triumphed over danger. But no amount of technological progress is ever going to protect you from a dangerous world. You may think you have walled yourself off from danger. “Death will never enter my cul-de-sac!” But inexorably it does. It may appear in the form of evil men, hellbent upon destruction. It may appear in the form of a disease that the hubris of modern medicine can do nothing to solve. You live in a dangerous world and much wealth has been expended to make you believe that you do not.

The spiritually sick society of modern America is not only a factory for psychopaths, it is also an assembly line of geldings. It was not always this way. We are within living memory of entire generations who gladly rushed into danger because duty and virtue compelled them to. There is a reason why people so often compare the soft and effeminate men today to the men who stormed the certain death of Omaha beach. There is a reason why cowboys like John Wayne and Clint Eastwood built the moral imagination of older generations of Americans. This was even the subject of a hysterical feminist screed, blaming toxic masculinity in the church for the rise of Donald Trump. Older generations valorized heroism, almost like God had created them to do so!

You may recall, that God created Adam to guard and defend the garden and everything in it. So often that verse is translated to make man’s basic God-given purpose to be a gardener. No. God created Adam to be a warrior. To face danger, to defend his domain against threats like a lying, talking serpent. Adam failed, and in his failure, we have been subjected to even greater dangers since. But this did not change what God created men to be: warriors.

But be not dismayed! Even as a sick and demented, soft culture has done all that it can to banish any semblance of masculine virtue; even as they have done all that they can to snuff out the fire inside men’s souls, they can never eradicate it any more than they can make the Mississippi flow north. No matter what they do, it is there.

I took my father, who served in the U.S. Army in the 60s, and has only gone to the movie theater once this millennium to see a movie this past weekend. I despise Hollywood and so does he, but I knew Top Gun: Maverick would be a movie we would enjoy. Yes, the plot was as predictable as it could get. Yes, the dialogue constantly skirted the border of cheese-fest like an F-18 flying in a canyon under the radar. None of that mattered. It was a celebration of masculinity (even with the token girl as the permission slip allowing for unbridled machismo). Fighter pilots, laughing in the face of stuffed-shirt authorities concerned with safety above all. Men who directly disobeyed orders to do heroic, selfless deeds. It was a celebration of all the things that made America great. A celebration of selfless Christian virtue buried beneath the veneer of hotshot womanizers. Of course, these things do not exist anymore in reality. The U.S. Navy was quick to point out:

[the U.S. Navy spokesman] said the Navy allowed the production to use planes, aircraft carriers and military bases even though he said the real Top Gun pilots aren’t the cocky rule-benders portrayed in the film, people who “would never exist in naval aviation.” Instead, they’re studious air nerds who toil away for hours in the classroom and participate in intense training flights at Naval Air Station Fallon in Nevada, the site of the actual Top Gun school.

No, the current U.S. military is much more concerned with conforming whatever scant remains of masculine and Christian virtue still exist in the armed forces to the rules and regulations of HR harridans. The Pentagon cares much more about whether we have enough black trans lesbians piloting fighter jets than things like winning wars.

But the fact that such a movie can be made, and that it is experienced incredible success is a testament to the fact that men willing to face danger still exist. The Border Patrol Agent who did what the Uvalde Police refused to do exists. Kyle Rittenhouse exists. And many of you reading this have the fire burning within your souls, begging for an opportunity to show valor. Take heart, as the hard times created by soft men come, such opportunities will soon abound. But in the meantime, you must reject the cult of safety. You must find even the smallest ways to prepare yourself to take up the mantle of the courageous men who preceded you. You must diligently work to become a man worthy of the honor of giving your life for others. You live in a dangerous world and you must become a good and dangerous man.