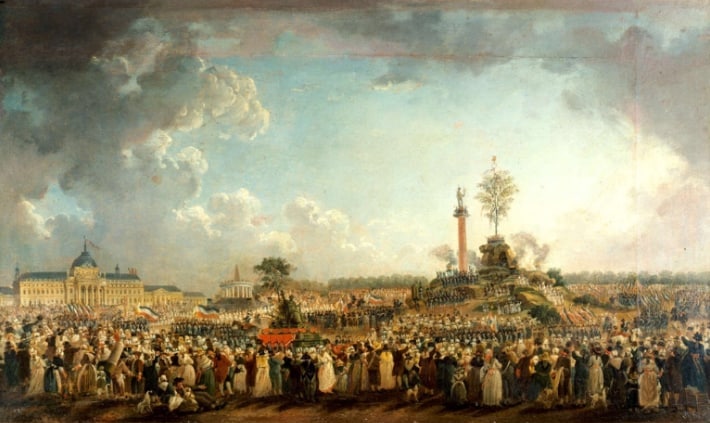 The Cult of the Supreme Being

On the 8th of June 1794, Maximilian Robespierre, a French revolutionary leader, descended from a man-made mountain in a festival procession at the Champ de Mars. It was the day of the festival for the “Cult of the Supreme Being”, a new religious holiday with a matching religion created almost solely by Robespierre to replace Christianity with something he felt more comfortable with. For all his revolutionary and iconoclastic zeal, Robespierre knew all too well that one could not remove God from the world without replacing Him with something else. This something else was a new religion he named: the “Cult of the Supreme Being”. To learn what this religion was about, we only need to read a part of the speech Robespierre gave that day;

“Is it not He whose immortal hand, engraving on the heart of man the code of justice and equality, has written there the death sentence of tyrants? Is it not He who, from the beginning of time, decreed for all the ages and for all peoples liberty, good faith, and justice? He did not create kings to devour the human race. He did not create priests to harness us, like vile animals, to the chariots of kings and to give the world examples of baseless pride, perfidy, avarice, debauchery and falsehood. He created the universe to proclaim His power. He created men to help each other, to love each other mutually, and to attain happiness by the way of virtue.”

Robespierre wanted a new religion based on liberty, justice and equality, like the young French Republic would be.More importantly, he wanted the people of France to know that not salvation, but the pursuit of happiness was a goal on its own. The cult got derailed pretty quickly by Robespierre’s execution and it was outlawed by Napoleon. However, the concept of a religion based on equality, liberty, justice and happiness has taken root in the secular European mind.

A new religion in the West
While in Western Europe religiosity has generally been declining, one cannot remove one rigid belief without replacing it with another. Our secular or semi-secular fellow Europeans have done exactly this. I have noticed many similarities between the Cult of the Supreme Being and our compatriot secular and semi-secular Europeans. Although they claim to be free thinkers who think religion is silly, they are in fact adherent to a set of dogmatic beliefs which are not to be questioned by anyone. Like most religions, their rigid beliefs have no scientific basis and are therefore almost immune to any argument that might seem to contradict them.

The new secular religion in the West, or the “Cult of the Supreme Being, Reborn” as I have named it, has established the same dogmatic principles, namely; equality, liberty, justice and happiness.

The dogmas of Equality & Justice
These two new dogmas go hand in hand as they affirm and strengthen one another, the false god of equality is now worshipped throughout Western Europe without any critical reflection on this concept at all. It is something these secular believers cling to with all their heart. They refuse to even discuss the concept, and it needs to be accepted by all not just as an opinion, but as something that is enshrined in the law of the land. Equality gives our secular friends the idea that they are fundamentally equal and they should not be treated differently as a result of their actions or opinions. Justice strengthens this concept, since not being treated equally conjures up feelings of injustice.What justice exactly is, none of these believers can cohesively formulate, but it’s a semi-religious term they will keep repeating and adapting in a way that always fits most of their own interests. These concepts of justice and equality will never be applied fairly to the non-believers of this dogma. Justice and equality is only for those who worship these concepts in the semi-vague way the cultist of the Supreme Being might do. These dogmas empower the cultist to distance themselves from people who might be anti-egalitarian, nationalist or even from those who might dare to commit the cardinal sin of racism. They do not need to be persuaded or converted, they can quickly be branded as non-believers and be ostracized accordingly.

Liberty & Happiness
The most intriguing aspect of this cult is their elevation of liberty and happiness as a strategy and goal to fulfill one’s life. The new secular religion operates by generic mantras like, ”why should someone not be able to  do something if it doesn’t hurt me?” or “everybody should be free to do as he pleases!”. The concept of defining something directly as a moral absolute good or evil has been replaced by the idea that if something brings one happiness, it must be good and it would be evil to oppose it. Liberty is key, so one can pursue ones happiness throughout life, without nearly any absolute limits included. Yet liberty and happiness are only to be granted to those who are loyal followers of this cult. If one were to argue against the holy right of liberty, one could be deprived of it. The cultist have no issue at all with obstructing the non-believers’ right to liberty and happiness as long as the believers are being granted theirs. We see anecdotal evidence of this in the near past when we look at the movement for the emancipation of homosexuals. We are not allowed to judge this movement on the basis of an absolute good or evil and we are forced to guarantee them liberty and happiness. This slippery slope will inevitably lead us to the emancipation of pedophiles, which has taken a big step forward since some Western European countries have been recognizing child marriages made in Third World countries. The LGBTQ movement is already slowly adding a P in capital letters to prepare the followers of their cult for embracing this new group. This group is of course also entitled to liberty and happiness. While it might still be fashionable to question this concept now, we should wonder how long it might take the cultists before pedophilia phobia becomes punishable by law.

The appeal of a new dominant religion
In an increasingly secular Western Europe, our progressive countrymen need something that is absolute to cling to. As Robespierre knew, you can’t remove God without replacing Him with something of equal value. The Cult of the Supreme Being grants just that, absolute concepts of good and evil which one can use to categorise people into believers and non-believers. The unique appeal of this cult is not the concept of a religion without God, it is a religion which is centered around what someone impulsively wants, instead of something one thinks he should be obliged to want. A religion that is easy to follow, because there are no hard parts. Things like sacrifice, repentance or strict rules have all been thrown out of the window. They have no relevance anymore in an era where the only supreme being that needs to be pleased, is oneself. This new religion has also been gaining a steady following amongst cafeteria-Christians: the kind of Christians who cherry pick which dogma to follow and which not, because one is after all only in this world to please oneself.

The Cult of the Supreme Being, Reborn
Although the initial Cult of the Supreme Being was a marginal episode in Western history which met with a rather quick demise, we cannot underestimate the intellectual poison the French revolutionaries injected into our societies. While Robespierre might have never envisioned his cult embodied as something as we see now, it is still Robespierre and his evil compatriots who have elevated liberty, equality, justice and happiness to the position of semi religious dogmas. They were the first ones who tried to replace God with a cult that follows these dogmas with a religious fervor unknown to the secular world until then. I can only assume Robespierre would be horrified at the lack of virtue of these new cultists. He however cannot deny he planted the seed from which this poisonous plant has grown. While the French Revolution happened a long time ago, we unfortunately will still continue to face its relativistic fallout for centuries to come.