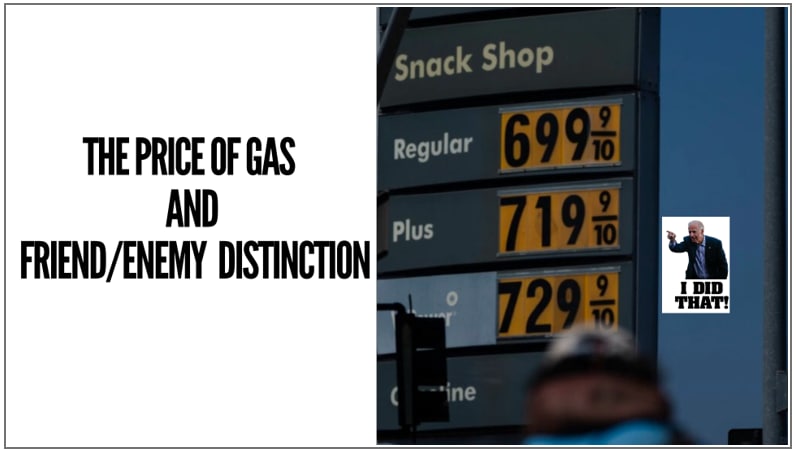 Allowing it to be framed that way while giving conservative satirists plenty of low-hanging fruit to work with, is a massive mistake. It is easy to poke fun at the stupidity of people like Joe Biden, Kamala Harris, and AOC. And that’s entirely the problem. These people are not sincerely-yet-naively attempting a solution to what they see as a truly apocalyptic disaster. It is a major mistake to assume they are ever operating in good faith. None of these people actually believe this stuff. They all have massive multimillion-dollar homes on coastlines they say will not exist by the end of the decade. It has been demonstrated ad nauseum that these people fly around in private jets, expending more fossil fuels in a single vacation than the average person will in their entire lives. You have to understand these are deeply cynical people. They do not care about the stuff they say they do. But what do they care about?

The most important filter to understand politics, especially politics in the Current Year, is Friend/Enemy distinction. Do not look at what these people say, look at what they do. And, look at who benefits from what they do or who is harmed by what they do. Who are the enemies of the occupational regime? Obviously, they will never explicitly state who it is they seek to destroy. Unless the pharmaceutical cocktail that allows the current president brief moments of lucidity is badly messed up, you are never going to hear him say “we want to totally impoverish and destroy the American middle and working class.” But every single day the actions of the regime speak as clearly as possible.

You need to stop giving these people the benefit of the doubt. They are not stupid, at least not the ones that truly matter. They are not misguided. They are not simply mistaken. They are intentionally malicious. It is not the naïveté of bleeding-heart liberals who get teary-eyed at the thought of punishing violent criminals that have caused the ruling regime to empty prisons and violent crime to exponentially increase. Yes, the naive liberal useful idiots who give them power are easily deluded by propaganda, but those who wield power know exactly what they are doing. They want the people they hate to be punished. They want white women and their babies to be run over by violent criminals who never should have been let out of prison. They want violent criminals to be released back into the wild, they want police to be terrified to fight them, and they want you to go to prison if you ever have to defend yourself against them. These are not accidents caused by well-meaning-but-naive libs—this stuff is by design.

“Climate change” is no different. For his entire presidential campaign, Joe Biden read carefully crafted scripts about reducing the use of fossil fuels, cutting oil production, increasing “clean energy,” etc. That the cost of gasoline is nearly triple what it was when he took office is not some accident of the inscrutable forces of the free market. The people who rule the American people want gasoline and diesel to be unaffordable for most of the country. Regular people—with jobs and families and mortgages—those people are the enemies of the regime. They want things to be more expensive for you. They want you to suffer.

They not only don’t care if you are impoverished, but it also brings them sick pleasure. You are their enemy. They want to destroy you. This should have been evident during the Wuhan Flu, the Mostly Peaceful Summer of George, and the Most Secure Election in History. What were those events, in truth? Whether you believe those events were 100% organic or they were operations of alphabet agencies and aligned NGOs or (most likely) some mixture of both, it doesn’t matter. What matters is both who benefited from these events and who was harmed. Who benefited from the lockdowns? Megacorporations, especially trillion-dollar hedge funds like Blackrock, which got the overwhelming majority of newly printed trillions (while you got a couple of tiny checks). In short, the greatest constituency of the regime benefitted from everything that happened in 2020. Every industry got hundreds of billions for almost nothing, Big Pharma got a huge boon, and the military-industrial complex now likewise gets to cash in on an absurdly expensive (even by War on Terror standards) proxy war with Russia. Everyone who was already filthy rich got even richer, all at your expense. Wall Street, Big Tech, Big Pharma, and especially billionaire retailers like the Waltons and Bezos raked in the dough while their competitors were shut down.

And who was harmed by the events of 2020 (and beyond)? The greatest enemy of the regime, that’s who: the middle class, the people who have spent their entire lives toiling away to build businesses that provide services and goods and jobs for their neighbors, who donate to the things that make their communities worth living in, churches, local sports teams, youth activities, and service organizations. The regular people who have a stake in the places they live, who love their country and their neighborhoods, who want to live in peace and quiet, who simply want good order. That is who the regime hates the most. The few Norman Rockwell Americans who have the audacity to still exist. The regime was happy to allow your businesses to be locked down, while their billionaire friends could stay open. The regime was happy to allow organized violent revolutionaries to burn down your neighborhoods with almost no arrests and no investigation into the machinations behind the scenes. All of this while spending years holding men without trial in solitary confinement for walking through wide-open doors to the U.S. Capitol and spending years investigating an understandably overly exuberant protest of a fraudulent election. You need to filter everything that happens today through the friend/enemy distinction and politics becomes absolutely crystal clear.

This is why it cost so much to fill up your car and your grocery cart. The people in power hate you and your family. They are stupid and incompetent, but even worse, they are malicious. If you are a normal person, who just wants to have a job and home and family, who loves his country and loves his God, the people in power do not want you to exist. They want to make life as hard as possible for you. They do not want you to have children. And if you somehow can even have children, they want the children you do have to be groomed into disgusting freaks. You have an enemy that hates you. Do not ever forget it.

But you also have friends. The good news is that more and more people are starting to see they no longer live in the America they grew up in. More people are beginning to see that the America of “at the end of the day everyone is an American on the same team and we just disagree about some things” is dead. And while this is a great tragedy it is a necessity. We have to realize the thing we love is gone before we can begin to bring it back. And many people are now beginning to have that realization.

This is the very first step in things being made right again. Now you can organize around this principle, knowing who your friends are and who is on your side. From there you can build churches, build neighborhoods and towns, build communities dedicated to rebuilding Christian civilization, communities that will have the strength to weather together the difficult years to come. One in which you can recognize who your friends are and who your enemies are, only then will you have the ability to fight and build.