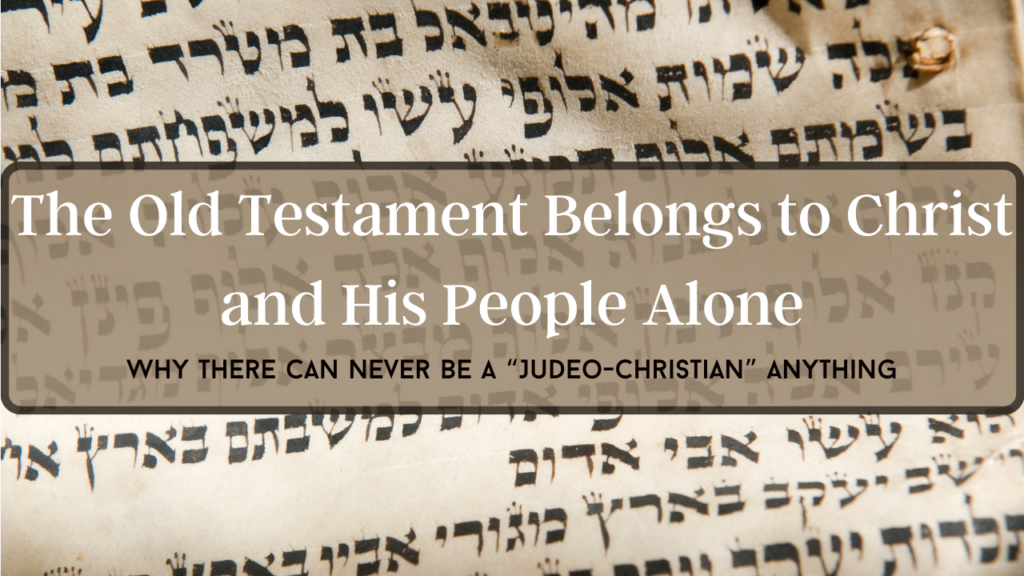 To start, we should back up and understand some grand themes of the Bible. Right after God dispersed the nations at the tower of Babel (Genesis 11), He called a descendant of Shem to go to the land of Canaan (Gen. 12). He then made promises to this man, that he and his descendants would possess this land (Gen. 15), and that this promised seed would come through Him (Gen. 17), and they were instructed to keep a special sign of this promise in the act of circumcision (v. 10-14). However, this man Abraham and his descendants were not the only people who believed in God.

Throughout the Old Testament, other people also knew of our God, either by the faith passed down from the time of Noah or through the ministry of Abraham’s descendants. The entire time you had both the priestly people, through whom the promised Messiah would come, and also believers within the nations of the world such as Melchizedek (Gen. 14), Jethro (Ex. 2), Rahab (Josh 2), the Queen of Sheba (1 Kings 10), Naaman the Syrian (2 Kings 5), the people of Nineveh (Jonah 3-4), and Nebuchadnezzar (Daniel 4). Throughout the Old Testament, there are believing Gentiles.

By the time you get to the New Testament, Jesus and the Apostles are constantly bumping into Gentile God-fearers (Matt. 15:21-28; Luke 7:1-10; Acts 10; Acts 13:26; Acts 17:4, 17). That division, between Jew and Gentile, was coming to a close with the ending of the Old Covenant order. By the time of Pentecost (Acts 2), after Christ’s resurrection and ascension, the Babelic order is reversed and the Jew/Gentile distinction is torn down. The nations all have one tongue again, the confession that Jesus Christ is Lord. The nations not hubristically building a tower to the heavens but instead, bowing before the one who has ascended into heaven and thereby exalting His holy name.

The union of Jew and Gentile into the church is perhaps the main theme of the New Testament. It is unquestionably the main theme of the Book of Romans. Many people read Romans as though it is primarily a theological treatise. Still, the theology of the Apostle Paul’s epistle to the Romans is an outworking of the issue of Israel and the Gentiles being joined into one body. Paul gives a defense of the justice of God. He goes on to write about how God would harden the hearts of Israelites so that they would demand the murder of Christ and thus bring about the salvation of the entire world (Rom. 9-11).

By the time he gets to chapter 11, he explains the union of Jew and Gentile as the covenant people united in Christ (Rom. 11:26). He also tells of a future conversion of Israel before God brings judgment down upon the Old Covenant order and Babylon the Great which is Jerusalem (Rev. 18). Just as Paul prophesied, there indeed was a mass conversion of Jews right before the Romans came to destroy Israel (Rev. 11:1-13, 14:1-20). God used His salvation of the Gentiles to provoke the full remnant of Israel to repent and believe in the Messiah, just as Paul said He would when he said, “and so all Israel will be saved.”

“All Israel” is the full sum of the Jews who confessed Christ before God sent the judgment upon Jerusalem — prophesied by Jesus in Matthew 24 and revealed in the Book of Revelation. Covenant-breaking Israel and its leprous temple were destroyed. Faithful Israel, united by the faithful Israelite Jesus Christ (the heir of all the promises given to Abraham, Moses, and David) was also joined to the Gentile believers.

Far from being a “replacement” for Israel, it is a fulfillment. No one would say that a family with five natural children that adopts a baby is “replacing” the natural children, even if one of the older children ran away and disowned his parents. The faithful remnant of Israel, the true Israel was preserved. It was joined to Christ along with Gentile believers. When God sent the Assyrians and Babylonians to destroy covenant-breaking Israel and Judah, centuries before Christ, no one would ever think to say to the idolaters being destroyed, “don’t worry guys, all those promises God made to Abraham are irrevocable! You’ll be fine!” No, the prophet Jeremiah told them explicitly not to look at these promises to protect them from the consequences of their disobedience:

The promises are irrevocable to Israel, and Israel is defined in terms of the covenant with God. That covenant directs Israel to join with His Son, and if Israel fails to do it, they are no different than their fathers who God destroyed and sent into exile for their idolatry. Yet, God preserves a remnant and His covenant and its promises remain intact. That is the point of Romans 11.

What about Jews today?

It is impossible to overstate the importance of the historic cataclysm that was the Destruction of Jerusalem and the Temple in 70 AD. That was God’s conclusive, final judgment on the Old Covenant. It is over. No more sacrifices only The Sacrifice. His covenant and His promises exclusively belong to the true Israel, Jesus Christ. There was no more priesthood, only the True High Priest, Jesus Christ. The only thing that remained was the traditions of the scribes and the elders, the very traditions that were crafted to allow Israel to violate God’s Law, the very traditions Christ demanded Israel repent over, and the very traditions that provoked them to reject Him and put Him to death. That is what modern Judaism was formed out of. This was not a correct understanding of the Scriptures, because if they truly had the eyes to see, they would have comprehended the majesty and divinity in Christ Jesus!

So the claim that “the Old Testament came from Judaism” is patently false. Judaism is a new religion created after the Old Covenant was destroyed. It is a faith that is built out of the codified traditions of the elders that Christ forcefully condemned. The faith of Abraham, Isaac, Jacob, Moses, and David is the faith of Jesus Christ and Him alone. The Old Testament “belongs” to the cult formed after Christ called “Judaism” as much as the Bible “belongs” to cults like the Jehovah’s Witnesses or Mormons. Modern Jews today are no more “God’s chosen, special people” than Muslims or Buddhists. That faithful remnant of Israel united to Jesus Christ are “God’s chosen, special people” not the branches that have been grafted out of the olive tree. Modern Jews are not “Old Testament-only pre-Christians.” Judaism today is a modern LARP religion, no different than guys who dress up and howl out in the woods to Odin and Thor.

If the church were to understand this—that modern Ashkenazis and Sephardi are not “the special people” but no different than Ghanaians, Koreans, or Brazilians—we may actually be able to evangelize them effectively. They are not the special people that don’t need Jesus. Their religion is fake and a bad joke. It is a false religion like all other false religions. Only repentance and faith in Jesus Christ will save them. Far from being “antisemitic,” a proper understanding of this shows heartfelt concern for their souls! If you have the compassion that a Christian must-have for the lost, you need to understand that their religion is not “just like ours but without the New Testament.” If they reject Jesus, they reject the Old Testament that is all about Him. All mankind need to believe in Him or they will perish in their sins.

This is why “Judeo-Christian” is such a problem. Judaism is a new, made-up religion by those who rejected Jesus Christ. It is not the precursor to Christianity; it postdates it. By using that term we are reinforcing the idea that their religion is just like ours except they don’t believe in Jesus yet, when in reality it is a new religion formed out of the total rejection of the Son of God. The very best thing the church can do for modern Jews is to heighten the distinction between Christianity and their false religion. Only then can they come to know salvation in Christ.