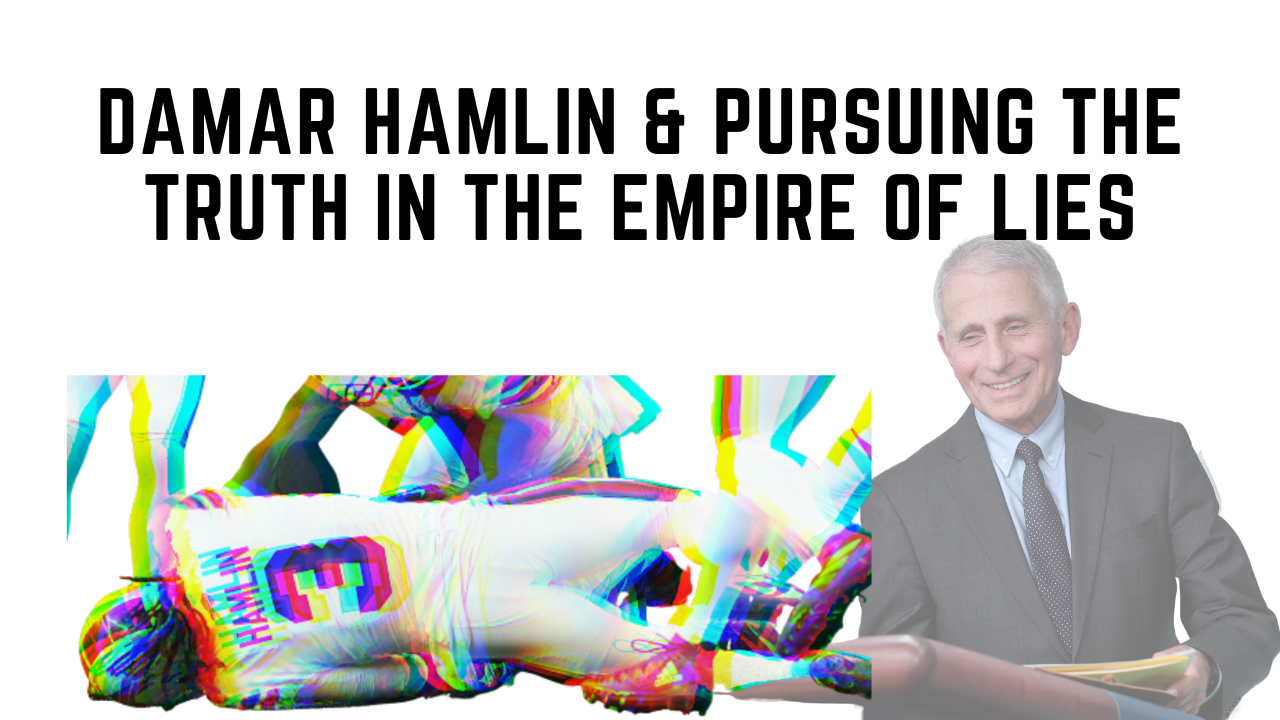 Damar Hamlin and Pursuing the Truth in The Empire of Lies

On Monday night, in the nationally televised game between the Bengals and the visiting Buffalo Bills, Bills safety Damar Hamlin was hit as he tackled Bengals receiver Tee Higgins. After the play, Hamlin popped up, adjusted his helmet, then suddenly collapsed backwards to the ground. First responders applied a defibrillator to Hamlin and then performed CPR for 9 minutes, as players from both teams gathered to pray for him. His heartbeat was restored and he was transported to a nearby hospital.

The violence of the hit was unremarkable for an NFL game. There are dozens of plays a game at least as brutal as the Hamlin-Higgins tackle, in hundreds of games a year. Never in 103 years has an NFL player suffered cardiac arrest after taking a shoulder pad to the chest. Immediately, before a single physician had even examined Hamlin, the memo went out: the only possible explanation for this is commotio cordis, an extremely rare condition caused by a blow to the chest within a precise, 20-millisecond window. Out of the millions of people who play contact sports every year, there are only about 10-20 incidences of this freak event, almost all of them in children under the age of 18. Never has this happened to the grown men in the NFL, either in a game or on the practice field. And, apparently, commotio cordis responds well to defibrillation, which was unsuccessful in Hamlin’s case.

It appears very likely that something else was the cause of Hamlin’s cardiac arrest, and there is a hundred-billion-dollar-plus elephant standing right on the 50-yard line. The NFL is very proud of its role in the propaganda push to inject every American with mRNA gene therapy. They boast of the high injection rates of players (and their requirement of all other staff to be injected), and happily demonized holdouts like high-profile quarterbacks Kirk Cousins and Aaron Rodgers. In the case of the former, his (now-fired) head coach publicly vilified him and brought Fauci-clones in to regularly harangue him. In the case of the latter, who had been one of the media’s most-beloved stars, he became public enemy number one in the sport. Rodgers’ interviews on Rogan, where he persuasively demonstrated clear thinking and sharp logic on the forbidden subject of the mRNA injections only inflamed the wrath of every midwitted, neck-bearded sportswriter and fan who collectively foamed at the mouth over Cousins’ and Rodgers’ blasphemy of “The Science.”

What was the fear of Rodgers’ and Cousins’ (and millions of Americans) over the mRNA injections? That the potential for serious short-term and long-term health problems on a product rushed into production in less than a year was far too high, much less for someone who was at almost no risk of death or serious illness from the Covid-19 bioweapon. For anyone with no co-morbidities, such as elite athletes, it made absolutely no sense to take an experimental medical treatment with unknown efficacy and unknown side effects for a disease that poses almost no threat. It was very simple, very obvious logic. And time has only vindicated all those who refused. And the terrifying Hamlin incident just might be vindication before tens of millions that cannot be ignored.

Of course, the odds we will ever see a report stating “Hamlin suffered vaccination-induced myocarditis which was the underlying cause of his cardiac arrest” are lower than you personally suffering commotio cordis—almost zero. The NFL, one of the single-most important propaganda arms of the entire regime, is in a difficult position. They will have to either 1. admit their pushing of the mRNA therapy has made 95% of their players a ticking timebomb (never going to happen), 2. Their world-renowned medical staff completely missed a congenital heart defect in a million-dollar elite athlete (also highly unlikely), or 3. Tell tens of millions of moms and dads that their little boy could also have his heart stopped if he gets hit the wrong way playing this game (the option they have chosen thus far). That they would rather suffer such extremely bad PR for a game that is already facing increasing levels of scrutiny over the safety and health of players, tells you just how important the propaganda over the “vaccines” is to the Regime.

Of course, we are unlikely to ever know the truth of what caused Hamlin’s heart to stop. The one-in-many-millions odds of commotio cordis is a plausible explanation if you want what happened to Hamlin to be anything other than the medical experiment you took part in. The typical American consumer of ProductTM doesn’t care about the truth, he wants to be entertained, and he would rather be lied to while he is robbed, maimed, and dispossessed. This explains the unfettered rage provoked by discussing the possibility of the mRNA experiment and Hamlin’s cardiac arrest. The aphorism attributed to Mark Twain is as true in 2022 as when he (allegedly) first said it: “it is much easier to fool someone than it is to convince them they have been fooled.”

But for those few who do want the truth, the past few years, if not earlier, you have by necessity developed a heuristic of suspicion. This is very wise. If you know someone personally who has lied to you repeatedly, you would be foolish to completely trust any claim they make. The same logic applies to institutions that have repeatedly lied to you about nearly everything: the origins of the Covid-19 virus, the necessity and efficacy of lockdowns and masks, the danger and supposed ineffectiveness of hydroxychloroquine and ivermectin, the Russian collusion hoax, the “mostly peaceful” BLM riots, “the most secure election in history,” “the most appalling violence on American shores since the Civil War,” the January 6 U.S. Capitol Protest, and the “totally safe and 100% effective Covid vaccines.” All of it has been nothing but lies. Absurd lies. Lies the Soviet Union wouldn’t even dare to tell the peasant slaves it ground into dust.

In this context, we have the Hamlin cardiac arrest. It is possible that it could be what they are saying it is. Even if the odds are astronomical, it is of course still possible. But at a certain point, the odds become so low that alternative explanations become more plausible to reasonable people. On the morning of September 11, 2001, after the first plane crashed into the World Trade Center, it appeared that despite the extremely low probability of something like this occurring, there had been a tragic accident. After the second plane hit, the odds of it not being intentional became so low you would have to use scientific notation and numbers that have never been named to quantify the probability. If there is a second or third cardiac instance in the NFL over the next season or two, it will be impossible for anyone to believe there is now an epidemic of commotio cordis. That is obviously not anything anyone is hoping for, but it is the only way there can be any certainty about this for all of us who live in the Empire of Lies. We are forced to assume we are lied to about everything, and you do not need to apologize for connecting the epidemic of heart issues among young, healthy 20-year-olds and a 24-year-old elite athlete’s heart-stopping on live national television. If the mRNA injections are killing people, they will not be able to cover it up forever, but after witnessing the reaction to the possibility that Hamlin’s heart-stopping might be related to the shot, many, many more young healthy people will be sacrificed at the altars of Science and Mammon before justice is done.