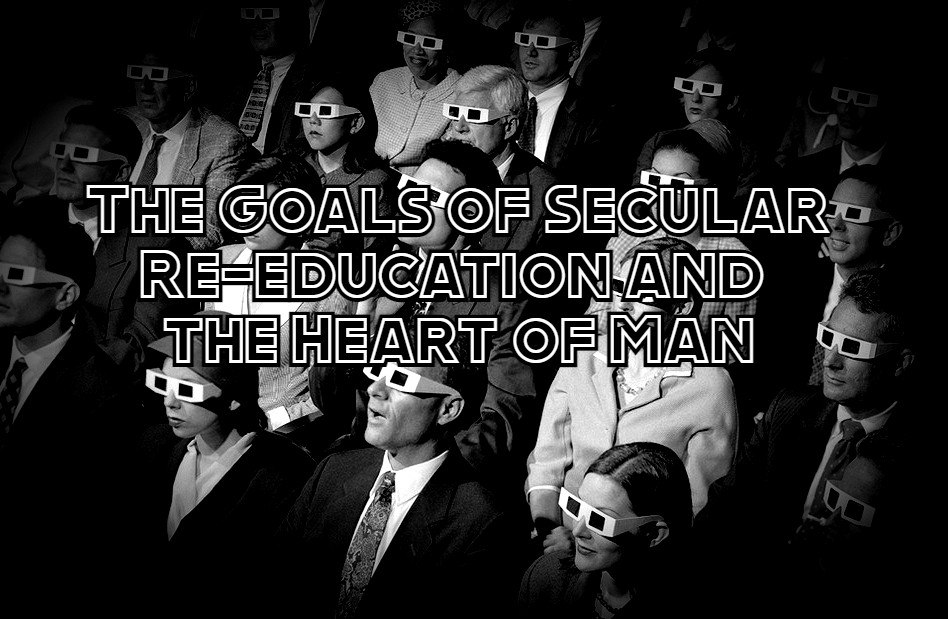 The Goals of Secular Re-education and the Heart of Man

The secular world seeks to dull and desensitize the heart. It fears living hearts, full of grace and love for Christ Jesus. It does not fear the pseudo-jesus of modernity’s spineless ecumenism. In fact, such a pseudo-jesus is actively promoted. It only serves secularism’s goal of a heartless religion, one imprisoned in the flow of emotions that have not been purified of the passions.

A heart that is not undergoing purification in Christ is easily manipulated by the false appeals of compassion, unity, care, and tolerance that the secular world makes. Men will give their hearts to something. Thus, we witness around us an immense battle for the hearts and minds of people. What will educate and inform our hearts and minds?

For the Christian, we must be founding our hearts and minds on Christ. This first and foremost is a way of life, for Christ Jesus is Life. We are gifted a vast treasury of testimonies from the saints by which we are able to qualitatively gauge our observing of, and walking in, the way of Christ. We have the Scriptures and the writings and lives of the saints.

The fallen world is constantly seeking to undermine this life in Christ. It seeks to deviously “re-educate” people, most of all Christians. It seeks to convince Christians to accept an anti-gospel. Thus, we must diligently be educating our hearts in Christ alone. Only through Him will we safely navigate the storms of our times.

In the wonderful book “Saint of the Prison,” which is primarily about the holy New Martyr Valariu Gafencu, there are two excellent analyses by Fr. Ciprian Gradinaru. One at the beginning of the book and the other at the end. His expose on the goals of modernity’s “re-education” is of the utmost importance for our times. Some may have read the book; it is, in my opinion, a must-read. But some may have not, so below I provide an excerpt from his keen observations.

I believe it will be self-evident to the observant reader just how much Fr. Ciprian’s insights apply to our own day and situations. Yet, I have read around enough to know that his insights are not his alone. They indeed harmonize with other solid Orthodox voices, even those of saints. Let us indeed take heed.

I will briefly note the great importance of comprehending secularism’s goal of replacing Christ through “re-education,” which Fr. Dimitry addresses. For Christians, this is vital to digest. We will be offered a “christ,” but a different christ. It is subtle.

Surveying the past few years, one may observe that even in Orthodoxy novel modes and restrictions were introduced that influence the ethos and manner in which people approach Christ the Lord. These modes also influenced how persons interacted with other persons. Such modes inevitably influenced the manner of thinking about the holiness of the Church and the Mysteries, and thus Christ Himself, for the Church in Her reality is His body. Is it possible that a re-education was and is taking place? Although for many it may have been unintentionally and unwittingly facilitated. Through certain novel and material expressions were (and are) Christians being subjected to a sort of re-education?

Much has taken place and although a seeming retreat, thankfully, is transpiring, the psychological (in the true sense of the word) effects will be felt for years.

It is also important to grasp that it matters not to the spirit of this re-education which sociopolitical system it employs; it is willing to utilize each of the seeming dialectical opposites – Communism and Capitalism – to advance itself.

May we guard our hearts in the way of the Lord and keep them from being “re-educated” according to this fallen world and its pseudo-christs. Sadly, not a few Christians have adsorbed the “re-education” and are working even from within Orthodoxy to promote it as a “new way,” a new and more “enlightened orthodoxy.” Such are false prophets.

The ultimate goal of the communist ideology was the creation of a “new man.” The communists believed that re-education was the only way to accomplish this …

However, one who studies the communist re-education in depth cannot but acknowledge the following evidence: the same principles of re-education are applied nowadays, though in a more disguised and perfidious manner. This ideology, which highly influences and governs the present society, is characterized by the same spirit of antichrist as the communist ideology. The goal is the same, only the means are different. Valeriu’s dearest friend, Ioan Ianolide, already noticed in 1985: “The one who is willing to see, can identify the re-education process all throughout the world, as well as the dialectical materialism, the atheistic, the immoral, the decadent and the repellent remolding.

This was predictable for people endowed with spiritual understanding. When Communism reached its climax and nothing seemed to be able to stand in its way, Valeriu said, “Communism will perish, but what is essential is what will take its place.” In the 1980s Ianolide wrote: “I feel that in the foreseeable future, the powers of Communism will be annihilated, yet I remain sad and worried.” Sad because he can see that the same individuals responsible for unleashing Communism upon the country2 are now turning into the masters of the coming world; worried because he foresees the perspective of a worldwide dictatorship, without opponents and without precedent.

If we consider Ianolide’s prophetic words, we can see that our own world resembles a prison more and more. He said that this is an imprisonment that is tougher than what they had to endure because now only a few people are aware of the totalitarian ideology and the anti-Christian way of life, which is slowly conquering the world. Released by Christ for scrutiny, darkness reigns (Luke 22:53). Nowadays our prison cells are guarded by our own passions, fed and cultivated by a consumerist society.

In the communist prisons, torturers used all resources available to force prisoners to deny Christ. Nowadays, rejecting Christ is done voluntarily, as people are seduced from an early age to embrace a lifestyle which is opposite to the one to which Christ calls us. In prisons, torturers were trying to prevent every person from having any kind of privacy or moments of prayer. Nowadays, people voluntarily surrender their own privacy in favor of TV, Internet or anything which might steal their serenity and opportunity to be alone with Christ. Torturers did everything in their power to keep the prisoners away from their own families and to get them discouraged for an easier control over them. In present times, divorce has become a lifestyle.

The spirit of “re-education” is the same – both in Communism and in Capitalism – that is to say, it is characterized by a rejection of faith in God, by the giving up of traditional moral values, and by selfishness, pride, betrayal, and cowardice. This is the Spirit of Antichrist. The methods used are just slightly different: if during Communism, they wanted to obtain “the new man” through force, through demolishing and closing churches and monasteries, and through torturing of killing opponents, in capitalism, the methods used are “softer” and can slowly seduce even those who, under obvious Christian persecution, would have confessed and become martyrs.

In essence, re-education has two main goals. First, the removal of God from people’s consciousness, the reshaping of people’s way of thinking, so that man’s heart becomes insensible to God’s grace, incapable of true and profound feelings. Man is thus condemned to live in a superficial manner, not only physically, but also spiritually and culturally.

Second, achieving the perfection of the “new man,” modeled so that the Devil can easily take possession over him or her. Such a man would be ready to receive Antichrist and enthrone him in the “holy place” (Matthew 24:15). that belongs to God at the end of times.

An important clarification is needed in this context: the correct translation of the word “antichrist” is not “against Christ” but “in place of Christ / replacing Christ.” In other words, the enemy no longer confronts visibly and directly Christ, but he seeks to take His place, to remove Him from people’s consciousness, to neutralize people’s discernment and their capacity to choose freely.”