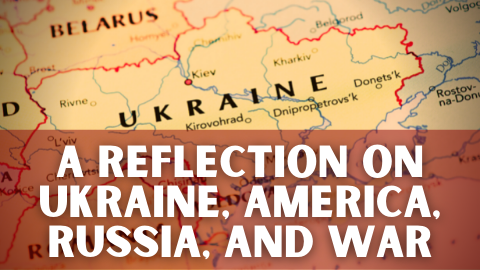 Could it be that the assault on the spiritual peace of Ukraine has affected its physical peace?

How many Americans have been aware that there has been an effective civil war in eastern Ukraine since 2014? How many of us were concerned when Ukrainians were shooting at and killing Ukrainians? Was that okay?

As an American, I will speak to my country. I’m not in Russia. I don’t support the attack. But, we, as Americans, should ask ourselves – is Russia doing anything much different than our own country has done? When in the 21st century alone have we “respected” other nations’ sovereign borders? (Look at our southern border at current!) At the end of the 20th century, it was a US-led NATO that dismantled Yugoslavia. New borders, created by the US and friends, were established. These borders served US interests. Let us look at the Middle East, when did we respect borders there? The US has stated and acted upon the notion – if a leader is deemed bad and against “freedom and democracy,” it is a duty to overthrow such a leader and carve up the country as the Western powers see fit. When we do it, it is “good.” When Russia does the same thing, it is bad. (Again I’m not justifying anything, I’m making an analogy.) The US government is the epitome of the pot calling the kettle black, as are most of the European powers. Let us as Americans reflect that in this century alone our government waged almost none stop war since 2001. The US government has been in conflict with some countries or states for two decades. If we go back and count the years starting from the end of World War II, the number of years of war or conflict involving the US government is much more than the number of years with no conflict. And we are going to lecture the world on peace? All that to say, we are guilty of the very things we accuse Russia of doing. I guess that is called hypocrisy. The finger we are pointing at Russia is dripping with blood. Maybe we should wash our own hands first.

I’m an American. I honor my country, but I do not support the agenda of war and violence driving much of foreign policy. I’m very grieved by it. Let us take care of our own house first. As in many places, I do not think the government always reflects the people. I think most people want peace and to live their daily lives in calm. Sadly, there are many in power who are hell-bent on stirring up conflict and trouble for the world and people at large. We should also realize that US foreign policy has also played a role in cultivating the current events in Ukraine.

I think that a part of what is transpiring is the typical distraction tactic. The Covid crisis has revealed that the “free” West is not as “free” as it claims. Many Western countries went full dictator mode, thus revealing their true colors. Oh, yes, of course, to keep us all safe because they care for us from their million-dollar mansions. America is in deep crisis and turmoil, much of it fed by certain agendas that are actively seeking to encourage fear, hatred, and division. Our own house is tumbling and corroding away. Oh, but look! That dastardly Putin! He’s a new Hitler. I guess it takes one to know one. In America, the attempt is being made to distract us again. And yes some are insane enough to pursue a war with Russia to do so. I don’t know how far the events will go, but I do know from history that war is a great distraction and even a wonderful tool for “rebuilding” the world.

Of course, one could wander down the labyrinth of geopolitical agendas. I’m familiar with a number of them. I won’t do that right now. The historic discrimination of the Western world against Orthodoxy could be noted as an aspect also. But that is a big subject.

In closing to this my few thoughts, I will return to the spiritual aspect.

What can we as Christians do? Repent. Russia, for all its problems, is not our enemy.

I think we have a lot we need to work on.

My heart breaks for the people of Ukraine. I am praying. I have friends and family there. What is transpiring there is not a “Russian” problem, it is an “all of us” problem. Welcome to a globalized world. As Orthodox, we have for the most part passively allowed the spiritual crisis in Ukraine to fester, hoping that if nothing is really done it will just go away. That has not happened. The bitter fruits are just growing. The world will only grow what men sow into it. If we do not like the fruit, then we must be careful of what we are sowing.

May our Lord truly grant us peace. May He, through the prayers of His Most-Pure Mother, soften the hearts of evil men.

I have been working on another rather large article, which is close to being ready to publish when world events took a sharp turn. I will be posting the other article soon, but a number of people have reached out to me for my thought on what is transpiring in Ukraine. For whatever my thoughts are worth, I’m sharing a few of them in this post.