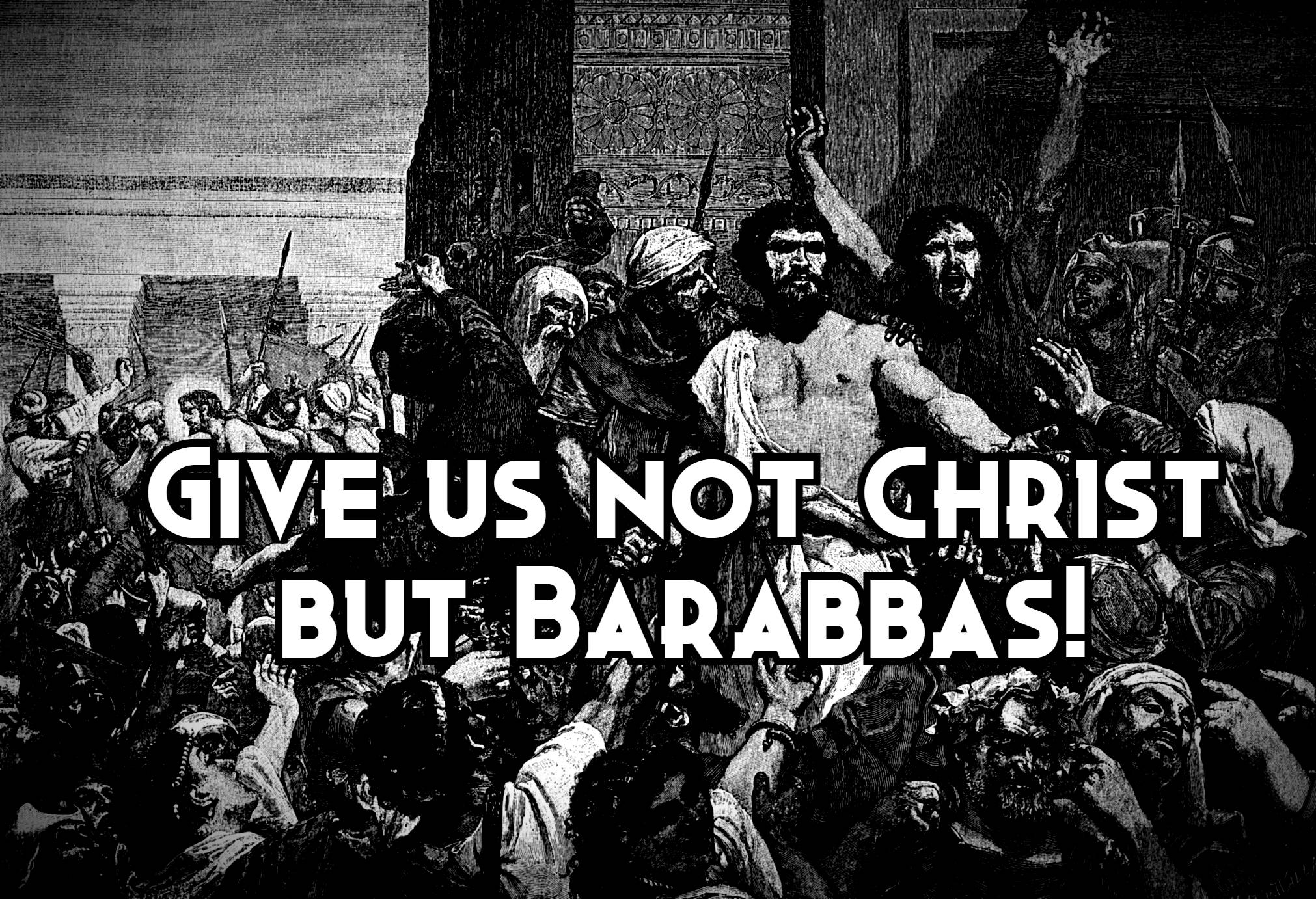 Give Us Not Christ But Barabbas

Life, Light, Freedom, Truth Himself is revealed to the world and yet many encounter the revelation of Eternity, of the very Divine One, and shrink back into the shadows of fallen human distortion. There, in the murky shadows, humanity may comfort itself with self-affirming platitudes.

“The light has come into the world, and men loved darkness rather than light, because their deeds were evil” (Jn 3:19). In the darkness, evil movements and blindness caused by sin may be declared light by fallen man. Evil may be called good. Thus, in this case, darkness is taken for light. True light is rejected because it causes a painful exposure of the true state of humanity and persons.

To justify existing in darkness men gather to themselves voices that will confirm their wandering lusts and desires. “The time will come when they will not endure sound doctrine, but according to their own desires, because they have itching ears, they will heap up for themselves teachers; and they will turn their ears away from the truth” (2 Tim. 4:3). Men become willing slaves to their desires and seek to find prophets who will confirm and condone their love of self-infatuation.

And so, from the darkness, which men claim is light, and which produces a lying vision, they begin to “speak from the deceit of their own minds” (cf. Jer. 14:14).

The human mind and spirit can only be free when it transcends the limitations of their fallen reasoning. The human mind must be healed and then begin to ascend and encounter that which is Eternal and Divine. Then, from a place of timeless transcendence, untouched by the corruption of fallenness, truth may be spoken back to the confines of created limitations. “For the testimony of Jesus is the spirit of prophecy” (Rev. 19:10).

Any voice which does not seek to speak from the limitless reality of revealed Truth and eternity is a false prophet. For such a voice takes as its guides the corrupt and fallen system of darkness to which the world, in its rejection of Light and Truth, is inevitably subjected. Such a one cannot perceive things as they truly are, for such a one sees only with eyes consumed with darkness.

Thus, like the Hebrews of old, each person is (and even groups of persons) confronted with a choice between Barabbas or Christ Jesus; to receive either a false prophet or the only true Prophet. St. Symeon the New Theologian teaches that Barabbas was a type of the antichrist, who is the epitome of a false prophet.

Fallen humanity loves false prophets for they confirm it in its wandering desires. It believes that such ones will help it to preserve and even make real the evanescent substance of darkness, which it chooses as its dwelling place through its rejection of light. Fallen man strives to establish darkness as the only reality. Thus it seeks the destruction of all those who would expose humanity’s self-inflicted desire to abide in fading darkness. Intoxicating itself with the words of false prophets, who are but robbers, it seeks to destroy Truth, and any who seek to speak of Truth. For Truth, it believes, will deprive it of its elusive and illusory place of power.

The false prophets cry out, “to preserve our authority we must do away with this Jesus Christ!” “Crucify Him! Crucify Him!” And the greatest tragedy is – such cries come not only from those of the world but also from those, who like the Hebrews of old, are called by the name of Israel, those called to be the assembly of the Living God.

Any who desire to follow after Jesus Christ must be willing to suffer. For to be a follower of Christ means that such a one must be willing to participate in the true Spirit of prophecy. And thus, each is called to “count the costs.” For it is abundantly clear that a person who speaks from the Truth will be, as it is written, rejected by this fallen system of the world. “Of whom the world is not worthy. They [those who sought Truth and stood for it] were made to wander in deserts, and in mountains, and in caves and in holes of the earth” (Heb. 11:38).

The spirit of the world hates any who seek to free themselves from its bondage of gloom. It will hunt down those who it considers to be rebels. It even seeks to present itself as an angel of light while doing so (cf. 2 Cor. 11:14). For the “good” of all, it desires to keep everyone in the dark cave of fallen human ignorance.

And thus the true prophet may cry out, “For on account of Thee, we are being put to death the whole day; we were counted as sheep for the slaughter” (Rom. 8:36).

Such a person is willing to suffer all these things because he has tasted, even in some small way, of the good things to come. Moreover, he is confident that these words shall be fulfilled upon him, “Blessed are they who are persecuted for righteousness sake, for theirs is the kingdom of heaven” (Matt. 5:10).

Not so the false prophets. For them the preservation of earthly existence and worldly status takes priority. Their words speak to the lower impulses of mankind. They play upon the worldly cares, fears, and worries of people; thereby lulling them into a deadly sleep. They manipulate with fear and hold out the hope of comfort, but always just out of reach, just around the next corner. To reach it you must surrender and deaden just a little bit more of your conscience.

In such cases, sometimes, worldly cares and earthly pursuits are presented as virtuous. And thus, even in Christianity, a sad preference is promoted, one that seeks to preserve the strictly outward and institutional aspects while sacrificing the interior essential life. The freedom and dignity of Life in Christ is slowly strangled with the hands of compromise with the world.(This is not to imply a dichotomy, but rather that the exterior cannot live without true soundness of the interior, the heart. Thus, the exterior may seem to shrink and be despised while the essential nature of the heart is kept alive and even flourishes. But if the heart dies the exterior will also perish.)

The prophet Jeremiah reveals this about false prophets, “They invent futile visions for themselves. They speak from their own heart, not from the mouth of the Lord. They say to those who reject the word of the Lord, ‘You shall have peace.’ To those who walk according to their wishes, and to everyone who walks in the error of his heart, they say, ‘No evil shall come upon you” (Jer. 23:16-17)

True prophecy is “not of man,” rather it comes from the unchanging and eternal foundation of Revelation in the God-Man. It is not of this world. Conversely, false prophets speak according to the “wisdom” of this fallen age. They seek to sacrifice Revelation for the sake of momentary earthly stability and gain. They are not willing to suffer tribulations for the sake of righteousness and truth. Of such the Lord says, “If they had stood in My counsel and heard My words, then they would have turned My people away from their wicked practices” (Jer. 23:22).

Any who are willing to follow after Christ the Lord must be, in some way, willing to climb the stairs of Gabbatha and stand with Him as the deafening cry rings out on all sides from the mob, “Crucify Him,” Crucify them!

Those who speak from this fallen world will stand with the blinded masses, who seek to preserve their place. They will desire to receive Barabbas instead of Christ Jesus. They will urge people to exclaim, “We have no king but Caesar” (Jn. 19:16)! We have only the darkness of the fallen world to guide us and we desire not the Light of eternity! Those who long to preserve earthly prestige and status will always cry out for Barabbas. Let us not forget that it was not so much the Romans who called for Barabbas but those who were to be of the children of Israel.

“Look to yourselves, that we do not lose those things we worked for, but that we may receive a full reward” (2 Jn. vs. 8)

[I originally wrote this piece for issue XXVII of Death to the World. I modified it only slightly to re-post on my own site. I’m posting it on Forgiveness Sunday, 2022, and I’ll be taking a break during Clean week from most internet activity. Lord willing, I’ll have another post up sometime after Clean week. A blessed Great Lent to all!]

Proprietor and writer at the Inkless Pen Blog, at which, based on the foundation of the teachings of Orthodox Christianity, a wide variety of topics are addressed. Fr. Zechariah has translated some works by St. Dimitry of Rostov and New Hieromartyr Seraphim (Zvesdensky), these translations are also available on his blog.