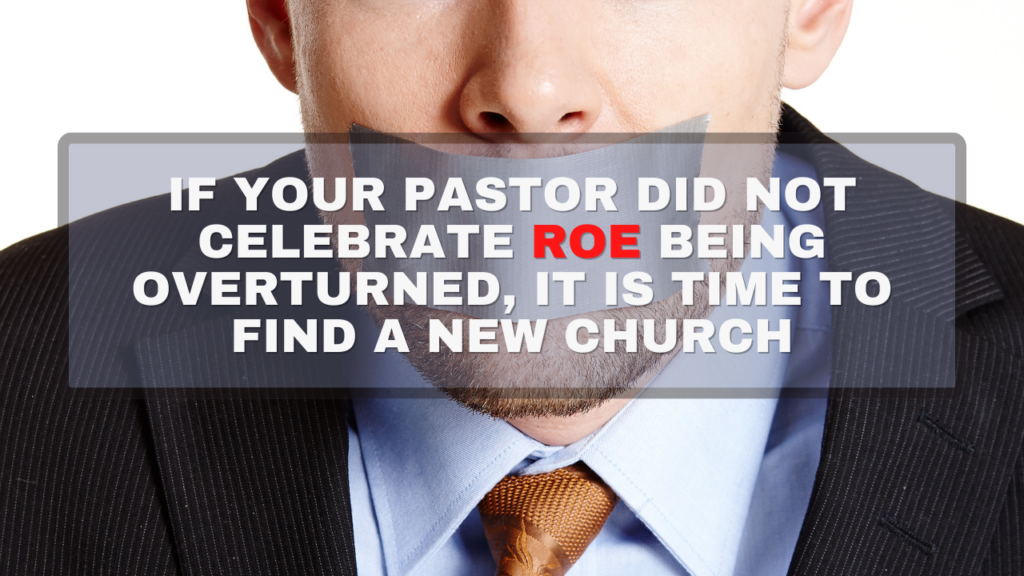 There are a number of purported reasons for this. Chief among them is the theological view among evangelical leaders that the church should never speak about anything “political” or sully its “witness” by preaching to the culture. Forget the fact that Jesus Christ is king of heaven and earth, reigning from the right hand of God the Father, and that therefore everything is under His authority—No!—the gospel is only about the individual sinner’s heart, and has nothing to say about how he is to live in the world, much less how he is to do things like vote! Hireling evangelical leaders will also point to “separation of church and state” as though the modern liberal understanding is 1. What the Founding Fathers of the American republic meant by the First Amendment’s establishment clause (they didn’t) 2. God’s Word nowhere requires God’s people or ministers to refrain from speaking about politics and culture anywhere. If Jesus reigns, and if the state is the minister of God, punishing wickedness and rewarding the good, as the Apostle says in Romans 13, then God’s people have something from God’s Word to say about it.

And this is not mere politics, either. This is not an argument over whether the top marginal tax rate should be 36.5% or 37%. This is about whether or not it will remain legal for a woman to have her baby dissected in her womb. This is about whether or not one million+ babies will be legally murdered again for the 49th year in a row. This is not trivial partisan politics, these are questions of public righteousness. These are things that Almighty God will judge entire nations over—and much of the church is terrified to even say one word about it!

And the reason for this, no matter what the theological justifications given are, is that so many of the leaders of the American church are utter cowards and people-pleasers. They fear men and not God. Some church leaders were not totally silent about the overturning of Roe but still they refused to rejoice and praise God for it and instead chided congregants who might celebrate, saying “we need to mourn with those who mourn” and “we need to be very sensitive and compassionate to those who disagree with us” and “focus now on pushing for welfare state initiatives to care for single moms and their babies.” It would almost be better if they had said nothing. Such people act as if the Jesus is Mr. Rogers and not the Jesus shown in the Gospels. That is the Jesus of the Psalms, like Psalm 94.

But these men deceive themselves into thinking their cowardice is Christlikeness. They pretend as if the sin of murdering your child, and severing the most precious and powerful human bond there is between mother and child, is no big deal and God just winks at it. They act as if this is not one of the most monstrous things possible for a person to do, that will rightly doom a person for all eternity if they do not repent of it. But by refusing to preach against the sin of abortion, whether by cowardice or sinful pragmatism, they are actually withholding God’s grace from women who desperately need it. It may not seem like it, but preaching against great evil, that causes great shame and grief by those guilty of it, is actually grace. Preaching against sin produces godly grief and godly grief produces repentance which leads to life. By refusing to preach against abortion, and by refusing to celebrate a great victory over it, evangelical leaders are withholding grace while patting themselves on the back for just how gracious they think they are. They would rather women still be in their sin but feel warm fuzzies about them than confront their sin and point them to the grace of God which is faithful and just to forgive them their sin and cleanse them from all unrighteousness—including the sin of murdering your child.

This reaction (and especially the total non-reaction) of the evangelical church to Roe being overturned is illustrative of the deep problems within evangelicalism today. Evangelicals and their prayers and action are the reason, humanly speaking, that this ruling happened. Yet our leaders are totally duplicitous, at worst, and completely aloof, at best. They desire the accolades of the New York Times, Washington Post, and CNN. They don’t want to be lumped in with low-status evangelicals they regard as white MAGA trash who want to ban abortion and are repulsed by sodomy. They are terrified of offending anyone because they think can simply nice their way into getting people who believe they have a right to murder their child to come to their church. Church growth strategies and marketing schemes dominate everything for these people. But what good is it to have thousands of people in your church if you are leading them slowly to perdition? The Lord will not measure success by how many rear-ends you put in seats, but whether you were faithful to His Word and His command to feed His sheep.

There is simply no other way to put this: the church leaders who have refused to give God glory for this great victory that will save the lives of millions are hirelings, not shepherds. They are men who are mercenaries, in it for a paycheck and will flee while the wolves devour the sheep. We are in a time where God is taking the world and shaking it up. He is revealing things that were once hidden. Men we thought were faithful ministers have turned out to be anything but. They gladly lock down their churches, they sit back idly as the biomedical security state attacks their church’s worship and their congregants’ businesses, and withholds their ability to feed their families without submitting to a dangerous medical experiment. After experiencing cowardice to that degree for more than two years now, we should not be surprised by their silence on the overturning of Roe. So if you are one of the many faithful Christians rejoicing over the Dobbs decision and your pastor has been silent, you don’t just have the right to find a new church, you have a duty to do so. There are countless faithful churches and pastors who gladly receive likeminded reinforcements and the encouragement to the boldness that you would be. Now is the time to go find them.