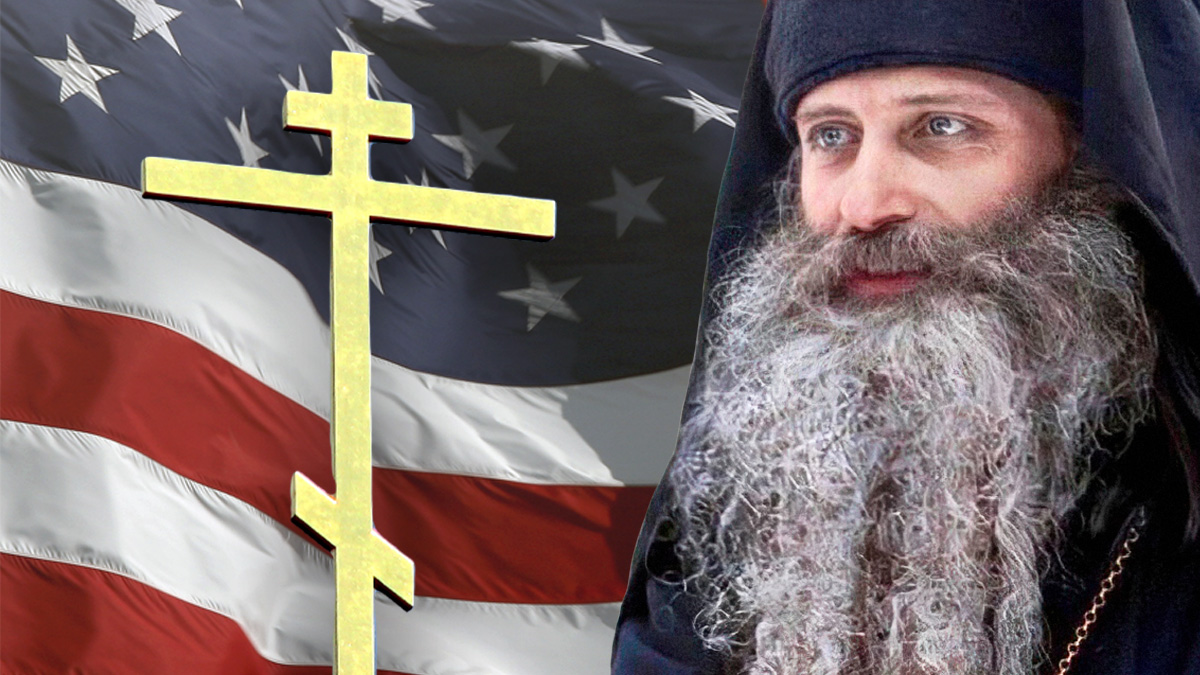 Fr. Seraphim Rose has inspired millions around the world toward one end: the pursuit of Christ without compromise. From his humble monastery in the mountains of Northern California, this Orthodox Christian priest, monk, and missionary, penetrated the heart of ancient Christianity and drew his fellow Americans into Christ’s Church. Having submitted himself fully to Christ, he became a pathfinder for those seeking solid ground amidst the ever-shifting sands of our American Babylon. Fr. Seraphim traversed the philosophical and religious landscape, from Protestantism to agnosticism, Nietzsche, Watts, Guénon, Buddhism, Lao Tzu, and finally to Orthodoxy. Ultimately, he found that Truth is not merely ideas, philosophies, or even a way of being, but a Person: the Lord Jesus Christ.

September 2nd will be the 40th anniversary of his repose, for which bishops, priests, and laymen will gather to celebrate the Divine Liturgy at his grave. Fr. Seraphim left an indelible mark on Orthodoxy in America, having devoted his life to bringing his fellow Americans into the Orthodox Church. His perennial message remains: “Everything in this life passes away—only God remains, only He is worth struggling towards. We have a choice: to follow the way of this world, of the society that surrounds us, and thereby find ourselves outside of God; or to choose the way of life, to choose God Who calls us and for Whom our heart is searching.”1

Some of the most salient points we can take away from his life include the following:

TRUTH IS A PERSON

Eugene Rose, later given the name Fr. Seraphim upon becoming a monk, was born in San Diego, California on August 13th, 1934. His parents were middle-class, Protestant Americans who supported their son’s intellectual abilities. While in high school, Eugene abandoned his Protestant faith after being persuaded by a rational, scientific approach to truth. During his undergraduate years at Pomona College, his pursuit of truth transitioned to one inspired by Chinese religious philosophy and values found in traditional world religions. At this stage, he had not written off Christianity entirely but had still yet to encounter the depth of spiritual life his soul craved.

While studying at the Academy of Asian Studies in San Francisco, a classmate encouraged him to investigate the Eastern, mystical side of Christianity. His first visit to an Orthodox church was at the Russian Orthodox Cathedral of the Mother of God “Joy of All Who Sorrow.” Eugene entered the peaceful, candle-lit church with the beautiful icons of Christ and His mother. Two decades later, Eugene described that evening: “[f]or years in my studies I was satisfied with being ‘above all traditions’ but somehow faithful to them…. However, when I entered an Orthodox church for the first time something happened to me that I had not experienced in any Buddhist or other Eastern temple; something in my heart said that this was ‘home,’ that all my search was over.”2

Eugene struggled greatly for the next few years to reconcile what he felt in his heart with the logic of his mind. He struggled to embrace the teachings of a single Divine Incarnation, a single way to salvation, and other “narrow” claims of Christianity. Gradually, Christ taught Eugene to realize the limits of his mind to come to a knowledge of the truth. It was the heart, the soul of man that must experientially come to this awareness. As he recalled later, “[w]ith my exposure to Orthodoxy and to Orthodox people, a new idea began to enter my awareness: that Truth was not just an abstract idea, sought and known by the mind, but was something personal—even a Person—sought and loved by the heart. And that is how I met Christ.”3

Growing up in America, the land of endless entertainment and unrestrained depravity, Fr. Seraphim experienced early in life the empty promise of prodigal living. In San Francisco during the mid-1950s, Eugene found himself part of the intellectual elite. With a limited income, he indulged in gourmet food and fine wine, attending operas and art exhibits. However, as one seeking meaning and true spiritual life, his conscience did not leave him at peace overindulging in worldly pleasures.

When Eugene became Orthodox in 1962, he embraced the ethos of voluntary suffering for the sake of Christ and the purification of his soul. Seven years after his conversion, he moved to Platina, California, an old miners’ town 200 miles north of San Francisco, where he could realize his God-given calling to be a monk. Here, he and his co-laborer, Fr. Herman Podmoshensky, established the St. Herman of Alaska Monastery. Living in the wilderness, Fr. Seraphim’s soul soared as he embraced the difficult life of a monk.

Imitating the monastic saints, he slept on old wooden planks in his 10’x10’, hand-built cell, diligently followed the monastic rule of fasting, and worked long, often physically grueling hours around the monastery grounds, everywhere from the garden to the print shop. Fr. Seraphim knew experientially how pushing himself to offer everything he had to God and his neighbor not only helped others in their spiritual journey but that Christ drew closer to him, providing him the strength to do His will.

This way of living opened the door to God’s grace in his life. “In suffering,” Fr. Seraphim observed, “something goes on which helps the heart to receive God’s revelation.”4 A man who desires Christ above all else will learn that voluntary suffering is the path of spiritual growth.

THE SPIRIT OF ANTICHRIST

In His great love for man, our Lord Jesus Christ revealed the sober reality of the end of the world. Following the Lord’s example, Fr. Seraphim labored in sharing the wisdom of the Church with his fellow Americans, not to appease their juvenile curiosities, but for the sake of their repentance and spiritual watchfulness.

He gave lectures during summer retreats at the monastery and composed numerous writings, including his most famous work, Orthodoxy and the Religion of the Future, where he writes, “According to [scriptural and patristic] sources, world history will culminate in an almost superhuman ‘Christian’ figure, the false messiah or antichrist…. he will be not merely the greatest enemy of Christ, but in order to deceive Christians will appear to be Christ…”5

The word “Antichrist” does not mean only “against” Christ, but also “in the place of” Christ. This is how the spirit of Antichrist is so deceptive. St. Ignatius Brianchaninov, a 19th-century Russian saint, beloved by Fr. Seraphim, writes, “[t]he Antichrist will show himself to be meek, merciful, filled with love, filled with all virtue…. [and] a logical, equitable, natural result of the common moral and spiritual direction of man.”6

It is evident how great the deception will be, and already is, for as Fr. Seraphim wrote, “Satan, it would seem, is now entering naked into human history.”7 Therefore, no one is immune. Any version of a utopia on earth, even a Christian society—if it forgets that we are exiles from our true home—remains worldly and furthers the agenda of Antichrist. Perceiving this phenomenon, Fr. Seraphim prophetically proclaimed, “[a]ll of politics is heading in the direction of a one-world government which cannot be anything but universal slavery.”8

Ultimately, intellectual knowledge about the Antichrist and the coming Apocalypse, merely studying the signs of the times and not remaining watchful in prayer9, is vain and helpless. Fr. Seraphim taught that “mere correctness in Orthodoxy without a loving Christian heart will not be able to resist Antichrist; one will recognize him and be firm to stand against him chiefly by the heart and not the head.”10 No one can thwart what God has foretold, but through daily repentance and fervent prayer we can destroy the power of the enemy in our own heart.

Fr. Seraphim was keenly aware the end was near, not only the end of the world, for the signs were many even then, but even more so the end of his own earthly life. Sunk deep inside his heart was the awareness that “he who endureth to the end shall be saved.”11 Having acquired this truly Christian sense of peace yet urgency, Fr. Seraphim often stressed, “It’s later than you think! Hasten, therefore, to do the work of God.”12

The more Fr. Seraphim made Orthodox teaching accessible to English speakers, the more interest in Orthodoxy grew in America. Through his writings and spiritual guidance, word spread, drawing spiritual seekers from a wide variety of backgrounds to the monastery.

Those who knew him would say that Fr. Seraphim was given the gift of discernment. When he spoke, his love and simplicity pierced the heart. According to Fr. Seraphim, the primary pitfall for converts to Orthodoxy is trusting oneself; his remedy was “sober distrust of oneself, taking counsel of others wiser, guidance from Holy Fathers.”13 The Holy Fathers are the God-inspired teachers of each generation, teaching both in words and deeds. Every Christian needs real-life examples of how to live according to Christ. Fr. Seraphim provided this instruction by publishing biographies of the greatest of saints and being a God-inspired man himself, in the way he lived each moment. In Fr. Seraphim the truth of the gospel was incarnate.

Fr. Seraphim received the living and holy tradition of Orthodoxy from righteous men before him and passed this on to faithful men who are now teaching others.14 He loved his fellow Americans so deeply that after guests at the monastery had retired for the evening, he would often fall down before the holy altar in the church and with tears implore God to guide and protect them on the narrow path. Americans have in Fr. Seraphim a “blueprint” for acquiring the mind of Christ and overcoming the onslaught of the evil one through an honest and humble study of his words and deeds.

Fr. Seraphim Rose stands as one who transcended the vanity of American life and the myriads of false spiritual paths to illuminate the narrow path of Christ for Americans. In these times of peril, Americans are not only increasingly uncertain about how to maintain healthy families and endure surging economic and moral disaster but about who they are and who they are meant to be. Fr. Seraphim, who may soon be formally recognized as a Saint by the Orthodox Church, exhorted us to be “always returning to the ‘one thing needful’: Christ and the salvation of our souls from this wicked generation.”15

The current abbot of the St. Herman Monastery, Fr. Damascene Christensen, captures the significance of Fr. Seraphim for all: “[b]y the grace of God, he was raised up in a particular place at a particular time, in order to be a pathfinder for the rising generations of American Orthodox converts.”16 Fr. Seraphim Rose gives Americans the spiritual tools to survive these dark times and to acquire what our hearts are made for — Christ and His Kingdom.

Timothy Honeycutt is an Orthodox Christian and the creator of the Orthodox Wisdom podcast. He works as a CPA and lives in Sacramento, CA with his wife and daughter. He can be found on Gab @AudioScribeOW