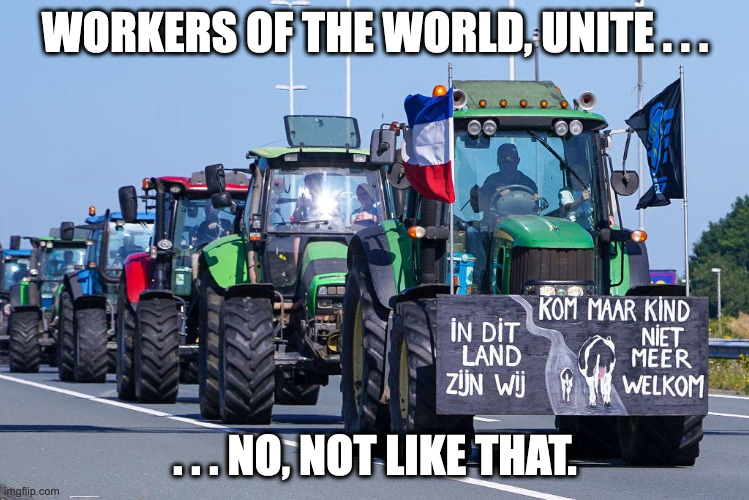 Christian Nationalism and The Machete of Disobfuscation

One of the things that everybody needs to be braced for is a spate of articles, books, think pieces, documentaries, and the like on the rising threat of Christian nationalism. That being the case, you are likely to hear a lot about it from me as well. I intend, over the coming months, to sharpen my Machete of Disobfuscation, and, together in fellowship with you, to clear out some of these thickets.

Let us begin with a definition, just so we keep things perfectly clear. A Christian nationalist is anyone to the right of Susan Collins.

A recent article at Mere Orthodoxy recognized this problem, at any rate. The author, Miles Smith, was not objecting to the uselessness of Christian nationalism, but rather to the uselessness of the term “Christian nationalism.” In his article, Smith makes a number of shrewd observations, with which I am in hearty agreement. And I like his intellectual honesty when it comes to historical theology—he does recognize that the magisterial reformers had an attitude toward the civil magistrate that was not, um, secular. So there is some good stuff here, and I agree with him that a term of abuse that is currently being used to marginalize any and all conservative believers is not necessarily the term we would have picked to describe our position, had we gone out shopping for a term. Which we didn’t.

At the same time, three cheers for Christian nationalism! And I hardly ever use exclamation marks!

The reason I say this is because, also at the same time, I think Smith is overlooking a couple of important points. What are they? you ask. I’m glad you brought it up, I reply.

In order to get a grasp of the biblical background on this particular issue, I would refer you all back to an important piece I wrote back in January of 2021. What are we to make of all the Jesus mobs in the New Testament? And why does it matter?

Mobs are mobs, and angry mobs are angry mobs. Smith is exactly right about Luther’s dim view of the peasants’ revolt. At the same time, do we not sometimes wonder if the peasants, humanly speaking, might not have been severely provoked? Is it possible that they had been goaded right up to the point of human endurance? Yes, this is possible. This is because mobs are not only mobs, elites are elites, and corrupt elites are corrupt elites.

Because human governance is inescapably hierarchical, it is therefore really important that the rulers conduct themselves in the light of God’s revealed will. Because if they don’t, and they get into a mindset where they answer only to themselves, if they appoint themselves to occupy the role of secular lords, this means that they will start to do all manner of unconscionable things. They begin to beat the male and female servants, and they eat and they drink and they get drunk (Luke 12:45).

“The prince that wanteth understanding is also a great oppressor: But he that hateth covetousness shall prolong his days.”

I am quite prepared to believe that the rioting mobs in Sri Lanka are capable of any number of dirty deeds. Angry mobs do what angry mobs do. I do not view them as a surging flood of righteousness. When the dam gives way, the water flows where it is going to flow.

At the same time, we should be willing in principle to have a few words with those Bringers of Uplift who decided in their great wisdom to blow up the dam. In the name of preventing climate change, a number of restrictive laws were introduced in Sri Lanka which rendered the people incapable of feeding themselves. When this kind of thing happens, the people frequently develop opinions on the matter.

The ruling elites running the current secular order are so mendacious, so corrupt, so incompetent, so duplicitous, so leprous, so diseased, so full of themselves, so hypocritical, so lecherous, and so godless, the end result of all their schemes for ushering in their endless sunshine and high speed rail is that they have determined to blow up any number of dams. They have done it in the UK, in the Netherlands, in Spain, in the United States, in Sri Lanka, and so on.

What this means is that I don’t have to defend the mobs because I am not the one who caused them to form. Somebody else did that. What we are dealing with is grotesque mismanagement by the elites, and at levels such that a form of grandeur creeps into it.

Me: You don’t want to blow up that dam.
Them: But this would allow the salmon to swim upstream freely.
Me: I dare say, but you still don’t want to do it.
Them: The engineer who designed this dam went to a party in blackface once, in 1977.
Me: Still, it would be enormously destructive to blow it up.
Them: We’re gonna, because antifa rocks. Kablooie!
[Sound of a towering wall of rushing water]
Them: Aiieeee!
Me: This is what happens . . .
Them: Why are you defending the J6 incursion?
Me: I am not defending anything. I am explaining. And the explanation includes the fact that you are the ones fomenting all of this.

I am going to keep this conclusion relatively short because whenever I am forced to talk about the influence of the Moscow project, I am acutely aware of the fact that I am trapped between the Scylla of Proverbs 27:2 and the Charybdis of 2 Cor. 12:11. This embarrasses me no end and so I am forced, while writing about this kind of thing, to dig a chastened divot in the carpet of boasting with my toe of humiliation.

What are we going to do about the ickiness of this populist revolt?!

Here is the trick. If the official policy of evangelical establishmentarians is to ghost all those who fit in that category, ignoring their existence entirely, it is then child’s play for them then to treat the remainder of God’s good folks as the great unwashed, as the booboise, as the clodhoppers of culture. If we discount the theological leadership of this movement, then this brings us to the inevitable criticism that they have no theological leadership.

This blog article originally published at dougwils.com on Wednesday, July 20, 2022.

Doug Wilson is a Christian minister, husband of Nancy, grandfather of minions, and resident of Idaho. For further information see his blog here.