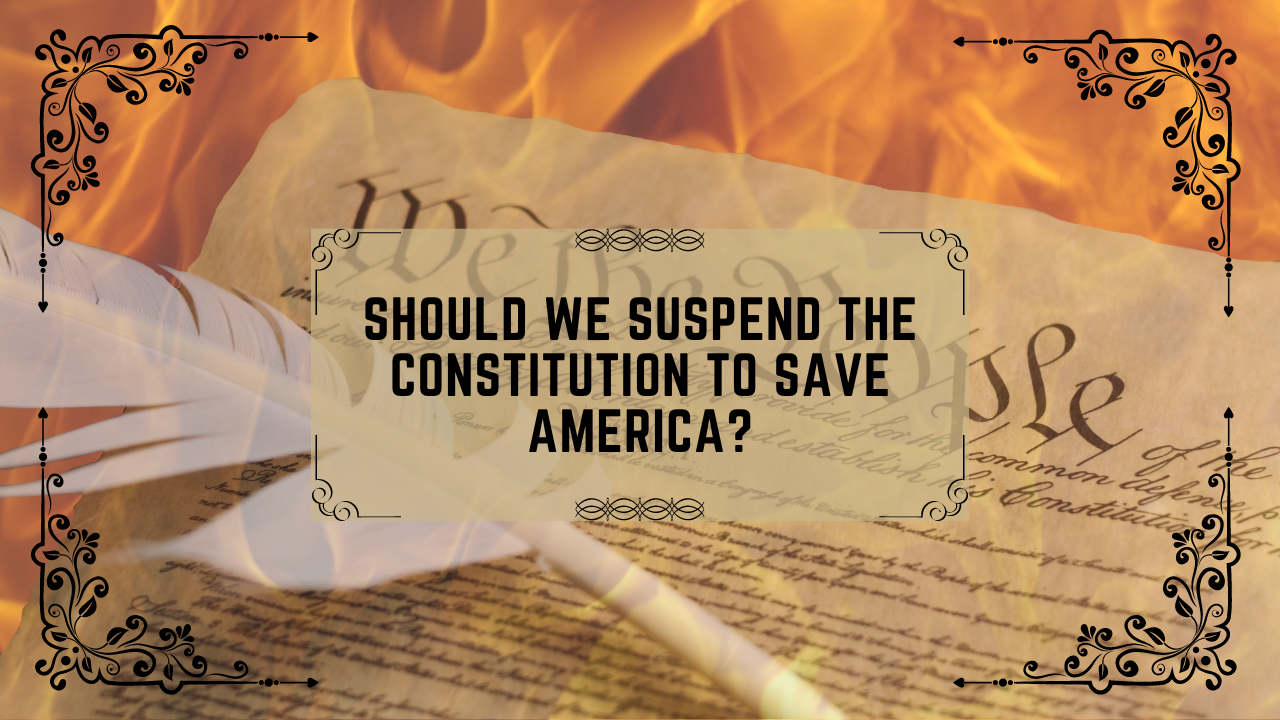 Should We Suspend the Constitution to Save America?

After the collusion between Twitter, the FBI, and DNC to suppress the story of Hunter Biden’s laptop was revealed, President Trump posted the following on his social media network:

Immediately, anti-Trump conservative pundits and politicians seized upon the post as evidence that Trump wished to suspend the U.S. Constitution, and debate rages over whether he “actually meant that or not.”

Setting aside this debate, the controversy brings up a much more important question. Is the U.S. Constitution actually in force in America in 2022 to begin with?

While the forms and norms surrounding the Constitution are certainly still standing (we still have an Executive Branch, a bicameral legislature, a Supreme Court, etc.) are these things any more than a perfectly maintained facade of an otherwise rotting, leaking, collapsing building? Do we even have the same government that was created in 1787? Would James Madison or Alexander Hamilton recognize the America we live in today?

To anyone who is not terminally naive, the answer is a very hearty, “OF COURSE NOT!”

Even if we limit the question to the events of the 20th Century, we do not have anything close to the constitutional republic established in 1787. The entirety of the New Deal was flagrantly unconstitutional. There never was any question about it. FDR had to threaten to pack the Supreme Court to prevent any constitutional challenge to our republic’s transformation into a leviathan resembling a totalitarian state. In 1933, the U.S. Constitution underwent a de facto suspension to create New Deal America, and that suspension was never lifted.

Later still, after the New Deal and Second World War more fully transformed America into the liberal democratic totalitarian state we now live in, wokeness became the new U.S. Constitution in 1964 with the passing of the Civil Rights Act. What has been sold to us as a legal solution to America’s racism, was in fact the legal foundation for the very radical leftist egalitarianism that dominates us to this day. This is the thesis of Christopher Caldwell’s excellent 2020 book, Age of Entitlement. Outlawing “discrimination” is a vehicle for the leftist culture war. Reasonable, sincere, soft-hearted Americans were told that this would be the solution to America’s racial conflict, yet 60 years later that strife is as bad as ever, and now it is used to force you to celebrate sodomy and for your children to be taken from you and castrated without your knowledge. The entire DEI system, the tyranny of the HR harridan, the cult of tolerance and inclusion that suffocates all of life, all of this has its origins and basis in America’s new Constitution.

Between the creation of the totalitarian administrative state in the New Deal and the abolition of any right to freedom of association in the Civil Rights Act, the U.S. Constitution is nothing more than a husk employed to keep Americans from revolting against their rulers.

For example, Barack Obama can bomb any country he likes, he can drone strike American citizens, and he can mandate the purchase of health insurance; State governors can lock you in your home indefinitely, the President can mandate that certain vocations receive a deadly experimental injection, and State Secretaries of State can unilaterally change election law any time they like. All of those things are perfectly “constitutional.”

But when someone like Donald Trump wants to fire certain members of the administrative state, investigate whether the previous administration laundered money through a foreign nation, halt immigration from dangerous groups, or even respond to highly organized left-wing political violence, or pursue foreign and trade policy to the benefit of actual Americans, well, apparently the U.S. Constitution isn’t a dead letter after all!

How should we think about the current situation? The first thing we must do is admit reality rather than live in delusion. As much as we love it, the American Republic of 1787 is gone. It was gone long before you were born. All that remains are vestiges meant to confer its legitimacy on something completely different. Our current government is like the German Kaiser or Russian Czar giving themselves those titles to bolster the claim that they are the real Roman Empire. We should view our government and Constitution in a similar way. You can call a Russian or a German “Caesar” but that doesn’t make them the emperor of Ancient Rome. You can call Joe Biden “President of the United States” but that doesn’t make him George Washington. The Republic that George Washington presided over is dead and buried. We have to admit that in order to preserve the nation that he was instrumental in founding.

For many, this is an unthinkable thing.

You have been told your entire life that you live in the same country that belonged to the Pilgrims, Benjamin Franklin, and Thomas Jefferson. But it is not. It is a country that has been totally captured by an evil, godless ideology that is at war with everything good, true, and beautiful, and with reality itself. Every institution in all of life, from government, finance, business, academia, education, journalism, entertainment, and even most churches, are now captured by the ideology of the Left. This ideology not only seeks your destruction, but the destruction of anyone and anything you love.

It is an ideology that is at war with you, whether you realize it or not. Accordingly, your goal must be the total and complete destruction and defeat of Leftism. As Charles Haywood wrote in his recent “No Enemies to the Right”:

“What is our end? That is easy — winning. What is the winning condition? It is the total, permanent defeat of the Left, of the ideology at the heart of the Enlightenment, with its two core principles of total emancipation from all bonds not continuously chosen, and of total forced equality of all people. When this defeat is accomplished, Right principles, those based in reality and recognizing the nature of man, his limitations, and his capabilities, can again become ascendant.

Winning does not mean electoral victory such that Right principles may be voted into law, and then nullified or voted out again. It means the total, permanent elimination of all Left power, and, even more importantly, the total discrediting, both on a moral and practical basis, of all Left ideology. What is Left should be seen for what it is, evil, and it should be seen as not only destructive in practice, but laughable, the ideology of losers and idiots, or at most something from the discredited past, viewed with vague curiosity, as the cult of Mithras is today.”

War against the Left is a total war. There can be no tactical restraints apart from that which God has expressly forbidden. This means that departing from even the most cherished parts of our heritage must be on the table—including suspending the U.S. Constitution if need be. Your enemy is the grandchild of Saul Alinsky, and knows well his dictum to exploit his enemy’s rules and use them against him. You need to be willing to deprive him of this advantage. There are far too many of us on the right, who have been trained to think that as you are about to be tossed into a mass grave while your children are trannyfied, being able to say “at least I never considered abridging the U.S. Constitution” is something admirable and dignified.

We must put to death the impulse to be “beautiful losers.” All things being equal, do we have the deepest respect for the U.S. Constitution, Anglo-Saxon common law tradition, and respect for rule of law? Of course we do. But all things are not equal. For all things, at a certain point, there exists a state of exception, and while it is extremely difficult to say when that state of exception exists, the moment they start taking your children away, brainwashing them, and removing their genitals, it is an appropriate time to have that discussion. In other words, the question of  “if we press this button, a Caesar comes in and Leftism is eradicated, but the U.S. Constitution is suspended to do it” is introduced. And we have now reached a point where people who have been trained their entire lives to view the U.S. Constitution as a document just below Holy Scripture are actually considering pressing that button.

This is not something that should terrify us. These are important questions to think through. To paraphrase both Lysander Spooner and Anton Chigurh, “if the U.S. Constitution brought you to this point, of what use was the U.S. Constitution?” We have reached a moment of decision. Do we wish to defeat the Left? Or continue to lose with dignity? Do we wish to preserve America? Or preserve a legal document that is only ever in force when used against us?

These are questions we must at least be willing to ask ourselves, not because we wish to destroy the traditions of our nation, but because we love them and wish to preserve them.