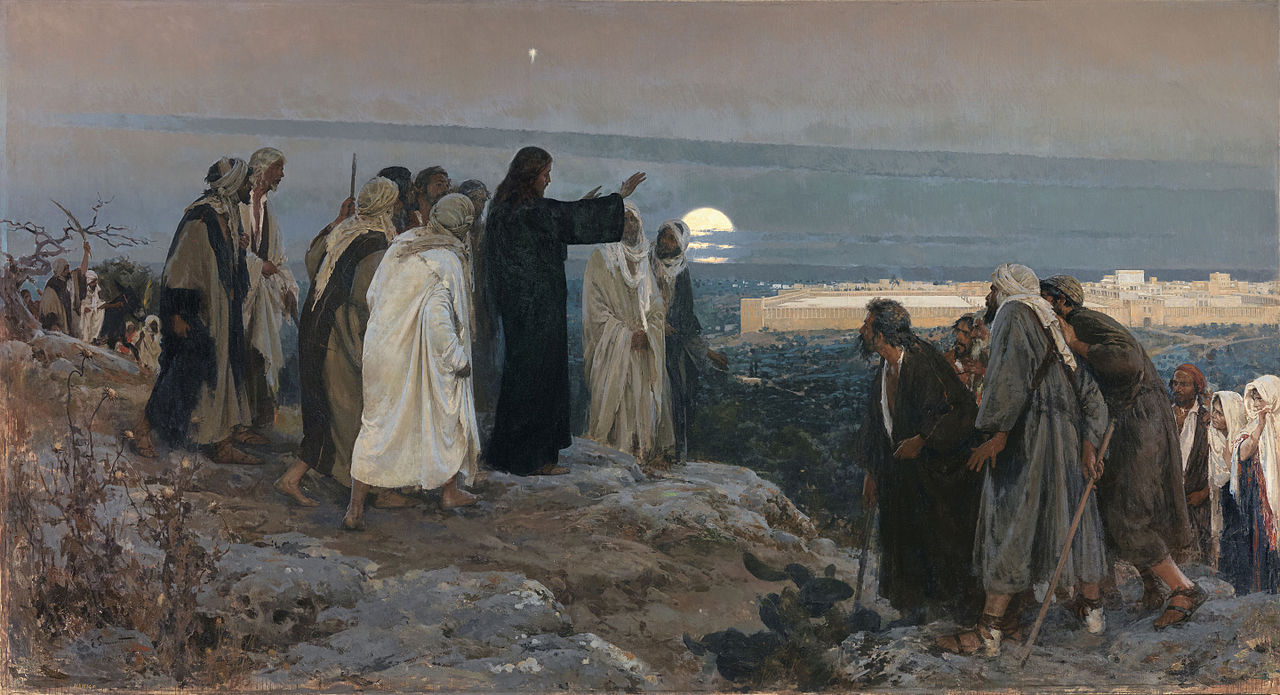 Matthew 24 and Revelation – Fulfilled in AD 70 or Future? Part 2

Having pointed out the importance of interpreting Matthew 24 and the book of Revelation in developing long-term strategies against the New World Order and beyond, we now turn our attention to giving a proper exegesis/interpretation of Matthew 24 here in part 2.  This article will focus on the disciple’s question(s) and what “age” would come to an end in Jesus’ contemporary “this generation” (Mt. 24:3, 34).  This and how the general signs Jesus gave were not signs for our generation but were fulfilled prior to AD 70.

However, we simply want to follow the text wherever it leads without reading things into it.  The facts are the disciples wanted to know when the destruction of the Temple, the end of the age and coming of the Son of Man upon the clouds would take place and to have some signs before these events would be fulfilled.  Based upon the book of Daniel they linked all of these things together and so did Jesus since He said, “all these things” (not some or one of these things) would be fulfilled together in His contemporary “this generation” (Mt. 24:34).  Is it possible to show how “all these things” were fulfilled by AD 70?  Absolutely.

Milton Terry was spot on when he wrote of Jesus’ teaching on the “end of the age” in the Olivet Discourse and elsewhere in the NT (such as Hebrews 9:26-28) as the end of the old covenant age and not the end of world history:

“The ‘end of the age’ means the close of the epoch or age—that is, the Jewish age or dispensation which was drawing nigh, as our Lord frequently intimated. All those passages that speak of ‘the end,’ ‘the end of the age,’ or ‘the ends of the ages,’ refer to the same consummation, and always as nigh at hand.” “…the writer regarded the incarnation of Christ as taking place near the end of the aeon, or dispensational period. To suppose that he meant that it was close upon the end of the world, or the destruction of the material globe, would be to make him write false history as well as bad grammar. It would not be true in fact; for the world has already lasted longer since the incarnation than the whole duration of the Mosaic economy, from the exodus to the destruction of the temple. It is futile, therefore, to say that the ‘end of the age’ may mean a lengthened period, extending from the incarnation to our times, and even far beyond them. That would be an aeon, and not the close of an aeon. The aeon of which our Lord was speaking was about to close in a great catastrophe; and a catastrophe is not a protracted process, but a definitive and culminating act.”[1]

And more specifically related to Matthew 24:3 and the “end of the age” Gary DeMar correctly connects the disciples asking about the end of the old covenant age:

“The “woes” of Matthew 23 and the destruction of the temple and the city of Jerusalem were a result of all that John the Baptist and Jesus had been warning the scribes, Pharisees, and chief priests regarding the judgment that would come upon them if they did not repent. “All these things,” Jesus cautioned, “shall come upon this generation” (23:36). It is after hearing about the desolation of their “house” – the temple – that the disciples ask about the “temple buildings” (24:1). Jesus answered the disciples’ questions relating to the time and signs of Jerusalem’s destruction, always with the background of Matthew 23 in view, since His comments in that chapter had precipitated the questions (24:3). The Old Covenant order would end with the destruction of Jerusalem. This would be the “sign” of the “end of the age,” the end of the Old Covenant, and the consummation [MJS – bringing to maturity] of the New Covenant.”[2]

Both Evangelicals and skeptics of the NT error when they identify Jesus’ teaching on the “end of the age” as the end of world history.  The skeptic says, “Jesus couldn’t be a prophet let alone God because he didn’t come upon the clouds and bring an “end” to world history.”[3]  The Evangelical simply reasons, “Since the end of world history didn’t take place in Jesus’ generation, He must not have come upon the clouds in AD 70.”  Both groups make the foundational error of not correctly identifying the “age” Christ predicted to bring an end to nor do they understand the apocalyptic language of the prophets when it comes to God / Jesus coming on the clouds.  This will become clearer in this series.

How were all the signs fulfilled prior to AD 70?

Jesus predicted that false messiahs would come in the generation of the first century disciples and they did – Theudas (Acts 5:36; 13:6), Judas of Galilee (Acts 5:37), and Simon (Acts 8:9-11), to name a few.  In the epistles of John, John writes (as that generation was ending) that they knew it was “the last hour” because the antichrists had arrived (1 John 2:17-18).

The Jewish historian, Josephus, writes of a false prophet during the destruction of Jerusalem who deceived the Jews to stay and fight the Romans:

“Of so great a multitude, not one escaped. Their destruction was caused by a false prophet, who had on that day proclaimed to those remaining in the city, that “God commanded them to go up to the temple, there to receive the signs of their deliverance.” There were at this time many prophets suborned by the tyrants to delude the people, by bidding them wait for help from God, in order that there might be less desertion, and that those who were above fear and control might be encouraged by hope. Under calamities man readily yields to persuasion but when the deceiver pictures to him deliverance from pressing evils, then the sufferer is wholly influenced by hope. Thus, it was that the impostors and pretended messengers of heaven at that time beguiled the wretched people.” (Josephus, Wars, 6.3.6.).

“In AD 40 there was a disturbance at Mesopotamia which (Josephus says) caused the deaths of more than 50,000 people. In AD 49, a tumult at Jerusalem at the time of the Passover resulted in 10,000 to 20,000 deaths.  At Caesarea, contentions between Jewish people and other inhabitants resulted in over 20,000 Jews being killed.  As Jews moved elsewhere, over 20,000 were destroyed by Syrians.  At Scythopolis, over 13,000 Jews were killed.  Thousands were killed in other places, and at Alexandria 50,000 were killed.  At Damascus, 10,000 were killed in an hour’s time.”[4]

“The Annals of Tacitus, covering the period from AD 14 to the death of Nero in AD 68, describes the tumult of the period with phrases such as “disturbances in Germany”, “commotions in Africa”, commotions in Thrace”, “insurrections in Gaul”, “intrigues among the Parthians”, “the war in Britain”, and “the war in Armenia”.  Wars were fought from one end of the empire to the other. With this description we can see further fulfillment: “For nation will rise against nation, and kingdom against kingdom.” (Matthew 24:7)[5]

When Jesus was addressing wars and rumors of wars, He was not referring to what is going on in modern day Russia, China, Israel, Iraq, the United States, or Europe today.  To reach into Matthew 24 and back into the OT and twist these passages and prophecies by asserting that they are referring to these modern-day countries is irresponsible exegesis at best, or willful deception at the worst.

In AD 40 and AD 60 there were pestilences in Babylon and Rome where Jews and Gentiles alike suffered.  Tacitus, Suetonius and Orosius all record a famine in the Autumn of AD 65 that killed more than 30,000 throughout the Roman Empire. Sorry, but natural corona viruses or government-engineered, manipulated ones are NOT the subject of the Olivet Discourse.  And as much as I have enjoyed the Alex Jones Show lately, he had a Christian reporter on his show that was quoting, “…people fainting with fear …of what is coming…” (Lk. 21:26) as evidence WE are living in the “end times.”  Just because we have a plandemic and people are “fearful” does not translate that our generation is seeing these signs fulfilled let alone that we are living in the “end of days” etc.

The book of Acts records for us an earthquake occurring in the apostolic generation (cf. Acts 16:26).  “…just previous to 70 AD there were earthquakes in Crete, Smyrna, Miletus, Chios, Samos, Laodicea, Hierapolis, Colosse, Campania, Rome, and Judea.”[6]

In fulfillment of our Lord’s words, Paul and Silas were beaten (Acts 26:23) and Paul was brought before rulers and kings – Gallio (Acts 28:12), Felix (Acts 24), Festus and Agrippa (Acts 25).  Peter and Paul were put to death in the persecution of Nero.

It is not difficult to see how “all” of the eschatological events asked of the disciples were fulfilled in their AD 30 – AD 70 “this generation” – per Jesus.  While Futurist “prophecy experts” would tell us the CV-19 “plague,” “fear” and “wars and rumors of wars” between America, China and the New World Order are signs of Christ coming in our generation, nothing could be further from the truth!

Even though the “prophecy experts” claim these general signs mark the nearness of Christ coming in our generation, Jesus specifically said these general signs would “not” mark the end being near (cf. Mt. 24:6).  Jesus did say that two other signs would mark the end of the old covenant age and His coming as being “near” in their “this generation” and those will be the focus of part 3:  1). the Great Commission and 2). the Abomination of Desolation or when the armies surround Jerusalem.  And if I have you saying, “Yeah, good luck showing how the gospel was preached in “all the world,” to “all nations,” and to “every creature under heaven” prior to AD 70” – I have you right where I want you.  Stay thirsty my friends (Ps. 42:1) and I will see you in part 3.

[3] When it comes to “Jewish” skeptics such as “Rabbi” Tovia Singer that use this “argument,” we must point out that Jewish sources identify Daniel 7:13, Daniel 9:24-27 and Malachi 3-4 as “Messianic.”  They believed Messiah would be divine and He would come upon the clouds to judge the second Temple.  Jesus is the ONLY messianic candidate that lived during this period and fulfilled these prophecies – see Michael Sullivan, Armageddon Deception The Eschatology of Islam & Zionism a Biblical Response (Ramona, CA: Vision Publishing, 2021) pp. 357-400.  Christ came upon the clouds through the Roman armies and burned the Temple and the genealogical records of the Jews and brought an end to the old covenant system of Judaism.  King Jesus destroys and puts to silence the objection of modern “Jewish” opponents of Christianity when it comes to this alleged “failed” coming of the NT Son of Man.  I have challenged Tovia Singer to a public debate on this issue.  He initially seemed to accept but then backed out.