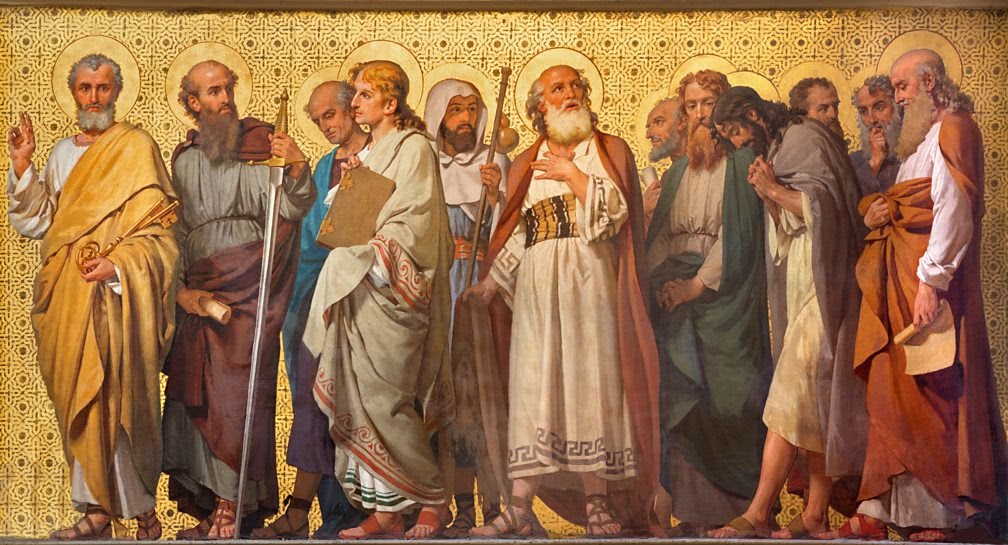 Against the Modern Judaizers

Is the celebration of Christmas pagan? What about the celebration of Easter, is it pagan too? Certainly, the celebration of Halloween must be pagan, right? How about worshiping God on Sundays? Surely that is pagan, no? Is it all some big conspiracy? Are the historical churches of Christendom secretly trying to simulate ancient Pagan worship, while fooling us all into believing this honors Jesus Christ? These are the sorts of questions that permeate our modern culture, and what they amount to, collectively, is an outright and direct assault on Christianity.

The objective behind these attacks is to undermine our Christian culture, fracture it, balkanize it, and then replace it with something more distinctively “Jewish” in appearance. While I could go into the errors behind every specific attack on each individual subject, as I have in the past, I think there is a much bigger or, overarching, problem in play here. What all of these individual attacks really amount to is Judaizing. I submit to you that the modern Church, much like the early Church, has a significant problem with Judaizing. And we are seeing it play out here with each and every attack that is made against traditional Christianity and traditional Christian culture.

The Biblical definition of a “Judaizer” is a Christian who attempts to bind other Christians to the Old Testament Mosaic Law. It is probably the oldest Christian heresy. We first learn about the Judaizers in the Acts of the Apostles, chapter 15, which records how certain Jewish Christians (meaning Jews who had converted to Christianity) were telling non-Jewish, or Gentile, Christians that they needed to be circumcised in order to remain as Christians.

Circumcision is the initiation ritual into the Old Covenant Law of Moses. A man cannot be a practitioner of ancient Jewish religion, or modern Judaism unless he is first circumcised, and it is the first of many steps along this path. It doesn’t end with circumcision. It never does. Circumcision is just the first step. What follows is keeping kosher, worshiping on the Sabbath day (Saturday), and observing the Mosaic feasts (Passover, Pentecost, Trumpets, Atonement, and Booths) as well as the Maccabean feast of Hanukkah. In other words, circumcision is an initiation ceremony into a whole way of life, a Jewish way of life.

As one can imagine, this caused quite a stir in the early Church, which led to the Church’s first ecumenical council, known as the Council of Jerusalem, again recorded in Acts 15. I encourage you to read the account for yourself, in whatever Bible translation you prefer. I’ll just outline the highlights here.

In the fifteenth chapter of Acts, verses 1 through 5, we learn about this dispute in the early Church. The Judaizers made their case that Gentile Christians could not be saved unless they first became practitioners of the old Mosaic Law. This would be initiated by circumcision. When Paul and Barnabas came to Jerusalem, to discuss this with the elders of the early Church, they were immediately confronted by the Judaizers among the Christians in Jerusalem, who said very boldly, “unless the Gentile-converts to Christianity are circumcised, they cannot be saved.” Acts 15:5 specifically says that these Christians were ethnic Jews who still belonged to the Party of the Pharisees.

Acts 15:6-21 recounts the proceedings of the Council of Jerusalem in detail. The Apostle Peter specifically recalled that he had preached to the Gentiles himself, and placed no such burden on them. Those familiar with the Acts of the Apostles will recount Peter’s dealings with the Gentiles in chapter 10, wherein he received a vision of many unclean animals, and God’s voice telling him to “rise up, kill and eat.” Peter himself gives his interpretation of this vision in his following actions. The unclean animals represent the Gentiles, and “eating” is not a command for Peter to break his Kosher dietary habits, but rather to begin associating with Gentiles bringing them into the Church as fellow Christians, without putting the requirements of the Mosaic Law upon them.

Acts 15:22-35 recounts the Council’s final decision to allow Gentiles to come into the Church, as Gentiles, without requiring that they keep the Law of Moses. A letter was sent to Gentile Christians with the following instructions: (1) the Judaizers do not have any authority from the Church in Jerusalem, you may ignore them, (2) listen to Paul and Barnabas instead, (3) abstain from participating in idolatry, (4) don’t drink animal blood, (5) don’t eat bloody (strangulated) meat, and (6) don’t engage in sexual immorality. That was it. The Council of Jerusalem put no further obligations on the non-Jewish (Gentile) Christians. We see Paul deal with the Judaizing heresy again, multiple times, throughout his epistles in the New Testament.

The bottom line is this. Christians can be ethnically Jewish or ethnically Gentile. One’s race or ethnicity (or even one’s culture) is irrelevant. It is forbidden, however, to impose the Law of Moses on Gentile Christians in any way. Christianity is not to be an ethno-religion, overriding Gentile cultures with Jewish culture, but rather a universal faith for people of all races, ethnicities, and cultures.

The ancient Greeks had a word for such universalism. It was an adjective called katholikos (καθολικός) and it translates to “universal,” meaning not tied to any particular race, ethnicity, or culture. It is where we get the English word “catholic.” Acts 15 set Christianity as a katholikos (or “universal”) faith for all people. Gentiles need not adopt the precepts of the Law of Moses, or Jewish culture, to be good Christians. The word katholikos (καθολικός) was first recorded in AD 105 by Ignatius in his Letter to the Smyrneans. Ignatius was a bishop of the early Church in Antioch, and a direct disciple of the Apostle John. He was martyred that same year in the Colosseum in Rome, mauled by lions.

This leads us to another word you won’t find in the Bible, or the writings of the early Christians, but was later coined to succinctly describe what the early Christians were doing in the first few centuries of Church history. That word is inculturation.

Inculturation describes the process of Christianity absorbing cultures as it advanced from place to place in the ancient world. The idea behind it is based on the events recorded in Acts 15. Rather than steamrolling over Gentile cultures with religious precepts that demand a culture adapt to it, which is exactly what the Pharisees did (Islam does it too), Christianity absorbs a culture and baptizes it (so to speak), preserving what is good and wholesome, or at least harmless, about that culture, while eliminating those things that are idolatrous or immoral.

This is how Europe was made. It’s also how Russia was made. It is also how the Middle Eastern and North African Christian cultures were made before they were steamrolled by Islam. More recently, we see the principle of inculturation applied to the Americas over the last 500 years, and we are only beginning to see it applied to Sub-Saharan and Far Eastern cultures now. Inculturation, based on the principle laid down in Acts 15, is how Christianity baptizes and redeems different Gentile cultures, preserving them and making them into a tapestry that is called “Christendom.”

Of course, the question arises, what gave the Apostles the authority to do this? This brings up another word not found in the Bible but describes a very Biblical concept. It is called supersessionism. This is a commonly misunderstood Christian doctrine. Many Christians believe it means that Gentile Christians have “replaced” Jews as the chosen people of God. That’s a drastic oversimplification that is incorrect. What it truly means is that the New Covenant in Christ has superseded the Old Covenant in Moses. That means there is neither Jew nor Gentile, metaphorically speaking, under the New Covenant. It’s open to anyone, and you don’t have to change your ethnicity or culture to be part of it. You certainly don’t have to keep the Law of Moses.

So with all this in mind, now enters the Modern Judaizers of the 21st century. Who are they? They are Christians, just like the Judaizers of ancient times, believers in Jesus Christ who have a gross misunderstanding of what it means to be a Christian. Only this time, they may or may not be ethnically Jewish. The definition of Judaizing is trying to make non-Jews follow the precepts of the Old Covenant or the Law of Moses. This is not the same as Jewish Christians (or Hebrew Christians) who simply want to keep their Jewish customs within their own families, as a cultural connection to their ethnic people. That, in itself, is a personal matter, and by definition, it is not Judaizing. No, modern Judaizers are Christians (whether Jewish or not) who try to convince other Christians that in order to please God, they must keep various aspects of the Law of Moses (Old Covenant).

Each Judaizing group has its own particular agenda. For some, it’s about worshiping on Saturday (the Sabbath) rather than Sunday. For others, it’s about keeping the Jewish feasts of Hanukkah instead of Christmas, or Passover instead of Easter. For some, it’s about wearing Jewish clothing or celebrating Jewish liturgy. For others, it’s about exclusively using Hebrew words to refer to God, Jesus, the Holy Spirit and things of a Christian nature. For many, it’s a combination of all these things. Nearly all of them, however, have one thing in common. They attack and malign the traditional celebrations of Christmas, Easter, Halloween, and worship on Sundays. They usually spout elaborate conspiracy theories to back their claims, theories about the supposed “Pagan origins” of these Christian traditions. Many of them are terribly oversimplified, and some of them are just plain wrong. I won’t go into these errors here, as they are too many to account for.

These are the Modern Judaizers, and they’re not much different from the ancient Judaizers. They fail to understand the basic apostolic concept from Acts 15, that Christianity is a universal (katholikos) faith that is built on inculturation of Gentile cultures and supersession of the Old Covenant. It is not, and was never intended to be, a faith that mirrors the Old Covenant Law of Moses or even modern Judaism. The Judaizers were wrong in the first century, and they’re wrong in the twenty-first century as well. The Apostle Paul was very stern with them in the New Testament. He never wasted an opportunity to rebuke their errors and correct them. We should, likewise, learn from his example.