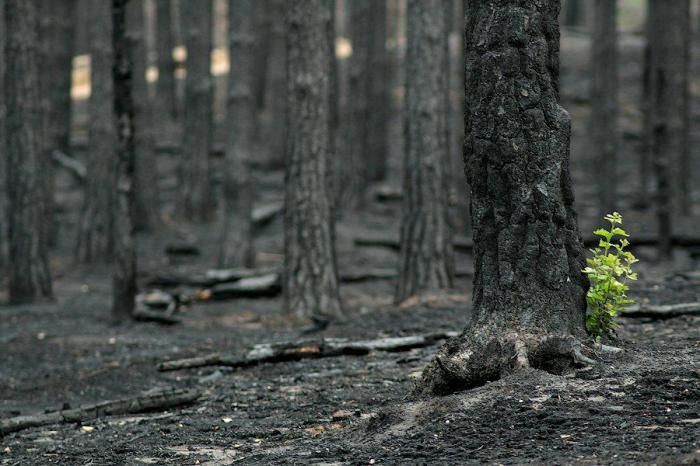 I am sitting up on a hillside in a camp chair on the land God has granted me. I am smelling one forest fire and gaze at the skeletons of trees from the last one. My hillside was burnt to the ground back in the 90s, and then again a few years later. Trees are made from nutrients pulled from the air, mostly, which is wild, and when they die and fall down, they make dirt. The opposed hillside in my valley is nothing but deadfall, there’s not even shrubbery. All of the dirt I see is essentially air turned into dead plants that turned into dirt.

The last time I was up here, I returned from this cursed earth with a slight case of vertigo and a not-so-slight case of coughing up lung butter. The vertigo took a couple of days to go away, and the lung butter a couple of weeks. It had been a disappointing trip even without that, I’d spent a full Saturday marking out the foundations for my house, and starting to dig them out, but I made very little overall progress.

I don’t exactly remember when I first wanted a homestead. Ever since I was fresh out of high school, I remember mourning the end of the Homestead Acts (1976). It always just seemed to be a way for a kid that grew up broke to make something of himself. You know, spend a few years working on a piece of land and own it at the end of it. Build a farm from scratch, build a house from scratch. Even when it wasn’t my “plan for life” it had always seemed like “yeah that’d be cool…”

As I got older, and as I started to focus on building a career and finding a wife, the idea of homesteading fell by the wayside. First, there was school, which, gotta be honest, didn’t go well for me. Then it was moving around the country, time and again, finding the next job to earn the next credential. I’m a professional aircraft mechanic, which means I work at an airport which means I tend to work in larger cities. Good jobs in small towns are very rare and getting married was always more important anyways.

I had moved back to my hometown before we got married, and bought a house near to the one I grew up in, but a combination of out-of-state people moving in and the usury-based economy had priced us out of any house with a sufficient amount of land to tell children “Go play outside until dinner time.”

So, always in the back of my mind, there was a dream that was often daydreamed and only occasionally prayed for. And one day, in the way of such things, God provided that dream. I suppose that if I stopped this post here, and ended it with Jeremiah 29:11, then the moral of the story could be “just trust God, and He’ll make your dreams come true. God knows the plans He has for you, and He wants you to be prosperous and unharmed.”

I may be hilariously arrogant and convinced that I can be a successful homesteader with sufficient effort, intelligence, and stubbornness, but that tripe about “God just wants me to be rich and happy”? That’s not what I believe. God is not my wish granter, and God is not my vending machine. God does not wait until I’ve said the right number of prayers to give me what I want.

Don’t get me wrong, I have what I’ve wanted for a great many years: a blessing of a wife, healthy children, a solid career, and even my own land. But I’ve also been given hardship after hardship. I’ve lost jobs, lost friends, and moved so many times that I mark the years by which state I was living in. Depression. Sicknesses. Injuries. Marriage counseling. A decade on the graveyard shift. The struggles of new parenthood, and the struggle of two-kids-under-two. My wife hasn’t gotten a full night’s sleep in almost 3 years, while I complain about only four hours at a time.

I was offered a job near the homestead. The wage was below industry standard, and there’s not an apartment for rent in the county that’s big enough for my family. It was disappointing. It would have been amazing for God to have provided for us a way to immediately move onto the land, but I guess we didn’t need that. Actually, it’s not a “guess”. It’s a firm knowledge that God knows that us moving onto the land at this point wouldn’t have helped us in the ways we actually need help.

God gives us everything, but only the things, that we need to aid in our repentance, to turn towards Him, and to help other people. God does not give us riches just so we can have nice things. This dry, rocky soil, these burned-up and fallen trees, none of them are here just for my benefit. God cursed the ground, this very ground, in Genesis. He didn’t bless it to easily grow Adam fruit all the days of his life. He cursed it so that Adam would be aided in his repentance.

Orthodox Christianity, as opposed to the megachurches preaching the prosperity gospel, teaches us to say “Glory to God for all things.”

Not just the good things. Not just the things we want to boast about. I don’t lead off at dinner parties about the time I got thrown out of Bible college and into a psychiatric ward, on suicide watch, in Washington. But that led to me going on a road trip with an Orthodox man, which is how I found Orthodoxy. Being homeless after Washington led to my moving to Oklahoma, attending tech school, and eventually finding my wife at a parish there.

Glory to God for all things.

We don’t know the plans, nor what will come before the “prosperity”, or even what form that “prosperity” will take. We don’t need, hell, we don’t even want to know the plans. We certainly don’t want an angel to come down and tell us what to do.

Let me pause here: Every single time an angel shows in the Bible, they start by telling the faithful person they’re about to give a message to, to be not afraid. Even the Theotokos was told to be not afraid. Because the actual human response to being in the presence of absolute holiness in the form of an angelic messenger is fear. Because you know you’re not half as holy.

Setting that aside, at no point would angsty, 19-year-old me wanted to have known “see, about 14 lonely, heartbreaking years from now, during which nothing you’re praying for now will happen, and will repeatedly end in failure, you’re gonna have one of the best days of your life, the one in which you catch a bullet with your throat and almost die, and then you’ll find your wife a year later, and everything will still be obnoxiously difficult.”

Humans aren’t meant to handle that kind of knowledge. We can barely handle our knowing our own need for repentance, and more than one of the Desert Fathers have said that the greatest form of knowledge is the knowledge of one’s own sinfulness.

Glory to God for our ignorance of what paths our lives will take.

Even when God knows in advance that the teenager in Idaho that’s daydreaming about a homestead will own one two decades later. As it were, homesteading and Orthodox Christianity rhyme quite well. While married couples obviously don’t belong in monasteries, they are told during the preparations for an Orthodox wedding that their home will be their monastery, where they are to work out their salvation with fear and trembling.

In modern, decadent, me-first America, nothing symbolizes the rejection of the worldy culture more than a monastery, and a homestead is a close second. It’s a choice to do everything the hard way. The slow way. The way that requires hard work, obedience to what we’ve been taught, and self-sacrifice, first, before progress can even be glimpsed. Not for the arrogance of “I did it the hard way.” But for the pure victory that comes only without shortcuts.

Today I staked out the foundation for a greenhouse. Pounding four small stakes a few inches into the ground winded me. I’ve gotten soft in the past few years, as my job has become increasingly technical and thus less physical. In my defense, I also lost over 1,300 feet of air. Tomorrow, I’ll dig out the trenches and hopefully get forms installed. The day after, I’ll lug over two thousand pounds of concrete down a hill and mix it in a wheelbarrow to lay those foundations.

My progress is disappointing.

But there’s no use remaining disappointed in what happens. It’s one thing to feel unhappy in the stumbles and falls in the pursuit of our goals but, it’s entirely anti-Christian to remain in a state of disappointment. I have everything I’ve ever wanted, and it’s harder than I ever thought possible, but I’m not allowed to wallow in self-pity. God wants me to repent of my sins, which is bloody hard work. Everything God provides for us is allowed for our salvation, to aid us in our repentance. To teach us that our own efforts are subordinate to His. That our plans are subordinate to His timing. That even the spans of our lives are to give us time to repent. To knock our egos down a peg, and to teach us to trust Him.

That’s why God gave me this land.

Cursed be this ground, for my sake. Both thorns and thistles shall it bring forth for me. Out of the ground was taken. Of dust I am. And to this dust, this cursed hillside, may I return.

Published in Christian Living and Go And Build