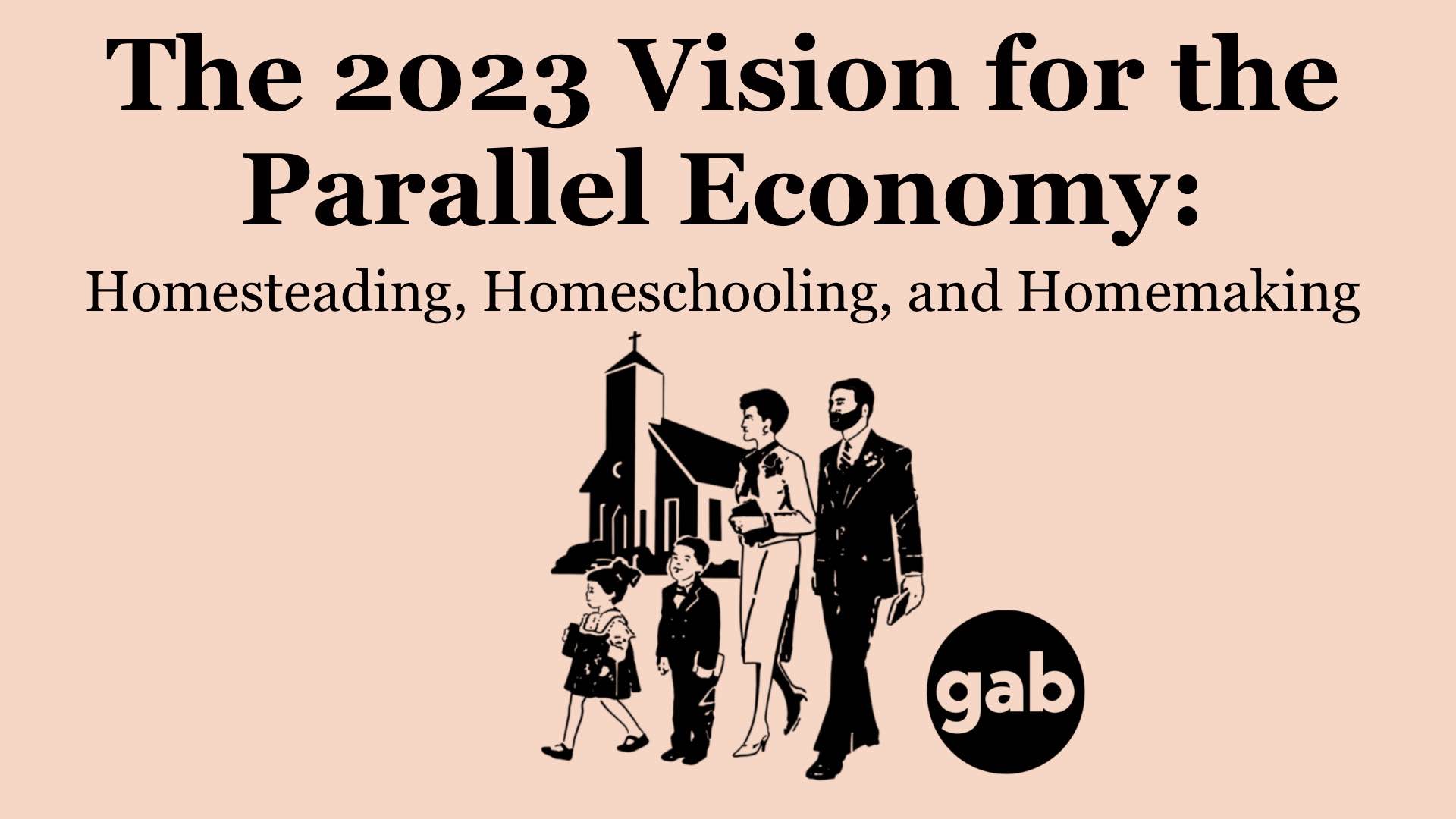 Our 2023 Vision For Gab and The Parallel Economy

I’m done wasting my time, energy, and focus on a rigged system led by blackmailed degenerates who supposedly represent us. I’m done caring what the spineless godless cowards and grifters on both the political left and the right have to say because at the end of the day they are all liberals in one form or another whether they realize it or not. I look back at all the time I invested in national politics over the past few years and can’t help but come to the conclusion that there are far better uses of my energy.

It’s time to accept the reality that America is already starting to balkanize and that the wicked American Regime will inevitably fall under the righteous judgement of God. There are no political solutions to spiritual problems and America is undoubtably a spiritually dead nation.

Our love of God is what made the United States united from its founding. We removed God from the equation over the past several decades and now predictably there is nothing left to hold us all together. The only thing Republicans and Democrats in Congress seem to agree on is sending more of our money to Israel and Ukraine. Count me out. Rome is burning and it’s time for us to start organizing, preparing, and building anew instead of pontificating about national politics in the corrupt and fundamentally broken system that is liberal democracy.

Republicans need to recognize the stark reality that winning in 2024 is a pipe dream. With Democratic control secured in Pennsylvania, Arizona, and Michigan the fix is in and electoral victory is impossible at the Presidential level. I don’t care if it’s Trump or DeSantis, winning electorally without these states isn’t possible and it might not happen ever again. We didn’t fix what happened in 2020 and they did it again in 2022. Do you really believe they won’t do the same thing again in 2024? Fool me once shame on you, fool me twice shame on me. I won’t be fooled again.

We believe that building the Parallel Economy is the most important thing we can be doing instead of being distracted with the donor class dog and pony show that is national politics. We will be building the infrastructure needed for communication, commerce, education, networking, and information. This infrastructure will be built, owned, used by, and controlled by God-fearing Christians.

To be clear you can still post about national politics on Gab. Obviously nothing is changing with our free speech policy. I’m talking about myself personally and professionally here. National politics isn’t going to be a big focus of mine or of the Gab team. I will be focused on building real solutions, raising my children outside of the beast system, and worshipping Jesus Christ. I hope I can encourage you to do the same.

Our Responsibility To Be Good Stewards of the Blessings From God

God has blessed Gab with tremendous influence, reach, and a growing community of the greatest people on the internet. I no longer have any desire to use that influence and reach to prop up politicians who continually fail to cross the Rubicon or accomplish much of anything outside of fundraising on the outrage of good and decent people in this country and sending our money to foreign countries.

Instead I want to use the platform and reach that God has blessed us with to glorify Him by empowering others to speak freely and engage in commerce with businesses and people who share their values.

I want to inspire young men and women to get married and make babies. I want to encourage Christians to take dominion of their local communities and rise to positions of power across media, education, entertainment, and business. I want to focus on becoming a better Christian, a better leader, a better husband, and a better father while helping others to do the same. Finally I want to continue building the tools and infrastructure at Gab to make all of this possible at scale for tens of millions of people.

We Worship God, Not “Liberal Democracy”

As John Adams once said: our Constitution was made only for a moral and religious people. It is wholly inadequate to the government of any other. Our government, culture, technology, media, and education system is currently being run by usurers, degenerates, liars, crooks, swindlers, sheisters, and predators who reject and hate Jesus Christ our Lord and Savior. Until that changes, nothing else will. Change starts at home and in particular with the man in the mirror.

A society run by these wicked people is doomed to failure. A national political system rigged to “elect” these people into power is not a system worth defending. Democracy is not our god and liberalism is a cancer on the Good, the Beautiful, and the True. Both of them can and will crumble into ash for all I care. America was founded as a Constitutional Republic, not a “Liberal Democracy.”

There are few things I hate more in this world than liberalism. “Liber” means “free” as in the word liberate. The ideology of liberalism “frees” society and the individual from God and in return enslaves them to Satan and sin. Liberalism is unequivocally the single most destructive ideology in history and enabled one of the largest genocides ever with the murder of tens of millions of God’s precious children in the womb. Liberalism destroyed a millennium of Western society, culture, and homogeneity in about a century.

Lest we forget the wise words of Dr. E. Michael Jones: sexual liberation—which is a byproduct of liberalism—is political control. I pray everyday that God continues His righteous judgement on the failed ideology of liberal democracy and that one day very soon it will be thrown into the dustbin of history where it belongs.

We must accept the reality that we can’t control what the people “in power” are doing. We must accept the hard truth that we can’t even vote them out. All hope is not lost though. We worship the God who has total and complete power over everything. He has blessed us with the ability to influence and build our own families, churches, and local communities.

So that is what must do. We must build and be patient. Being patient doesn’t mean passivity. It means waiting on the Lord by placing our trust in Him while at the same time taking action to defend and preserve our families, faith, and way of life. Rome may be burning, but the fire is not out yet. When it is we will be prepared with our stable families, technology, communities, and the infrastructure needed to rebuild Western nations for the glory of God. Those who put their faith in themselves, in national politics, in politicians, or in anything other than Jesus Christ will be doomed to disappointment and failure.

As I wrote in our best-selling book Christian Nationalism:

We can and must reclaim and maintain our townships, school boards, and counties. Then our state legislatures. Then the entire nation. In order to do so we must exit the beast system completely and build our own parallel Christian society, lying in wait for their system to collapse which is when the Godly infrastructure we have built will fill the vacuum. We must support, start, and grow Christian-owned businesses. We must stop using the technology tools of the enemy and start building and using our own.

Christian Nationalists must build our own ark and sail to better waters. That’s what we are doing here at Gab: building a digital ark and empowering tens of millions of people to build arks for their families, local communities, businesses, and churches.

In many ways we are no different than the first century Christians. It feels like God is hitting the reset button on Christendom and we are being tasked with rebuilding the great Cathedrals which have been all but overtaken by the Synagogue of Satan. We will likely never see the completion of these new Cathedrals in our lifetimes, but by the Grace of God our kin will if we start laying the foundation today.

How To Fight Back

Our content theme at Gab in 2023 is going to be focused on producing, promoting, and elevating people and businesses who provide resources and information on: Homesteading, Homeschooling, and Homemaking. We are working towards building a digital Christian nation that operates in parallel to the corrupt American kingdom and its wicked culture. That kingdom is not ours. It will fall. It’s time to start acting like it and building for the glory of God’s Kingdom. We hope you’ll join us.

I know I am not alone in this type of thinking because I’ve made many posts on this topic in recent months and these concepts are resonating with people who are disillusioned, disgusted, and demoralized with the state of things.

I’m here to tell you that a Parallel Christian Society is not only possible, it’s happening right now on Gab and in small communities across the nation. Do not despair. God is judging our nation, but we must remain His faithful and obedient children who keep the faith and trust Him even when times get tough. The time to repent and follow Jesus Christ is right now. Take the leap of faith and go all in.

To Him be the glory and honor and power forever amen.

Published in Gab and Parallel Economy