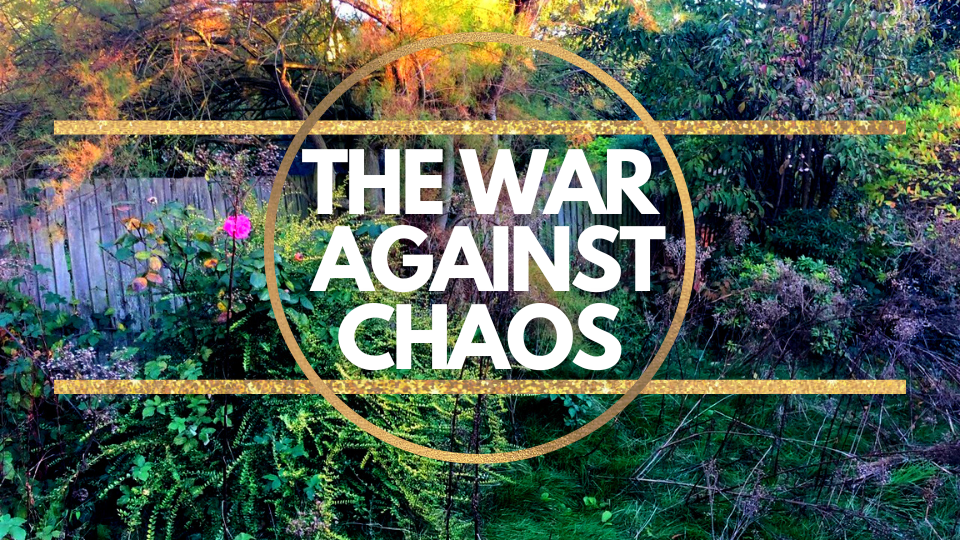 The War Against Chaos

I’m typing this out while I’m racked out in the back of my SUV in a Walmart parking lot in a college town, sipping a beer. I was attempting to spend New Year’s Day camping at the homestead, but my fan belt frayed out on the drive and ripped off the top of the dipstick. I assume that the fan belt is a delayed casualty of the sub-zero cold we had a couple of weeks ago, but I don’t know for sure. I do know I’m not going to risk driving home and having the belt completely fall apart.

Life is a war. Sometimes we win our battles, sometimes we don’t. We fight against the world to keep the faith, to hold families together, to pay bills, and to keep vehicles running. Often it seems that the war of a man’s life is simply an unending fight against entropy, Chaos, and decay. Especially if one drives an older vehicle.

Trying to start a homestead is another battle against entropy. God commanded Noah to take dominion over the Earth and commanded Adam in a similar fashion. Taking dominion means imposing order on the chaos, putting things into their proper place. The first acts of the Creation were acts of imposing order. Light was created, then separated from darkness. Sky, Earth, and Water were then separated from each other.

Homesteading is about order, and it’s also about creation. Turning wild grass into gardens, turning hillsides into terraces, turning trees into houses. It’s common to think of nature as being full of life, and it is, but it’s chaotic and unproductive life. It’s the job of the homesteader to rule that land, to impose order, and set boundaries so that life can flourish in a good way.

In ancient times, the word “symbolon”, from which we get “symbol”, referred to a practice by which an agreement was written on pottery and then broken. This was done so that each party had a piece of the “symbol” and the pieces could be rejoined to show that the agreement existed. “Symbols” bring things together to show an agreement and a relationship.

In Orthodoxy, we use ikons as symbols. The ikon represents a saint or event and thus helps to link us to our history, the saints, and to God. We don’t venerate painted wood any more than a soldier saluting his flag is paying respect to colored cloth. An ikon may be imbued by God with His Grace and do something miraculous, such as stream myrrh, but it’s never the wood itself that does it.

The opposing word to “symbolon” is “diabolos”. It means to separate things. It’s where we get the word “devil”, by the way. It’s also pretty much the devil’s MO: He separates us from God, from each other, and from the natural order of things. Adam was evicted from the Garden of Eden and forced to live on cursed earth. Mankind slowly disintegrated from one couple living in harmony with each other, nature, and God to billions of people who ignore each other on the street and occasionally throw fission bombs around.

Of course, the only real antidote to Chaos is to draw close to Christ, and to be of one mind with each other, as Christ and the Father are of one mind. In a monastic setting, the monks choose to be strictly obedient to their Abbot, while married laity are supposed to be strictly obedient to each other. A marriage counselor will speak endlessly about the necessity of good communication, but that’s only a means to the end of one being fully in step with the other.

I’m wrapping this up a week later in a different Walmart. I ended up troubleshooting the fan belt issue to a failing power steering pump. That repair work led to noticing a screw embedded in a tire, so it feels like I’ve come full circle.

Over the last 15 years, I’ve developed a strong foundation of mechanical skills that allows me to handle a lot of vehicular chaos. God has blessed me with some excellent teachers, and a vehicle that’s not really that hard to work on. With practice, experience, and a lot of research, I’m pretty confident in my ability to keep our vehicles running.

If only I’d spent the same amount of effort developing a spiritual foundation. My profession has forced me to develop my mechanical skills, but I never focused on spiritual discipline in the same way. I often feel like I’m, if not spiritually adrift, then only anchored with a fishing line. I mostly rely on the people around me to keep me on the right path, but if they’re not around, my life falls into Chaos really fast.

I can learn just about everything about turning wrenches or building a homestead from the internet. There’s almost certainly a book on whatever I need to know, and there’s probably a walkthrough video on YouTube. So I spend a LOT of time and effort doing just that, and yet all that knowledge wouldn’t help me unless I went out and applied it to my vehicle with my hands. And it is to my shame that the exact same things are true about Orthodoxy. There are thousands of books to read, endless lectures to listen to, and videos to watch. But all that knowledge rattling around in my head won’t matter unless I put in the effort to apply it to my own life.

Liberalism, as Met. Jonah phrased it at last year’s Orthodox MontaNiKa conference, is “anti life.” It has not simply infected the modern world, it created it. The systematic destruction of the family, of the religion-centered social order, of the God-ordained monarchies, all of it led not to an improved order, but more and more Chaos. And in every form, Chaos leads to death.

God isn’t simply pro-life in the Abortion debate, God is pro-Human Life. A full, healthy, Eternal life, lived in full communion with not only God, but each other, and with nature. There are numerous historical saints who lived in communion with the local wildlife, and in some cases, the local wildlife lived peacefully with each other at monasteries.

It’s up to us to return to that life. We’re the ones who have to repent and return to God. And not just in some hippy-dippy (Satanic) “Jesus loves you just the way you are” way, but by taking up our crosses and applying what we know at every opportunity until that Faith truly becomes our foundation. It’s up to us to resist the modern world and all of the chaos that comes with it.

This is our war.

J. Pilgrim is a, mostly, internet anon and actual Homesteader, carving out a future for his family in the woods.