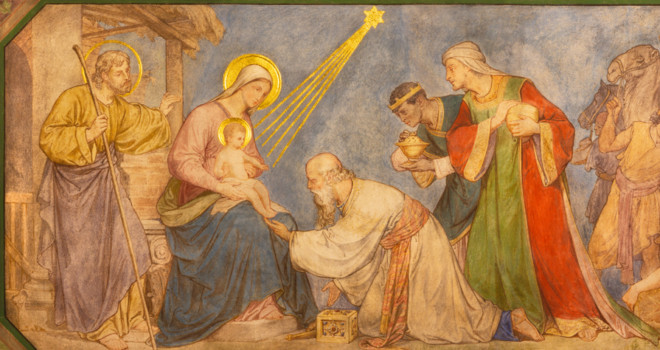 Many Christians do not celebrate Christmas viewing it as a pagan Roman Catholic holiday while others do but focus on celebrating the incarnation of the God-man – Jesus Christ instead of talking about Santa Claus.  Many modern Jews around this time of year scoff at Christians for holding the doctrine of the incarnation or teaching that the Messiah is divine having eternal origins.  They insist that Christians have “invented their own religion separated from the OT Scriptures and Jewish traditions.”  They insist that they have taught all along that Messiah is to be a mere man.  Is this true?

They also mock Christians for ignoring that Jesus taught His Second Coming would take place in the first-century generation (Mt. 10:22-23; Mt. 16:27-28 and Mt. 24:27-34) and therefore, was a false prophet.  Space forbids a detailed dive into these subjects, but we can begin to scratch the surface by addressing some key texts and what Jewish tradition has taught concerning the eternal origins of the Messiah and Jesus’ claims.

The complexity of the God-head existed in the OT before we even reach the NT and the Christian view of the Trinity emerges.  If the Scriptures said that no one could see God and live (cf. Ex. 33:20), how is it that these same Scriptures taught that people saw Him on the earth (and didn’t die) while at the same time He sat enthroned in heaven running the universe?  Didn’t God come in human form, even talking and eating with Abraham, wrestling with Jacob, and leading the armies of Israel?  How was God in heaven seated on His throne ruling the universe while at the same time being in the form of a man doing all of these things?  The Jews debated and struggled over these issues.

Before examining the Gospel of John and John’s description of Jesus as the “Word,” let’s once again try to get the Jewish cultural and contextual understanding of “the Word” before the Messiah even comes into the world.  In the Aramaic Targum (their translation of the Hebrew Scriptures which was read in the synagogues), the “LORD” is substituted with the “Word” or “Word of the LORD” in the following passages:

And watch this comparison of Genesis 28:20-21 and the Targum. This is Genesis:

This is the Targum:

Clearly, we have seen that belief in the “Word” is what justified Abraham, and here it is the “Word” that was Jacob’s God!

Philo and the “Word”

I could go on and on and make comparisons and contrasts between Philo and John’s gospel, and Philo with the writer to the Hebrews (along with some Pauline Epistles), concerning this same terminology and how each are wrestling with how the divine Logos of the OT LXX breaks into the world of men.  It seems that John and the writer to the Hebrews are very familiar with the OT LXX understanding of the Word / Mediator motifs and of Philo’s use of the Logos.  They are just explaining HOW this divine being (God) has entered into the world of man as a superior mediator than that of Moses or Philo’s impersonal philosophical Logos.  God had revealed Himself as the Angel of the Lord and through human theophanies in the OT, but now He has entered in a more personal and redemptive role through the virgin birth and incarnation.

As God’s plan of redemption is unfolding, there is now more clarity on WHO the “Word” has been all along – Jesus, the eternal Word/Son of God.  It is through Him (the Word) that all was made (just as in Jewish thought), except now the Word became a man/flesh and dwelt among us.  But even this is not completely foreign because in the OT Scriptures God was seen as a man upon the earth (while at the same time somehow fully Spirit enthroned in heaven ruling and maintaining the universe).  The Word/Son of God revealed Himself (theophany) in the form of a man to Abraham, Jacob and Israel prior to his incarnation.

John 1:14 literally reads that the Word (in the previous context, stated to be God) “lived in a tent” or “pitched his tent” among us just as Jehovah pitched his tent in the forms of the tabernacle and temple in the OT and dwelt in His glory among Israel.  Here again, God’s presence was both on earth and in heaven at the same time.  When God’s presence filled the OT tabernacle, His “glory filled it” (Ex. 40:34-35), and now John says that we have seen His “glory” full of grace and truth.  God fills His Son/the Word and through Him all things came about, and in Him is the exact representation of His being (Heb. 1:3).

“Therefore, the Lord himself will give you a sign. Behold, the virgin shall conceive and bear a son, and shall call his name Immanuel” (Isa. 7:14).

“For to us a child is born, to us a son is given; and the government shall be upon his shoulder, and his name shall be called Wonderful Counselor, Mighty God, Everlasting Father, Prince of Peace. Of the increase of his government and of peace there will be no end, on the throne of David and over his kingdom, to establish it and to uphold it with justice and with righteousness from this time forth and forevermore. The zeal of the LORD of hosts will do this” (Isa. 9:6-7).

OT scholar Michael Brown points out that there is no Hebrew word that specifically and always means “virgin,” not almah or bethulah.[8]  But one of the world’s leading Semitists, Dr. Cyrus Gordon, who claims to be Jewish and does not believe in the virgin birth of Jesus as Messiah, maintains that Isaiah 7:14 may be translated as “virgin.”[9]  And a famous Rabbi, Rashi, while not holding to a virgin birth in this passage, nevertheless pointed to the view that perhaps this girl was so young that she was “incapable of giving birth.” So, he is at least proposing some kind of miraculous birth of the “God is with us” son.[10]

The miraculous nature of this virgin birth and the son to be called “God with us” can be more clearly seen and solidified through appealing to how the Greek Septuagint reads, “Therefore the Lord himself shall give you a sign; Behold, a virgin [PARTHENOS] shall conceive, and bear a son, and call his name Immanuel” (Is. 7:14).  Parthenos is used 15 times in the NT and it never means anything other than a virgin.  The LXX use of partheonos “…would suggest that already before the NT age at least some Jews had come to link the passages in Isaiah 7:14—9:6-7 together and to deduce that there would be an additional, longer-term fulfillment of the birth of a messianic king, portended by a more supernatural conception…”325

In addressing Isaiah 9:6-7, Dr. Brown points out that the early Targum and Jewish belief of this passage was understood to be Messianic:

“The Targum, while explicitly identifying this as a messianic prophecy, renders the verse in Aramaic with an interesting twist, “…and his name will be called from before the One who is wonderful in counsel, the mighty God who exists forever, Messiah, because there will be abundant peace upon us in his days.”[11]

And there was some consensus that all the names refer to the Son/Messiah and not God (Rabbi Franz Delitzsch, Abraham Ibn Ezra, statements in the Talmudic and Midrashim writings), which would be consistent with the natural ancient coronation ceremony (e.g. by the Egyptians) – applying these four throne names to the new King.[12]

Therefore, we are getting further confirmation of the divine nature of the Immanuel Son of Isaiah 7:14. The virgin birth explains how the Messiah would and could be from eternity (the Jewish concept of the “Word”) and a “divine human” who was both “Son of Man” and the Ancient of Days coming upon the clouds worthy of worship (cf. OG LXX Dan. 7:13-14).  Other views of Daniel 7:13 see Messiah as a younger Ancient of Days or having the concept of the “two powers of heaven.”  Before looking at other developments of Daniel 7:13 within Judaism (which we will cover in Part 2 of this series), let’s look at one more Messianic text associated with Jesus’ birth and identifying just who He was prophesied to be.

In Matthew 2 we learn Jesus was prophesied to be born in Bethlehem in fulfillment of Micah 5:2.

“But you, O Bethlehem Ephrathah, who are too little to be among the clans of Judah, from you shall come forth for me one who is to be ruler in Israel, whose coming forth is from of old, from ancient days” (Micah 5:2).

Like Isaiah 7:14/ 9:6-7 and Daniel 7:13-14, Micah 5:2 was Messianic and predicted a Messianic King “whose goings out are from aforetime, from ancient times [or, ‘from days of eternity’]. Like Isaiah and Daniel, Micah 5:2 shows that Jesus was not understood to be just a man:

“The Targum of the Minor Prophets very explicitly takes this text as Messianic: “And you, O Bethlehem Ephrathah, you who were too small to be numbered among the thousands of the house of Judah, from you shall come forth before me the anointed One, to exercise dominion over Israel, he whose name was mentioned from of old, from ancient times.” (All translations from Targumim of various minor prophets are taken from Cathcart and Gordon 1989. The italicized material reflects changes from the MT here and throughout quotations from the Targumim of all the OT books.) The title “the anointed One” denotes the messianic king…[13]

This Christmas when someone claiming to be Jewish tells you that your belief in and celebration of an eternal divine Messiah/Jesus is “not Jewish” or is a formation of “a new religion,” you can demonstrate how Jesus and the NT authors were consistent with Jewish expectations of an eternal and divine Messiah.

In Part 2 we will continue to look at passages that demonstrate Messiah would be divine and eternal, but this time associated with Messiah’s coming upon the clouds in judgment (Dan. 7:13) or what Christians refer to as His Second Coming (Mt. 24:30; Rev. 1:7).  While addressing this passage and subject, we will also take the time to look at another “Jewish” criticism of the NT and that is Jesus’ Second Coming allegedly was not fulfilled in the first century “this generation,” or “shortly” and “soon” (Mt. 10:22-23; Mt. 16:27-28; Mt. 24:27-34; Rev. 1:1, 7; 22:20).  It is charged that these passages prove Jesus was a false prophet.  But as we will see, these passages not only prove He is a faithful Prophet, but they bear witness that He is very God – the OT cloud rider.  This two-part series will strengthen your faith in Christ (the eternal God) and equip you to answer a fool according to his folly.  Stay thirsty my friend (Ps. 42) and I’ll see you in Part 2.