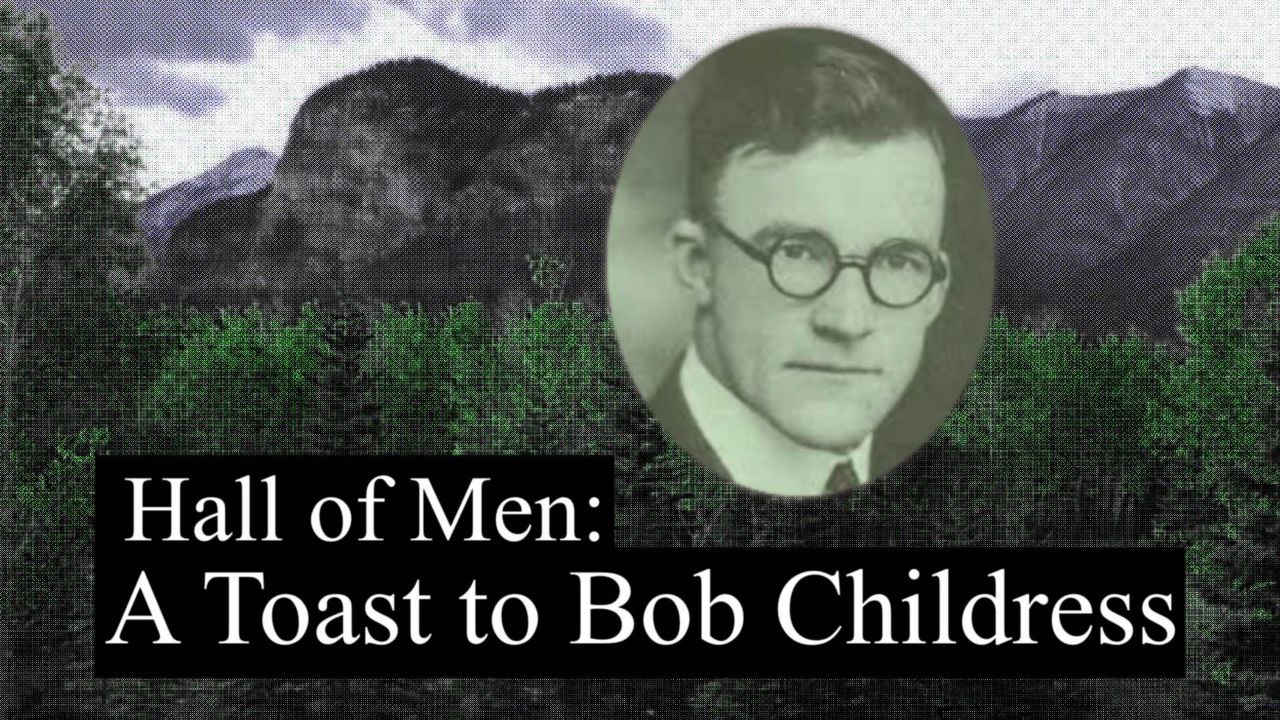 Hall of Men: A Toast to Bob Childress

The Hall of Men is a local fellowship of Christian men and sons in South Carolina who gather every other month to break bread and toast their heroes. We laud and remember the saints of old while extolling the grace of God with strength and zeal. We eat, we sing, we verbally spar. Protestant, Catholic, and Orthodox men engage in vigorous, non-“lowest common denominator” ecumenism. After the meal, one brother gives a 15-minute speech in honor of a great saint, at the conclusion of which the men hoist their steins to heaven and cheer the work of God through that man’s life. Below is a recent Hall of Men toast given in honor Bob Childress, the Presbyterian mountain preacher whose story is told in the book The Man Who Moved a Mountain.

If you look around the walls, you’ll see photos of men who have been toasted here in years past. Great, honorable men. Many of them well-known. Lewis and Tolkien and Chesterton and more.

Tonight, we will toast a great man and honorable man. But not a well-known man.

Tonight, we toast Bob Childress. And in so doing, we will raise our glasses to obscurity. Unseen faithfulness. To the common man. To toughness and grit. To loyalty and love. We’ll toast to the power of the Gospel to turn the hardest men and the hardest hearts to Christ. To change the habits and history and culture of a particular place.

Bob Childress was born dirt poor in 1890 in The Hollow just across from Buffalo Mountain in the Blue Ridge Mountains of Virginia. [1] Buffalo Mountain stood a thousand feet higher than the surrounding hills, cut off from the rest of the world by rugged terrain, lack of suitable roads or crossable bridges. And the people of Buffalo Mountain kind of preferred it that way.

Bob’s earliest memory was Christmas at three years old—he got drunk. When the adults noticed, they told him to go outside but he was too drunk to find the door. He tripped on his nightgown and hit his head and it knocked him out to sleep. At some point in the night, he lost his clothes and woke up naked as a jaybird. But the adults weren’t upset. It was fine, just fine, to be drunk, they said.

Drinking made life bearable in the Blue Ridge. They didn’t have much, but they did have apples and corn, which, with a little wizardry out in the woods, they could turn into brandy and whiskey.

Buffalo Mountain was known for two things: stilling and killing. That is, making hard liquor and shooting people.

The money was just too good and the product too easy to make. Bootleggers would source their liquor on Buffalo Mountain, dilute it 50/50 with water, and add ginger root or cayenne pepper to it to make it bite like normal. Both stillers and bootleggers all made lots of money.

But the whiskey and the guns didn’t mix. Lots of people died… and died young. Fights were regular. Shootings, too. The first $5 Bob Childress ever made he used to buy a pair of pants and a .32 revolver.

One day, after playing poker and drinking liquor for hours, he found himself six miles from home and within earshot of singing coming from a Methodist Church revival service. He went in and eventually knelt at the altar to pray, and rest came over him. Peace, for the very first time. That night, he slept like a baby without even a sip of brandy. The next morning, he left off his pistol. Didn’t even want it on him.

Now, I’ll pause the story here for one moment to make a note about whiskey and guns. In Bob Childress’s story, alcohol and guns are villains. But I don’t believe it’s because they are inherently bad. Rather, strong drinks and guns are dangerous gifts from God. With wisdom and faith, they can be used for good. But faith and wisdom were in short supply on Buffalo Mountain. And they misused both their whiskey and weapons.

And that’s how the Courthouse Massacre came to be. On March 14, 1912, at the courthouse in Hillsville, some mountaineers rode into town to secure the release of a friend. They came shooting in the courthouse and by the time they left, the judge, the prosecutor, a witness, the sheriff, and a juryman all lay dead, bleeding out on the courtroom floor.

Newspaper reporters flooded the town. And this was when Bob Childress learned that the Blue Ridge’s stilling and killing way of life was not normal in other parts. And he determined to do something about it.

He tried law enforcement but soon concluded that was impotent to change the culture of the mountains. After attending a Presbyterian church, he realized only the Gospel could change people. So, he set out to become a preacher.

But he wasn’t learned. He needed schooling. So, the very same year his oldest son started first grade, Bob went back to school. They rode a mule together the six miles to the school. Within a year he was off to Davidson College, where he spent one year, and then on to Union Seminary in Richmond. With his wife and five kids in tow.

But with only one year of high school and one year of college, he was turned down for admittance. “We have to keep up our standards,” they said.

“Is there any rule that would keep me from getting my own house and just going to classes?”

There wasn’t, and so he did. God provided in some tight financial situations, and over time Bob became a star student and was eventually admitted into the seminary as a regular student, given a scholarship and housing, and invited to preach all over Richmond.

After graduation, he was offered a cushy pastorate in North Carolina. It came with a nice salary and a car. But Bob Childress wanted to go back to Buffalo Mountain.

He loved his people and his place. He wanted them to hear the Gospel and be changed. He wanted to civilize Buffalo Mountain.

He got the opportunity. And he made the most of it.

Bob Childress was convinced that he would need to live among the people of Buffalo Mountain to make any dent. He needed to eat with them, work with them, and be with them. They needed to see his family.

But that meant putting his family in harm’s way. They would have to live amongst the stilling and the killing. And they did.

Bob was easy to get along with. He was big and gregarious. Told jokes, smiled, spoke directly and kindly. Always willing to help. Always visiting. Always sharing a meal. Always giving away his stuff.

On Buffalo Mountain, he started churches and schools all around. He lobbied for decades for roads and bridges. He worked to establish an alternate economic opportunity for people, so they could give up the liquor trade. Something just as profitable, but not as dangerous.

He imported cattle (they died), established a sawmill (it sustained the community throughout the Great Depression), and finally got some decent roads constructed.

He made friends with the toughest men on the mountain: Giles Harris, Bailey Goad, Grant Massey, Mack Miles, and others. He shared meals with them, spoke Scripture to them, invited them to church, and invited them to trust Jesus. Often, they would come to church but refused to join.

In their minds, that would mean giving up liquor and making vows. Vows were serious things, not to be taken lightly.

One day, while preaching, Bob said, “Let the Lord cure your soul first. Then you can start to work on your drinking.” When he gave the invitation, Giles Harris, the most dangerous man on the mountain stood up. Nobody knew whether he was leaving or coming to the altar. It was the latter. And fifteen hardened men, including Giles Harris, trusted the Lord that night. Giles later became an elder.

It was said that Bob worked like a man running from the devil… or after him. He preached in 4-6 churches each Sunday. In cabins or schoolhouses or wherever. He’d show up in his Model-T and greet everyone with smiles and jokes. But afterward, he’d always leave in a hurry. One, because he needed to get to the next church; and two, he hated long goodbyes.

He drove an average of 40,000 miles a year visiting people and preaching and starting schools and attending to duties.

In 1929, Bob’s church built its first permanent church building on Buffalo Mountain, a beautiful rock building. He’d build six of these throughout the mountains. Spiritually, things were going well. He was starting to see some changes.

Then, a murder-suicide happened when one man’s wife left him. He shot a customer, and then himself. Bob’s son found the bodies.

Bob also faced opposition because he was upending the current ecosystem, most notably the bootlegger business, but not just that. He was also confronting sin and pointing out the responsibility of the older folks for not teaching the younger folks how to live a better life.

He’d been doing that since he first arrived back on the mountain. His first test was a funeral where a young man had been shot. He straight up told them it was their fault. It was their drinking and their anger. But mostly, it was sin. They needed God’s grace.

He’d have other tests even after he’d been there decades.

One day, he was driving along when a group of young, drunkards jumped out on the road to stop him. But he immediately got out of the car, grabbed the ringleader by the collar, and threw him in the car. Then, he drove him home. Later, it occurred to him that he had forgotten to thank God for his safety. But he also thought that it had never occurred to him to be scared. Bob Childress knew that it was the man who took immediate action that controlled the situation.

But he was scared one time when another group carjacked him. They told him they were going to kill him. He said, okay, but let me pray first. He knelt down and prayed aloud fervently for these men and their eternal souls and for their families and for everyone on the mountain who had never been taught to love. By the time he said Amen, they had put their knives away.

He offered them a ride home.

Eventually, Bob had a stroke and slowed down… but just barely. He kept preaching in multiple churches, even as his health failed.

He went one day to preach at the black church a couple of towns over. The singing was the best he’d ever heard. So, he took the choir to the church up at Bluemont and began working to integrate the churches.

Then, three days shy of his 66th birthday, he had a heart attack and was dead. Just like that. He never did like long goodbyes.

One man remarked after the funeral: “He gave most of us… all the upright we ever knew.”

Jesus said it takes only the faith the size of a mustard seed to move a mountain. By faith, Bob Childress moved Buffalo Mountain.

By the grace of God through the Spirit of God working through Bob Childress, God Christianized Buffalo Mountain.

And so tonight, we toast a man:

To Bob Childress, the man who moved a mountain!

[1] The life of Bob Childress is recounted in The Man Who Moved a Mountain (Davids, Richard C. Fortress Press, 1970). This essay was composed overwhelmingly with material from this book.

Rhett Burns is a pastor and small business owner in Greenville, SC. He is a regular contributor to the Fight Laugh Feast Magazine. Follow him on Gab at @rhett_burns.