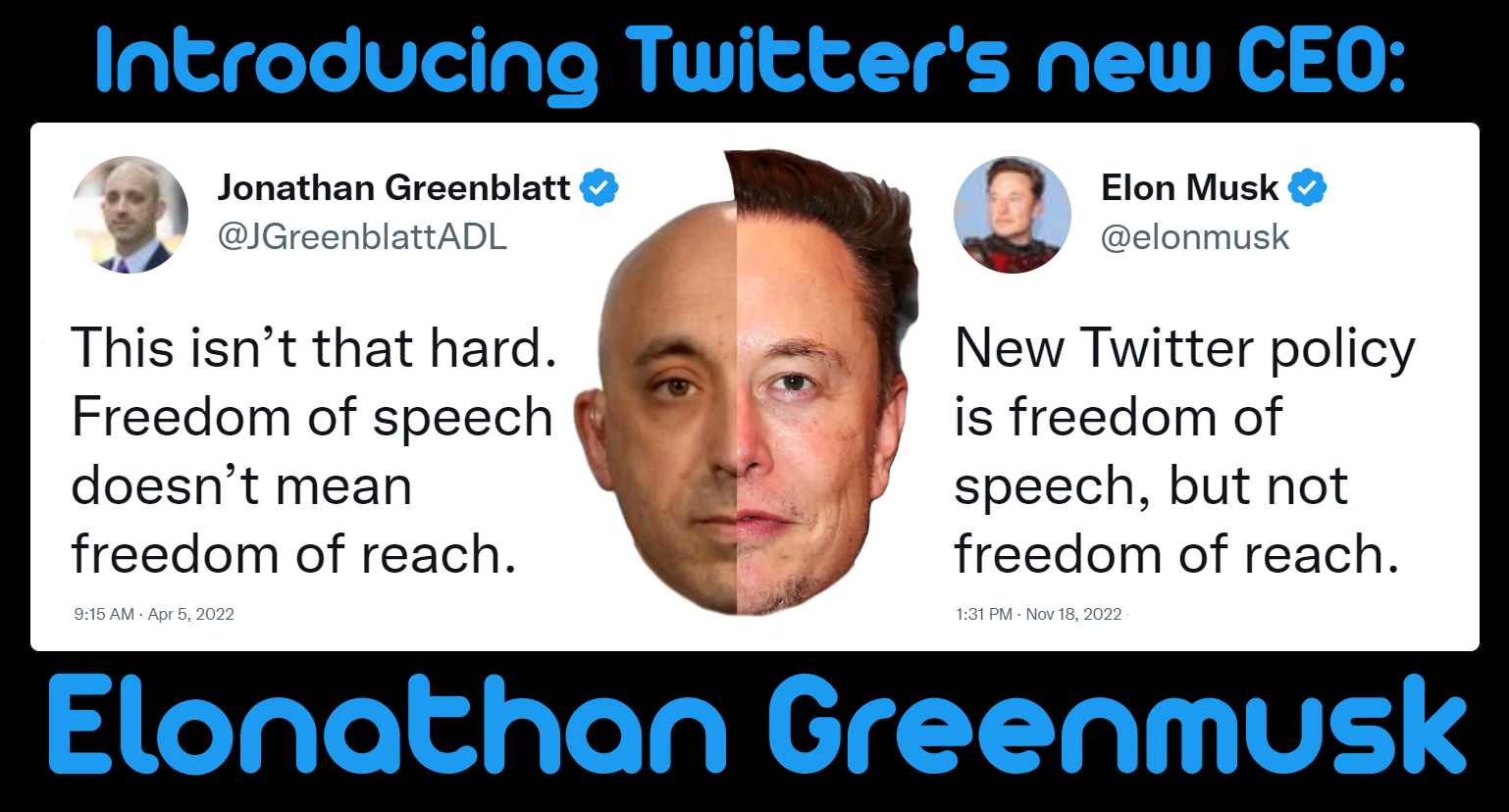 “This isn’t that hard. Freedom of speech doesn’t mean freedom of reach.” – Jonathan Greenblatt, CEO of the ADL 4-5-22

Every now and then someone new comes around and claims to support free speech. I do my best to give you my analysis of the situation objectively. This is often difficult to do in my position as the CEO of Gab because so many people dismiss my insight as “envy” or “fear” when in reality I’m just doing what I always do and calling it how I see it. I don’t say this to be braggadocios, but as a matter of fact I am the foremost expert in the world when it comes to free speech online and so my opinion on these matters holds weight.

I’ve spent six years building the only platform on the internet that upholds First Amendment-protected political speech as the baseline for what is allowed to be posted. I’ve paid the price for this policy, getting banned from App Stores, banks, payment processors, hosting providers, and dozens of other services. No other platform can make this claim, certainly not Musk’s Twitter.

Nothing has changed at Twitter and based on Elon Musk’s tweets over the past month nothing will be changing anytime soon. People who have been banned in the past have been given amnesty only to return to shout into the void. Folks like Alex Jones aren’t welcome back at all not because of specific policy violations, but rather because of Elon’s emotional reaction to him on a whim. The Twitter rules have not changed. The shadowbanning has not ended—in fact Musk is openly tweeting that “negative” and “hateful” content will be “deboosted” and celebrating that “hate speech” is being removed from view in record numbers. These are the facts.

The reasoning for all of this is that Twitter’s policy is now “freedom of speech, but not freedom of reach.” This is the same policy that vampire demons like Jonathan Greenblatt at the ADL have been trying to normalize for years. The policy is contradictory on its face. The entire point of freedom of speech—of speech in general—is to reach someone. Freedom of speech cannot exist in a vacuum.

The Jews did not want Jesus killed and eventually have Him crucified (John 5:18, John 7:1, John 8:37, 1 Thessalonians 2:14-16) because He spoke to Himself alone in the corner. They did so because He was reaching people and making fools of the Jews in power by exposing them as hypocrites. His speech grew His ministry precisely because it reached people. Jesus could not have done this if He was simply talking to the wall.

Another classic historical example is Socrates. Socrates was not put to death for muttering to himself alone in his house. He was out and about in the city engaging in “harmful” and “dangerous” discussions with people. He challenged the public by daring them think and question their assumptions about their culture, leaders, and society. He couldn’t “corrupt the youth,” which is what he was charged for, if he didn’t reach them with his speech.

Freedom of speech necessarily includes the freedom to reach someone else with that speech. Freedom of speech without freedom of reach as a policy on Twitter is worse than having your Twitter account suspended. At least when that happens you have a sense of achievement that what you were saying mattered and made an impact. So much of an impact that you had to be ejected from the platform completely.

Freedom of speech without freedom of reach is the ultimate form of demoralization.

It is psychological warfare on your mind.

You keep posting and stay hooked on the platform—making Mr. Musk plenty of money from your usage—but your posts go unseen by anyone but yourself. You are allowed to speak but no one can hear you.

The 2014 Black Mirror Episode “White Christmas” illustrates what Elon Musk’s Twitter will be like for dissidents and anyone that poses any real challenge to the Regime. In the episode we are introduced to a “blocked” technology in the real world. Blocking causes people to see each other as grey silhouettes and prevents them from communicating with other people. In other words when you are blocked in the Black Mirror world you have freedom of speech, but no one can hear you so you reach no one.

This isn’t a world I want to live in. I don’t want a Godless technocratic transhumanist deciding who can be heard and who cannot so that he can dig his way out of the $44 billion dollar hole he dug himself into. The sad reality is that none of this bending of the knee will appease the Regime machine. Elon is about to find out the hard way what it really means to go up against the powers that be in this country. This is why I have never given these demons an inch and always doubled down on Gab’s free speech policies no matter what the cost. We will continue to build the home of free speech–and reach on Gab.com without apology and without compromise. We hope you’ll join us.