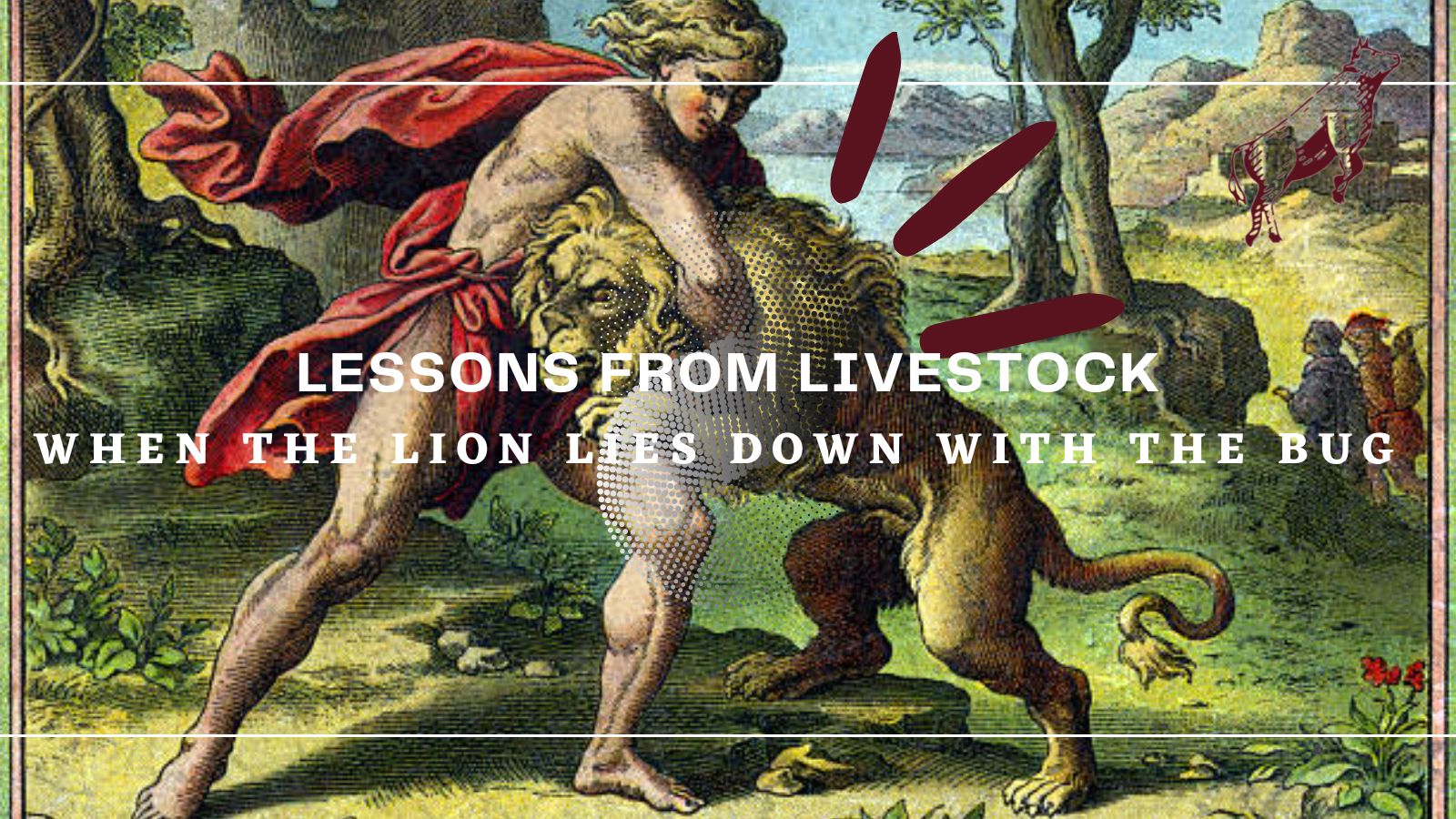 We’ve discussed the spiritual foolishness symbolized by pigs, the wisdom taught by eagles, and the dehumanization of bug “farming.” Now let’s do lions. From ancient days, lions have been known as symbols of unmatched strength and royal authority. This is true in Scripture, and that’s where things get complex.

The Lord Himself is the “Lion of Judah…” but St. Peter tells us that our “adversary the devil, as a roaring lion, walketh seeking whom he may devour.”1 The lion also roams through the Old Testament as a symbol of demons, enemy nations, kings, the nation of Old Israel, and the righteous who are bold when accused. But perhaps the most interesting lion is in the story of Samson – this lion is most relevant to our truck bro and to us.

A young lion roared against Samson while the hero went down to Timnah to claim his Philistine wife. But “the Spirit of the LORD came mightily upon him, and he rent him as he would have rent a kid [goat], and he had nothing in his hand.”2 Later, Samson discovered a beehive full of honey, in the carcass of the lion, and he told of this in a riddle to the Philistines: “Out of the eater came forth meat, and out of the strong came forth sweetness.”3

This doesn’t seem like the lion that the truck dude had in mind when he put on his sticker. However, it’s precisely this lion symbol that describes his attitude.

Think about how silly it really is for a man – any man, in the United States of America, to consider himself a lion. Why, because he can vote? Because he has a gun? Because he eats elk like Joe Rogan? (Nothing wrong with those last two things, for the record… but make us lions they do not.) These “lions” listen to optimal performance podcasts so they can up their game because they rely on their own strength – and in so doing, they unwittingly behave just like the government wants them to.

At first, this claim seems counterintuitive. The government wants people to be sheeple: docile consumers masked up units of quantity, hamstrung by taxation. Yes, but the government is also okay with you being a “lion.” The government has ample means of managing those whose personalities or circumstances make them more powerful and uses their desires to neutralize them.

Remember that the “government,” as I describe it, is much more than just the state. It includes schools, banks, and corporations, collaborating with the state to govern a population. This need not be a conspiracy — although it often is — it can simply occur because of a shared set of objectives and priorities. For the government to cooperate correctly with itself, it needs maximal data and predictability in the population.

That’s why modern governments exert an inverted form of pastoral power to promote vice. Greed, lust, and vainglory are very predictable: if you know that every merchant will do anything to maximize profit, then you can predict their trading patterns with precision. The “rational actor,” the utilitarian automaton, and the pleasure-maximizer are the ideal constituents of the modern population. This means we can expand Dr. E. Michael Jones’ well-known dictum that “sexual liberation is political control”4 by saying: manipulation of any vice is political control.

This is why the government is promoting Impossible burgers, even though the company loses money: they want to centralize all protein production. Impossible is a tool to nudge the population’s behavior through a desire for “meatiness” in food. The government seeks to steer the rudder of our vices until all protein comes from patented software and gene edits. They won’t even have to pass a law.

But what does Impossible Foods have to do with our “LIONS NOT SHEEP” truck-bro? After all, he probably grills boutique beef on a Big Green Egg. Again, there’s nothing wrong with the grilling itself; the problem is that he was sold the Big Green Egg. He was sold his nice truck, and he was sold his “LIONS” sticker. He was sold a personal identity as an independent man – a lion, superior to the sheep. What vice does all of this sound like? The worst one: pride.

You could say he has preferred pronouns: Lion / NotSheep.

From a Scriptural perspective, of course, this self-image is a vice. It is idolatry, and like all idolatry, it refutes itself: in pretending to be a lion, he becomes more of a goat. And it leads to death. He becomes the lion that the Spirit of the Lord, working through Samson’s bare hands, ripped apart like a kid.

St. Ephrem the Syrian writes that Samson, in that story, acted as a type of Christ, and the lion represented death, which Christ killed with no weapon except the humility and obedience of His cross. The Lamb killed the lion, for all eternity. The Lord Jesus Himself is the answer to Samson’s riddle: “What is sweeter than honey? And what is stronger than a lion?”5

A godly version of the bumper sticker would thus read, “SHEEP NOT LIONS.” Because he who is least among us shall be first, and those obedient to the King of all shall rule as heirs of the Risen Christ.

This is true in the Kingdom of Heaven to come. But is it also true right now? In America? Yes – because the government doesn’t want you to be that kind of a sheep.

Now, I mean sheep in a Scriptural sense. Sheep are the most frequent and potent animal symbol in Scripture: sheep are obedient. Sheep are offered in sacrifice to God. Their blood connotes holiness – a state of being set apart from the sinful world. Sheep are the Apostles who bear witness to Christ, their shepherd, even in the teeth of the wolves. Think about the history of the Roman Empire in the centuries following Christ’s Ascension: it was the Judeans who claimed to be lions, and their world was utterly destroyed in 70 AD. Meanwhile, the Apostles and their spiritual proteges, over the course of 300 peaceful but bloody years, conquered the imperium.

The Christian sheep of the first three centuries were certainly not pushovers – they boldly defied imperial orders to worship idols or the killing of other Christians. If alive in our time, many of them would have resisted lockdowns and jab mandates, and they probably would have grilled on Big Green Eggs, and many would drive a decent truck. But they never would have put up that bumper sticker or believed in their hearts what it implied. And that would make them (like it makes us) true threats to the regime.

The modern government has not ignored the lesson of imperial Rome. They know that self-styled lions are not a real threat to the system. The main weakness of pagan governments, from Rome until now, is sheep. This world’s rulers are incapable of exerting pastoral power on true sheep precisely because true sheep crucify their vices and selfish desires. This virtue is unfathomable to the government. Selflessness does not compute in their models, and selflessness cannot be steered by bread and circuses.

This is why the world’s rulers and the Devil’s servants work hand-in-glove. They share a similar goal: control of souls via vice, showing that the demons are, in fact, an element of the government. The more pride, lust, and greed that we practice, the faster we careen towards a dystopia of bug protein and Impossible Foods.

That’s how this lion will lie down with the bug.

The sad truth is that we’re almost there: Basic desires are being manipulated to replace livestock pastures with vats of transgenic yeast, which spill out fake blood in a technological simulacrum of a sacrament. It’s horrifying. But, when we look back at history, the eras are rare, indeed, when such horror didn’t lurk nearby.

And so, we can’t worry too much about it, can we? Worry and fear are more vices that the government can easily manipulate. The truth is that when we trust in Christ and prepare daily to sacrifice our own will and desires to the Divine Will, we become true, obedient sheep; and only sheep are ungovernable.

I want to leave you with a passage from St. Nikolai Velimirovic, concerning Revelation 17:14, a verse that we do well to keep in mind: “These shall make war with the Lamb, and the lamb shall overcome them.”

“Brethen, let us rejoice and be glad at the Lord’s victor over all the beasts. Lions and tigers, wolves and foxes, hyenas and snakes – the lamb shall overcome them! Who has seen and heard this? … The Lamb is Christ the Lord, and the beasts are all His adversaries, visible and invisible. In our day the Lamb carries the victories; in the future the Lamb shall conquer, even to the last day.

The Lamb conquered and conquers and shall conquer all the kings and rulers of the world with their bestial natures, their armies and their mercenaries, their glorifiers and their followers. …

O my poor brethren, be not afraid… be not doubtful… He is called “the Lamb” in order to teach us that we should be like lambs: quiet, meek, guileless, patient, ready for the victory-bearing sacrifice, and devoted to the will of our Shepherd. When God is with the lamb, then the lamb is stronger than the wolf, mightier than the lion, craftier than the snake and the fox…

The Lamb conquers and only the Lamb.

O Lord Jesus, King of Kings, Victor in all conflicts and battles, the Lamb of God, meek and merciful, make us to be victory-bearing lambs. “

David Treebeard is a man of letters, a barefoot gardener, and a crossbow deer hunter. When not writing for Gab News, he is feeding various animal species or rendering animal fat into immortal Pemmican with his company, Steadfast Provisions – also on Gab!