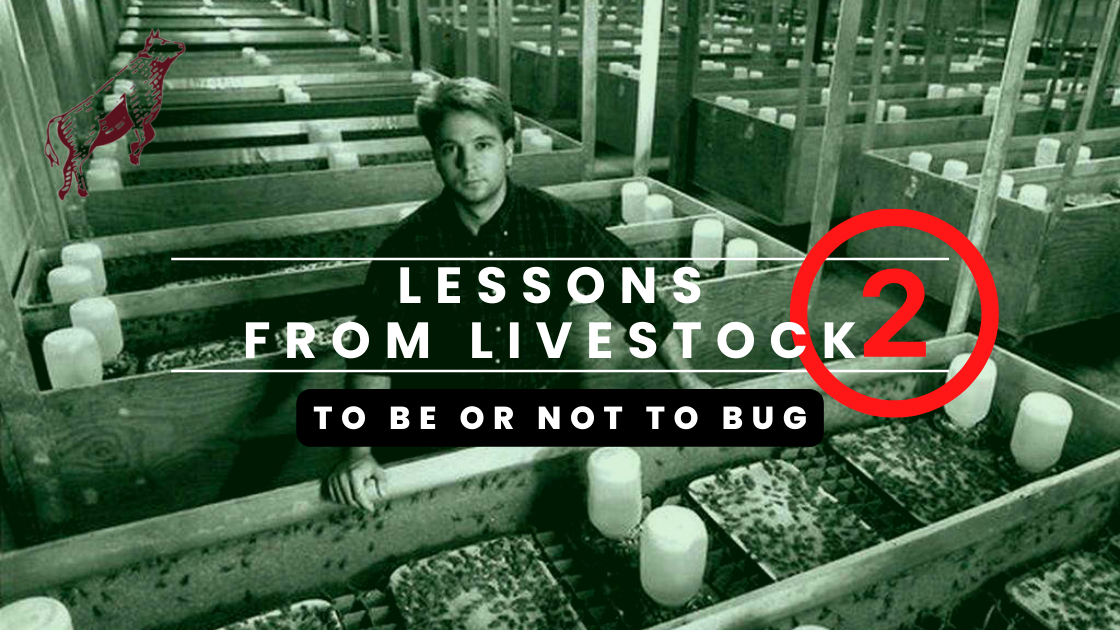 To Be or not to Bug

When animals become numbers, human numbers are not far behind. For the past several hundred years since the imaginations of Descartes and other enlighteners permeated our power structures, people have been treated as machines or numbers – abstract variables that can be subtly manipulated, to achieve certain goals. This is how the modern government exercises its power through an upside-down form of Christian “pastoral” leadership.

What if the way a culture treats livestock is an indication of how its political leaders will treat people?

In part one of this series, we saw how animals could be symbolic teachers for our spiritual development. Now let’s zoom out and look at livestock management – Farms, ranches, the modern abominations known as CAFOs, and even worse “developments” coming down the pipeline. These things should matter to you even if you’re not a farmer or have never thought about animal production. Why? Because animal husbandry is a potent symbol of politics. The predominant way that our society treats livestock symbolizes the same way our government will, ultimately, treat you.

All of nature is a symbolic curriculum presented to us by God. And humanity, too, is a part of natural creation, albeit a unique part. Humanity is designed as the crown of creation, a living connection between the Creator and created. This crown in our nature connotes dominion, but dominion entails responsibility for the rest of creation. That’s why it’s so heinous for humanity to be wasteful and cruel in its relationship with nature. It’s an abuse of power and denial of the purpose for which we are given existence.

In the Gospels, Christ tells us how to relate to our souls, God, and fellow men; He doesn’t say much about treating the non-human created world. But He doesn’t need to: how men relate to God and other men directly correlates to how they’ll be caretakers of creation. If we abuse natural creation, that’s a sure sign that our hearts neglect God and His commandments. The animals are not only symbols; they are tests. And the modern world is failing that test.

Rene Descartes, one of the founding minds of modern philosophy, famously considered animals to be mere machines; this is not a Christian view. A Cartesian robotic cow has nothing to do with a loving God. But Descartes’ thought was the foundation stone that defined modern livestock systems. This is why farms are reduced to factories: if animals are simply machines, why not make them part of an assembly line?

Machines can be reduced to interchangeable mechanical parts, quantitative statistics can measure their performance, and they can be tooled to do what is necessary. And they can be treated as though they have no sentient mind. A machine never feels claustrophobic; it can be repaired if it breaks.

Now replace the word ‘machine’ in the paragraph above with the word ‘pig.’ Or ‘cow,’ or ‘chicken.’ That’s what the Cartesian capital-chasing “farmers” (let’s call them “machinists”) of contemporary America have done, but when the reality of animality eventually asserts itself, the system begins to fail. That’s when the machinists try to fix the animals – they try to force reality to conform to their mechanistic ideal:

Oh, pigs go crazy and attack each other if they’re too crowded? Cut off their tails at birth so that other pigs can’t bite them off. Oh, chickens get sick when they never see the sun or hunt for bugs? Administer antibiotics when they’re young (bonus – it also makes them (and us) fatter). Technologies are gradually refined to help animals behave more like the machines the government believes and wants them to be.

When I say “the government” above, I mean more than the state. The government includes a whole range of institutions, including corporations, universities, and media organizations, all united by a shared worldview: a liberal, Cartesian worldview. A quantitative worldview that practices strange doublespeak: the government claim to secure liberty, and yet it insists that every aspect of life be included and accounted for in its knowledge base. This is obvious when we look at modern livestock production, which emerged from the collaboration between the state, corporations, and universities: Confined Animal Feeding Operations (CAFOs, or “factory farms”) are quantitative projects. Feed numbers go in; meat numbers come out.

When animals become numbers, humans as numbers are not far behind. For the past several hundred years, since the imaginations of Descartes and other enlighteners permeated our power structures, people have been treated as machines or numbers – abstract variables that can be manipulated to achieve specific goals. This is how the current system exercises its power through an upside-down form of Christian “pastoral” leadership.

The pastor, the shepherd of men, exerts a governing influence over his flock, seeking to influence the inner life rather than controlling people through external pressure. Christian pastors, taking Christ as his model, look after each individual soul in their flock, and must be willing to leave the 99 sheep to rescue the lost one. The Christian pastor must also, like Christ, lay down his life, his pride, his time, and his own will for the sake of his flock. The modern government has inverted the ancient tradition.

Modern pastoral power governs the population, a numerical abstraction, rather than any particular people. People are herded into city apartments (the word ‘apartment’ speaks volumes… ‘apart’ meaning isolated, and ‘ment’ meaning mind), where they can be watched and, through currency, accounted for. In this way, people are measured by their income, by their spending – by the numbers. The media apparatus celebrates the highest-producing animals in the factory: the “titans” of industry. Taxes, product sales, attention, and votes are farmed in an increasingly efficient centralized process. And all of this shows us: we are what we eat. And it’s getting worse.

A hilarious World Economic Forum article says, “Is it Racist to not want to eat bugs?”

Even if it were racist not to want to eat bugs, I still wouldn’t want to. Some fates are worse than racism. But racism isn’t the real reason we won’t eat the bugs. It’s not just that bugs are gross or that they tend to carry harmful parasites. The reason is much more profound: We are what we eat, and we don’t want to be bugs.

A bug is the closest thing to a unit of pure quantity in living nature, and they are much more amenable to being inserted into a factory system and treated as a machine than are mammals and birds. A factory-produced bug with standardized genetics and feed is essentially a number.

We don’t want to be reduced to pure quantity, and we don’t want to be faceless exoskeletons in metal pods. Nor do we want to continue sliding down the slippery slope of modern efficiency that intends to integrate our souls into a demonic hivemind. All of those statements are summarized thusly: “We will not eat the bugs.”

Furthermore, bugs aren’t even the bottom of the slippery slope. There is an even more unsettling development in our government’s schemes of protein production: fake meat.

Impossible Foods is grotesquely a fake blood company. They discovered a bacterium that grows on soy roots, which produces a compound called “Leghemoglobin,” which tastes a lot like the blood that gives meat its erstwhile inimitable flavor. They figured that they could inject this leghemoglobin into a substrate (made of wheat gluten, coconut, canola oil, and other food-like substances) and make it taste exactly like meat. Impossible Foods isolated a gene from the soy-root bacterium to manufacture enough leghemoglobin and spliced it into yeast brewed in giant industrial vats. Impossible Foods is brewing… GMO bacteria blood.

As a normal human being, you’re probably asking: “But… why?”

Impossible Foods’s mission is to eliminate livestock production by replacing real meat. They say animals create too much carbon dioxide and methane, they’re stinky, and our planet can’t afford to go on like this. This makes Impossible Foods more than a simple profit-seeking operation: the company is political and an element of the government.

Reducing meat consumption is a major goal of the government. Again, we must ask why. Is the point to “fight climate change,” to protect animal rights, or to reduce human vigor?

The answer is Yes, all the above — different reasons motivate different elements of the government. But there is also a more uncomplicated motive: efficiency. The government wants cheaper feed for its livestock, and that’s us. But wait, Impossible Foods aims for a “livestock-free” food system. Uh-oh.

As software becomes increasingly advanced, taking over more and more productive jobs, governments need fewer and fewer livestock to make their requisite profit. They are incentivized to downsize the herd.

Impossible Foods is a warning to us. It shows us where the logic of liberal materialism leads – to people being progressively dehumanized until there is no actual loss when they are sterilized or culled.

But the reality is quite the opposite. As we’ll see in this series’s third and final part, we need to be sheep.

David Treebeard is a man of letters, a barefoot gardener, and a crossbow deer hunter. When not writing for Gab News, he is feeding various animal species or rendering animal fat into immortal Pemmican with his company, Steadfast Provisions.