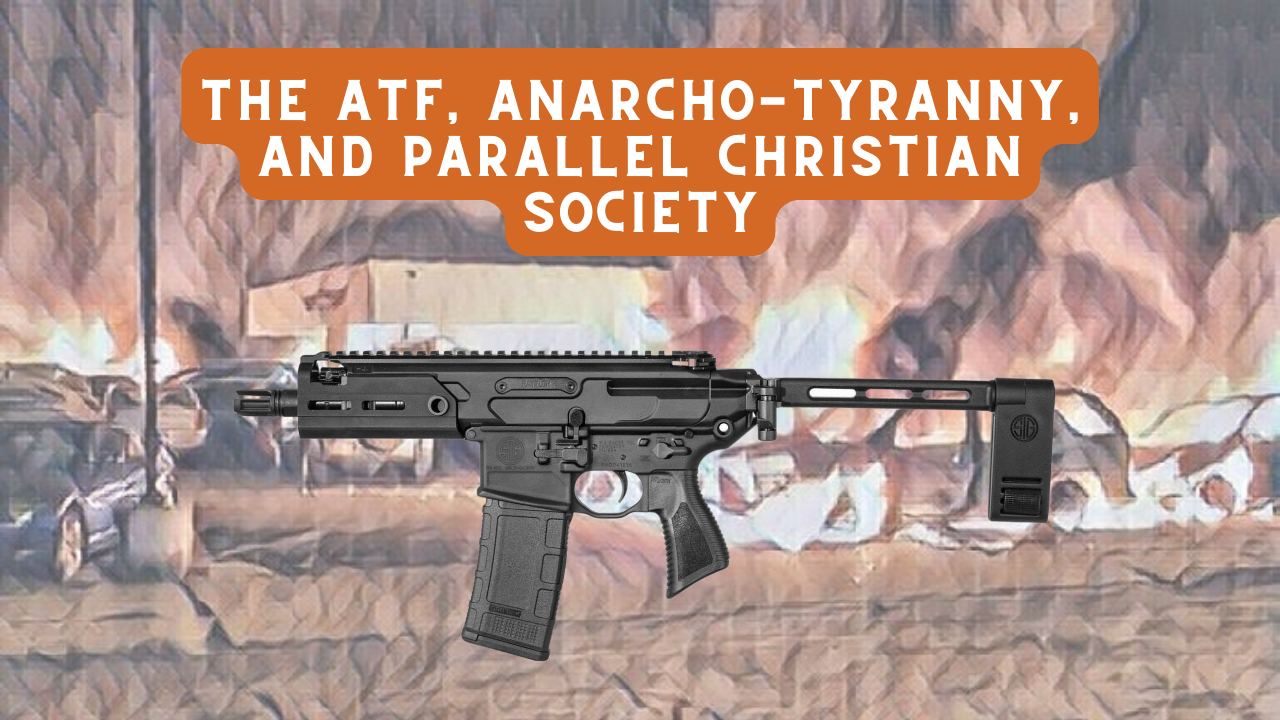 That the Administrative State and its organs, such as the ATF, even exist is an affront to the heritage of the U.S. Constitution and Anglo-Saxon common law tradition. The Constitution you thought we had no longer exists. Our form of government originates in Anglo-Saxon witans, which represented the nation as a whole and developed and enforced the common law as it was handed down over the generations. Having armies of parasitic bureaucrats responsible to no one decreeing their laws is far more akin to empires that lorded over innumerable slaves. It is not something a free people tolerate. But such is the American Total State. All of life is politicized and lorded over by unelected vermin.

And the point of the Administrative State in our decaying global empire is to enforce anarcho-tyranny. Look at the ATF, for example. Right now, America is facing the greatest epidemic of violent gun crime in decades (perhaps ever, as crime statistics are often underreported for propagandistic reasons). After the “mostly peaceful” anti-white race-hate riots of 2020, American police pulled back from actively policing high-crime urban neighborhoods. This was a matter of policy giving in to the rioters’ demands and out of officer self-preservation (what officer wants to be the next Derek Chauvin, sent to prison for decades for aggressively restraining the wrong overdosing felon at the wrong time?). As a result of the police withdrawal in these urban areas, black gun deaths and traffic deaths have significantly increased, as well as violent crime overall. Things have gotten so bad that the violent crime has begun to spill out of the major cities and even into sleepy farm towns, such as Janesville, MN, population of 2453 (and ten minutes from where I sit writing this).

You would think the agency dealing with illegal weapons would be all hands on deck mitigating the urban gun crime epidemic. And also the ubiquitous and very illegal Glock switches, regularly used in the commission of inner-city gang violence. But if you thought that, you would be dead wrong. The ATF is far more concerned with rural, white men owning AR pistols (for defense against criminals invading their home, no less!) than they are about dead black children shot in the head during drive-by shootings.

This is only hypocrisy if you don’t understand what is going on. The Regime and its Administrative State understand the fundamental rule of politics—politics is about rewarding friends and harming enemies. The ATF using its vast resources to investigate and prosecute the suppliers of illegal weapons used in urban crime, would reward its enemies and harm its friends. Allowing urban crime to metastasize harms the enemies of the Regime, and the criminals themselves are very much the Regime’s friends—the BLM riots have shown us just how useful and loyal they are to the Regime. It is no coincidence that every arsonist looter Kyle Rittenhouse justifiably shot was a criminal. The foot soldiers of Leftism, from 1789 to 1917 to today, are always criminals, the “useful idiots.” Meanwhile, guys in F-250s flying MAGA flags that have a braced AR pistol? The Regime would love any excuse to throw guys like that in prison.

Speaking of Rittenhouse, that needs to be your example of how the Globalist Total State works. Good, decent people will be prosecuted to the fullest extent of the law, while criminals in service of the Regime will always be let off the hook. Instead of whining like Ben Shapiro or other Con, Inc. grift artists, “wow, look at the hypocrisy, imagine if the situation were reversed,” you need to understand that the hypocrisy is the point. Besides, no “third party” will see their hypocrisy and put things right. No referee will see how unfair things are and take apart the regime. The political power to do that is possessed almost entirely by our enemies.

But it is not as though there is no hope. I am pointing out the realities of our situation not to discourage you but to direct you to right action. In 2020, (at least) 80 million people voted for an imperfect man who attempted to represent many of our interests. Even with the rapid replacement of those 80 million by millions of illegals in the last two years, that is a massive number of people, and their existence is the single, most outstanding liability to the regime (hence the aggressive plan for demographic replacement). The problem with the 80 million is that despite their great numbers and not insignificant collective wealth, they are wholly disorganized, like sheep without a shepherd. The political party that ostensibly represents them, the GOP, is horribly corrupt and ineffective. Their churches—the organization of local political organizing for the first 300 years of American history—are emasculated and led by men terrified of offending anyone (other than white, straight, Christian men). They usually are isolated with very few friends in real life. All of this is by design. The Regime has the 80 million right where it wants them. The question is, what if it didn’t?

What if our churches were led by men who feared God alone who instead of giving weekly inoffensive TED talks between soft rock concerts were able to rally together the men of his local community who understand that we are dominated by people who hate us? What if our pastors preached the authority of King Jesus over all of life, including the Regime and its treacherous Administrative State? What if in those local communities, all those enemies of the Regime gathered together? What if they began to live and work together as a city-within-their-city, a small-town-within-their-small-town? What if all these men and families began to develop strong bonds around their faith in Christ and devotion to one another? What would happen if communities like this were built up in every town and suburban neighborhood in the country, and all of them were at least loosely connected together? What would happen if each of them began to take leadership in their local GOP, their city council, their county commissioners board, their sheriff’s office, their county prosecutor’s office, etc.?

In 2008, we all laughed when this skinny black dude from Chicago’s only job he ever had was “community organizer.” It sounded like a made-up, make-work job for a deadbeat Ivy League grad. And while Obama himself may well have been a deadbeat, the role he held was anything but worthless. The Regime is as well organized as it is because it has legions of such people. There is no end to the Regime funding of NGOs to drive their various causes to destroy all that is true, good, and beautiful and to make life miserable for decent, productive people. Meanwhile, those proper, hardworking, ordinary people are isolated and alone—sheep ready to be devoured by obese, purple-haired, septum-pierced wolves.

But it doesn’t have to be this way. The Greek word that Jesus used that we translate as “church” in our Bibles is ekklesia. In Ancient Greece, this was the assembly of citizens who ruled the Greek city-states. What is the church in the New Testament? It is a parallel society within the existing society. It is the heavenly city within the earthly city. It is the city obeying God’s will on earth as it obeyed in heaven. Far from mocking the function of “community organizing,” Christ has given us the responsibility to organize heavenly communities here on earth. When Christians begin to realize this and the tens of millions of us are no longer isolated and alone, we will no longer be sitting and waiting to be consumed by the Regime and its minions like the ATF. Instead, we will be a well-organized, nation-within-the-nation, and the worst fears of the godless Regime will be realized. So, find good churches. Plant them if they do not exist near you. Find like-minded Christian men. Build communities in real life. Build a new Christian nation. Build a Parallel Christian Society so that your children will no longer be under the thumb of tyrants.