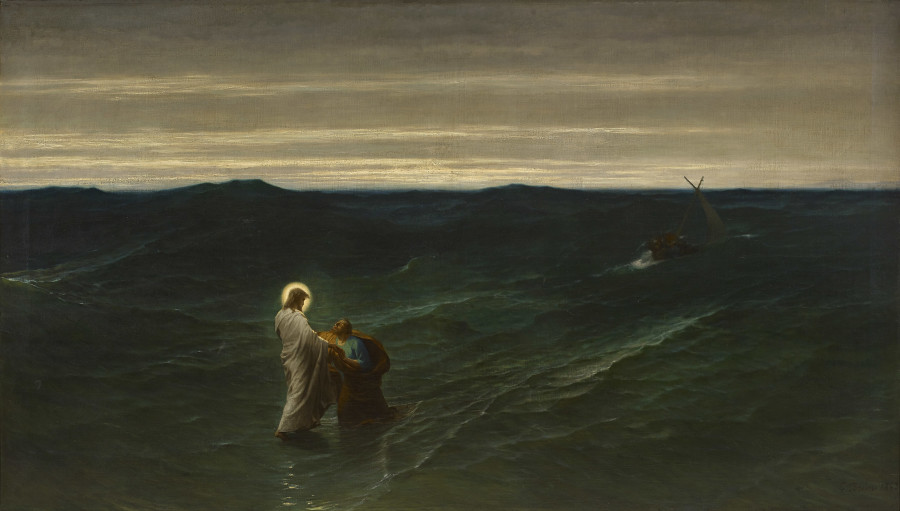 We have just finished celebrating the Christmas season. The nativity story is fresh in our minds. Maybe the decorations are still displayed in our homes. The first words from heaven that would herald the birth of our Savior were from the angel Gabriel to the Virgin Mary:

A similar greeting was extended to the husband of her cousin, announcing the birth of the
Baptist, who would prepare the way for Jesus:

“Fear not, Zacharias: for thy prayer is heard; and thy wife Elisabeth shall bear thee a son, and thou shalt call his name John.” (Luke 1:13)

Months later, this same heavenly greeting was extended to the shepherds, watching their flocks:

“Fear not: for, behold, I bring you good tidings of great joy, which shall be to all people. For unto you is born this day in the city of David a Saviour, which is Christ the Lord.” (Luke 2:10-11)

When I think of Christlike attributes, the typical list comes to mind: faith, hope, charity, patience, humility, and obedience. So it is odd to read when Christ cautioned his disciples:

At first pass, this may seem out of character for The Prince of Peace. He was known to channel his disgust into a leather whip and overturned merchant tables within the temple walls. These merchants were defiling the temple, turning the house of God into a marketplace, and Jesus defended it boldly. These two scriptural accounts display a dimension of Jesus that is seldom talked about. While I would never associate violence with Jesus, this does give a glimpse into what it means to exercise righteous indignation. Jesus also reminded us that: “[he was not] come to destroy the law, or the prophets…but to fulfill.” Sometimes in order to plant a new crop, however, you have to harrow up the field. You have to remove the overgrown weeds and rocks, and nourish the soil that has gone barren.

Jesus was revolutionary. A disruptive push against the status quo. A threat to the existing religious and secular leadership. A breath of fresh air in a world stagnating in the wicked traditions of their fathers. It was not easy to walk with Christ, and even more difficult to remain with Christ. Early in His ministry, despite performing miracles in front of thousands of people, there were still those who, unable to fully accept His teachings, “went back and walked no more with him.” With our perfect vision of hindsight, it boggles the mind that people could witness these miracles and not continue to follow Him. In two recorded chapters of Matthew alone, Jesus remotely healed a paralytic servant in one of the first documented telemedicine visits, stopped an infection in Peter’s mother, cast out devils and evil spirits, awoke from a nap to rebuke the sea and command a tempest, sent demons out of two men into a herd of swine, raised a young girl from the dead, gave sight to two blind men, and cleansed a leper.

Being in the presence of, let alone touching, a leper was an extreme breach of the cultural norm. These poor individuals were cast out from society—the original Social Distancers. For Christ to approach a person with leprosy and heal them was unheard of. But he did it, and in that act demonstrated to the world that faith was more powerful than fear.

Despite witnessing these miracles, even Peter—Jesus’ Rock—shows us how quickly we can lose faith. Faith compelled Peter over the edge of the boat and onto the surface of the water:

“But when he saw the wind boisterous, he was afraid, and beginning to sink, he cried, saying, Lord, save me. And immediately Jesus stretched forth his hand and caught him, and said unto him, O thou of little faith, wherefore didst thou doubt?” (Matthew 14:29-30)

Nearing the end of Jesus’ ministry, and before He suffered in the garden, Peter was told that he would deny Jesus by the next morning. Emphatically, Peter denied the prophecy. Later, at the crow of the rooster, Peter acknowledged his denial of Jesus and fled the scene, weeping bitterly. (Matthew 26:34-35, 69-75)

One of the core principles of the Gospel of Jesus Christ is faith. We learn from His teachings that where there is fear, often faith is lacking. In his letters to the Hebrews, Paul teaches us that “faith is the substance of things hoped for, the evidence of things not seen.” Fear, on the other hand, is the paralyzing substance of things imagined, the evidence of the hand of God not recognized. We also learn from John that “there is no fear in love, but perfect love casteth out fear”. If we love God and his son Jesus Christ, there will be no room in our hearts for fear. Like Elisha and his young servant, the mountains around us are filled with unseen horses and chariots of fire standing at the ready to protect us. In the words of the Old Testament prophet, we can take solace in the admonition: “Fear not: for they that be with us are more than they that be with them.” If we love God, and if we put our faith in His son, Jesus Christ, we will be protected from harm.

When our trust is in our God, nothing can shake our faith. Nothing can stop us. The prophet Jeremiah, who was sanctified by the Lord and ordained a prophet while still developing in his mother’s womb warned that:

“Cursed be the man that trusteth in man, and maketh flesh his arm, and whose heart departeth from the Lord… Blessed is the man that trusteth in the Lord, and whose hope the Lord is. For he shall be as a tree planted by the waters, and that spreadeth out her roots by the river, and shall not see when heat cometh, but her leaf shall be free; and shall not be careful in the year of drought, neither shall cease from yielding fruit.” (Jeremiah 17:5, 7-8)

When our faith and trust are placed in God and His Son Jesus Christ rather than our fellow men, our efforts will be blessed. We will be fruitful even in dire circumstances. Our branches will flourish when our faith does not falter.

With our faith rightly placed in God, we need not even fear death. This can be observed well in the way Jesus handled himself in the days and hours leading up to his crucifixion. When the mob came for him, Peter panicked, drew his sword, and cut off a man’s ear. In the commotion, Jesus did not flee, but instead, He made the injured man whole. Isaiah prophesied of these moments when he said “He was oppressed, and he was afflicted, yet he opened not his mouth: he is brought as a lamb to the slaughter, and as a sheep before her shearers is dumb, so he opened not his mouth.” (Isaiah 53:7) Jesus knew what He came to this earth to do. And though He would have liked to pass the cup, He drank deeply and perfectly.

In the months leading up to his crucifixion, Christ taught His apostles of the futility of fear, even when facing physical death. Here, we also find the only scriptural account of Jesus telling us who we should fear: “And I say unto you my friends, Be not afraid of them that kill the body, and after that have no more that they can do. But I will forewarn you whom ye shall fear: Fear him, which after he hath killed hath power to cast into hell; yea, I say unto you, Fear him.” (Luke 12:4-5)

As we navigate into a new year, let us move forward in faith and love. Let us make decisions for ourselves and our families on a foundation of faith rather than fear. Let us not forget the words of the prayer: “God, grant me the serenity to accept the things that I cannot change, courage to change the things I can, and wisdom to know the difference.” There is much in our world that we cannot change. There is much in our personal lives that we can change.

It is interesting to learn that when our brain is overcome with anxiety and fear, our decision-making ability is hampered. Fear is an emotion that is processed through the Limbic System, and specifically in a structure called the amygdalae. Short-term activation of these structures are what drive the “fight or flight” response, and can be beneficial to keeping us safe. Long-term, persistent activation of the fear centers of our brain will effectively shut down activity in the frontal lobe—the portion of the brain that is responsible for regulating thought, reasoning, movement, decision-making, and planning. When the amygdalae drives behavior, rational decision making is near impossible. It’s almost as if we surrender our agency to choose our actions when we are driven by fear.

Anxiety and fear have been at an all-time high for as long as some of us can remember. The wind is truly boisterous, and we are frequently tempted to scream up to the heavens, “Master, carest thou not that we perish?” Some of us may even think that God sleeps and has forgotten us. I testify that He does not sleep. In many cases, like the servant of Elisha, it is our eyes that are clouded by fear, distracted by the enemy’s armies that surround us every day. Pouring into our homes through the television and Internet. Striking fear into our hearts on a daily basis.

Jesus spoke of our day when he told His disciples of the condition of the world before His second coming. He warned that “…there shall be signs in the sun, and in the moon, and in the stars; and upon the earth distress of nations, with perplexity; the sea and the waves roaring; Men’s hearts failing them for fear, and for looking after those things which are coming on the earth: for the powers of heaven shall be shaken.” (Luke 21:25-26)

May our hearts not be troubled, neither let them be afraid. Rather, may our hearts be filled with love and our eyes trained in faith to look upon the Savior rather than be distracted by the waves crashing around us. I know that God loves us. And because He loves us, He sent His Son to die for us so that we too may break the bonds of death and return to live with Him again. Nothing can stop the kingdom of God from rolling forth. I witness the words given to Timothy by Paul:

Let us fearlessly move forward into this new year and enjoy the ride in faith.

Dr. Alan Bradford is a Father, Christian, and Naturopathic Medical Doctor. Specializing in hormone optimization, integrative diabetes care, natural treatments for chronic pain, and acupuncture for addiction. Co-host of Community Guidelines, a weekly podcast about #InformedConsent, #MedicalFreedom, and #NaturalMedicine. To connect with him on social media see Gab and Instagram.